Even for a show that frequently dabbles in mysterious, unfathomable phenomena, this finale is egg-stremely bizarre. Welcome back to… The Twilight Zone.

“You Might Also Like” tells the story of one woman’s confusion over periodic blackouts and her neighborhood’s obsession with strange eggs that carry big promises. “The Egg will make everything OK again, and this time it will be OK forever.” Confused? A little scared? So were we. Read on for the highlights.

Janet Warren (Boardwalk Empire‘s Gretchen Mol) wakes up in her pristine bedroom looking out of it. She details to her friend Mrs. Jones (Russian Doll‘s Greta Lee) that she’s been blacking out and losing chunks of time. It happens after she hears a sequence of chords, followed by a whooshing sound, then she wakes up in bed like nothing ever happened. The women then anticipate getting “their egg,” but we’re kept in the dark… for now.

This feels like as good a place as any for The Narrator to swing through with his usual ominous offering:

“Submitted for your approval, Mrs. Janet Warren. A woman who had seemed to have everything. Every. Thing,” he says. “But possessions have weight and we can’t carry them all at the same time. Especially when taking an unscheduled trip… into The Twilight Zone.”

PART ONE: IT’S UGLY | The women wake up in Janet’s bed, and Mrs. Jones is equally confused as to what just occurred. Janet says she saw the egg in a commercial in her head and it’s ugly. She wonders if the egg has something to do with whatever’s happening to them. Her friend leaves (but not before Janet physically tries dragging her back), and Janet is left with only a small odd twig she found in her hair.

PART TWO: REAL. HUMAN. BEING. | Janet calls her husband, but he’s in a meeting. She asks Megan, his secretary, why someone would want their family’s egg. Megan says that the world is not OK, and she wants her egg so that everything can be OK again. Okaaay.

Janet calls someone at the fulfillment center to ask more questions, but when she’s put on hold, her neighbor screeches up the road. She has an egg, and she refuses to let Janet see it. Janet eventually asks the operator if she can cancel her family’s egg, and though the voice says they are processing her request, the line disconnects before confirming.

Back inside, she walks into a nursery that has a crib and a baby monitor. She sets up the monitor in her own bedroom so she can record the freaky-deaky happenings. In the kitchen, she starts to cry, and immediately finds herself in the middle of a paper towel commercial.

Cut to: waking up in her bed again. When she checks the monitor footage, she sees herself floating toward the window like some scene from Poltergeist. The weird keeps getting weirder. 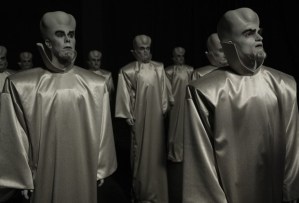 PART THREE: THE MADWOMAN IN THE OXYGEN TOWER | Janet calls Chantal, a stargazing shaman, and tells her she thinks she’s been abducted. Chantal tells her to resist gravity, which sparks an idea. She tethers herself to a chair, but when night falls, she once again floats toward the window and outside, where three aliens watch her. They look like a mix between Conehead wannabes and the martians from Mars Attacks!, and to make matters even stranger, they all speak simultaneously, without any mouth movement whatsoever.

They start talking about how “the leg is its best piece,” and quip about being hungry. They decide to go original recipe over extra crispy, and oh my god, what am I even typing right now? They start scheming, but Janet cuts them off. “You can’t just pull us out of our lives, you know!” She demands to be taken to their “supervisor.” K.

PART FOUR: LIKE THE GREAT GLITTERING CITIES OF YOUR WORLD | Janet appears on a screen that is being watched by heaps of alien beings. She talks about her childhood, and reveals she recently delivered a stillborn, which was very hard on her. She talks about hating her house and their cars, and how she wishes she had different things. The supervisor says they’re afraid of how often humans change their minds. The aliens’ minds are one collective, and changing it would require the same energy needed to reverse the flow of the Mississippi River. The being admits to monitoring humans since 1945, when radio first started. They tried to learn about humans by studying TV commercials, but struggled to make any sense of it. 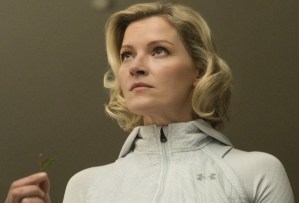 The being then says that Janet only wants something she doesn’t have. “We can see your wanting from space,” it says. Then it clicks. The being must know what the egg is; in fact, the supervisor laid all of the eggs, so that everything could be OK again. OK forever. And that’s because there won’t be any human beings around to change their minds about it. We then watch Mrs. Jones collapse off-screen as a glittery, bloody substance spreads throughout her home like a gas.

Janet asks if she can go home, but they tell her she’ll be safe with them. She still wants to make her designated fulfillment center appointment to get her egg. “You understand your egg is a spawn designed to eradicate the human race.” Yep. She gets it, but she still craves the blissful ignorance the egg can provide her. “I just want to hold it. Even for a little while… because it’s… well, it’s mine.”

She wakes up in her bed to the sounds of sirens and screaming outside. In the nursery, she talks to the crib saying, “It would be much, much better if it was you who was coming home with me today.” She gets in her car and starts driving down the street as chaos erupts around her. It’s the middle of a friggin’ apocalypse, yet Janet is still determined to get her egg. The Skyliners’ “Since I Don’t Have You” plays as Janet runs into the center. Spaceships hover above her, as plumes of smoke rise from the earth.

“Existential dread got you down? Well, Mrs. Janet Warren finally found relief, albeit, for a limited-time only. But buyer beware: All sales are final here… in the Twilight Zone.”

What did you think of the finale and which Season 2 episode was your fave? Grade it and the overall season, then drop some comments below!