This week on TNT’s Snowpiercer, things took a turn for the extrajudicially dark as Melanie grew desperate in her search for Layton. Elsewhere, the Folgers aimed to recruit a major player for their coup.

Indeed, this was a dark episode, and I don’t know if it’s because of the times we are now living in, but it almost seemed to be needlessly so. Like, the writing didn’t quite justify it. Melanie had put out feelers throughout the train, trying to get a bead in Layton, and she even hauled in Terence-the-Janitor to enlist his allegiance (or else she does something about the suspension drugs he pinched from the drawers). Ultimately it was Zarah — under the threat of having the privilege to have her baby revoked — who led Melanie to the tail, where she ID’d the woman who helped Layton escape and likely knows what he is up to next. 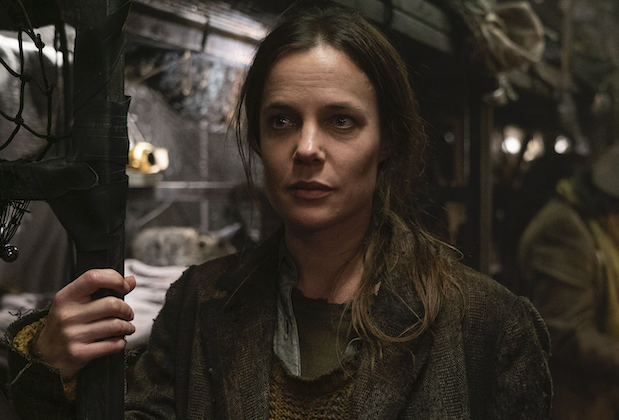 Melanie brought Josie up-train to an interrogation room, alone — purposely keeping out Till, of whom she is now a bit wary — and leaned hard on Layton’s lady for his whereabouts. When Josie refused to cooperate, Melanie used a nozzled hose, connected to the exterior of the train, to freeze Josie’s pinky… and then smash it off with a handy hammer. Now, even Melanie couldn’t stomach the extreme to which she had gone — she left the room to go hurl in her private lavatory. While she was gone, a suspicious Till talked her way into the interrogation room, aghast to find what she did. Till lamented that she could do little to help Josie, under the circumstances, but Josie nonetheless appreciated her concern. Josie had but one request of her new friend Bess, before she left….

When Melanie returned to the room, she discovered that Josie’s entire right hand had been frozen. Josie then (gulp) broke free of her cuffs by snapping (!) that hand off, and lunged for Melanie. A scuffle ensued, during which the hose got knocked loose from its wall connector, allowing frigid air to seep in. In the end, Melanie gained the upper hand, slipped out of the room and slammed the door shut behind her, leaving Josie to freeze to death in the instantly arctic room.

In the aftermath, as a means to maintain some leverage over Andre and all that he knows, Melanie officially welcomed Miles to the engineers’ section of the train, unaware that Josie had secretly met up with the lad earlier and affirmed his role in the revolutionary cause. Till meanwhile was seen joining up with the revolutionaries.

As for Andre… well, he spent most of the episode trying to recruit thirdies to his cause, though they were pretty skittish. After all, unlike the tails, they have something, and they’re rightly skeptical that his vision of “one united class” is attainable. Even opportunistic Terence took a pass. Later, when Andre learned from Till of Josie’s fate, we saw him howling in anguish inside one of the Night Car’s treatment rooms. And at episode’s end, none other than LJ Folger was summoned to that same room, where Andre clearly has plans for the mayhem-loving first-class brat.

Ruth — out of her stuffy uniform on a day off — was chatted up and invited to lunch by Commander Grey. As they settled in at a primo table in the Ocean Car, we learned how Mr. Wilford (a “peculiar-looking man”) approached Ruth at the bed-and-breakfast she ran back in the day, and offered her a job, and that Grey is a widower whose wife passed two years ago. But then Grey’s other agenda became clear, when Mr. and Mrs. Folger arrived. The three asked Ruth quite plainly if she would be game for stepping up as the train’s new manager, if they manage to oust Melanie from the position. Ruth seemed bearish on the notion at first, but when Melanie later spoke rudely to her (and mocked her B&Beginnings!), we got the sense that any loyalty Ruth felt to the hospitality chief just went poof.

What did you think of the episode “The Universe Is Indifferent”?