This Friday in Harley Quinn‘s Season 2 finale, Ivy and Kite Man were heading for a wedding. But did their big day go off without a hitch?

Coming out of last week’s eventful episode — in which Doctor Psycho’s scheme was scuttled and Harley and Darkseid arrived at a truce — the Cupid of Crime is back behind bars at Arkham, feeling mighty low. Ivy, meanwhile, is scrambling to clean up the mess made last week when Doctor Psycho revealed to all what transpired (…multiple times) between Ivy and Harley during the bachelorette weekend.

“I f–ked up,” Ivy said to her intended, describing the hook-up both a “stupid fling” and “mistake.” As a sign of good faith and intentions, Ivy then steered Kite Man to The Old Corn Factory — his dream wedding venue! — which she secured by, well, having Frank the Plant wolf down the Condiment King.

In the course of being escorted back to Arkham, Two-Face encouraged Commissioner Gordon to run for mayor, seeing as he just got snubbed, again, at a “key to the city” ceremony honoring the many supes. Thing is, the commish is seen as a cop but not a hero, so he could benefit from a bravura act. Luckily, Two-Face has handy the guest list for Ivy’s wedding, and it is stacked with supervillains…. 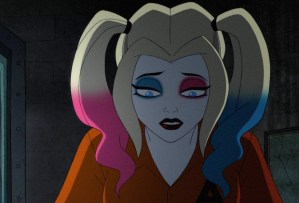 Two-Face later plays Harley, trading a tip on Gordon’s plan to disrupt the wedding for her help with a prison escape. Harley agrees, saying, “If I can’t f–k up Ivy’s wedding, no one can!” Gordon meanwhile has convinced his officers to join in his plan for a massive bust. Arriving at the corn factory, the comissih KOs and poses as the bearded officiant, while his officers pass themselves off as cater waiters. Harley shows up, spoiling for a showdown with the commissioner, but instead gets corralled with Catwoman, Jennifer and other bridesmaids. Harley at one point breaks away to go after Gordon, but in a case of mistaken identity, lays out the venue rep instead. 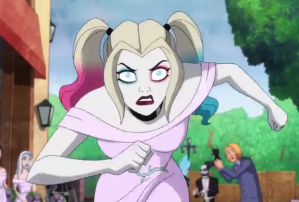 Ivy, exasperated by her BFF’s antics and cries of conspiracy (while already anxious about locking into a life with Kite Man), yells at Harley, saying that she is sick of managing everyone else’s feelings. “Your friendship means the world to me,” Ivy avows, but she has come to realize she cannot have her cake and eat it too. “I don’t want you to be here,” she tells Harley. Crestfallen, Harley slinks away… but in doing so, takes notice that the wedding flowers are all plastic….

The ceremony gets underway, and Kite Man launches into his very thorough vows about a life with “four kids” and long nights spent watching “premium streaming content.” “You are the wind beneath my kite,” he obviously concludes. Ivy, in the wake of the “very specific picture” her fiance painted, finds herself at a loss for similarly flowery words.

Meanwhile, Jennifer spots Harley and assumes she means to stop the last wedding at which she’ll be young enough to be a bridesmaid, so she puts her cardio barre classes to use by clocking her. Noticing that one of the caterers is standing in the back at the wedding, Harley creates a commotion, prompting “clergyman” Gordon and his minions to decide the jig is up, announce the mass arrest and trigger knockout gas in the fake florals. As Kite Man sobs over his spoilt day, Harley grabs a bazooka and uses it to blast open the skylights, allowing the gas to dissipate. Once the air clears, the arriving news crew that Gordon had tipped off only sees him running away from the awakening villains, his “hero” moment lost.

As the mass melee continues outside (did I spot a stray peridemon?) and as Clayface strives to impress wedding guest Tim Burton with his vocal stylings, Harley hunkers down with Ivy and Kite Man to reveal that she got ordained online and is ready to marry them right there and then! The groom, however, announces that he is fed up with it all — he saw Ivy’s face at the altar, and as hard as it is to admit, he is not the right person for her. With the cops closing in, Harley and Ivy aim to make a getaway in the “Just Married!” car. As they navigate the venue’s maze of a parking lot, Ivy admits that she has been denying herself. She says that people do change, and that Harley has come to show her the Harley she has always wanted to see.

“You’re trying to grow, and actually doing it,” Ivy effuses. “That’s what matters.” 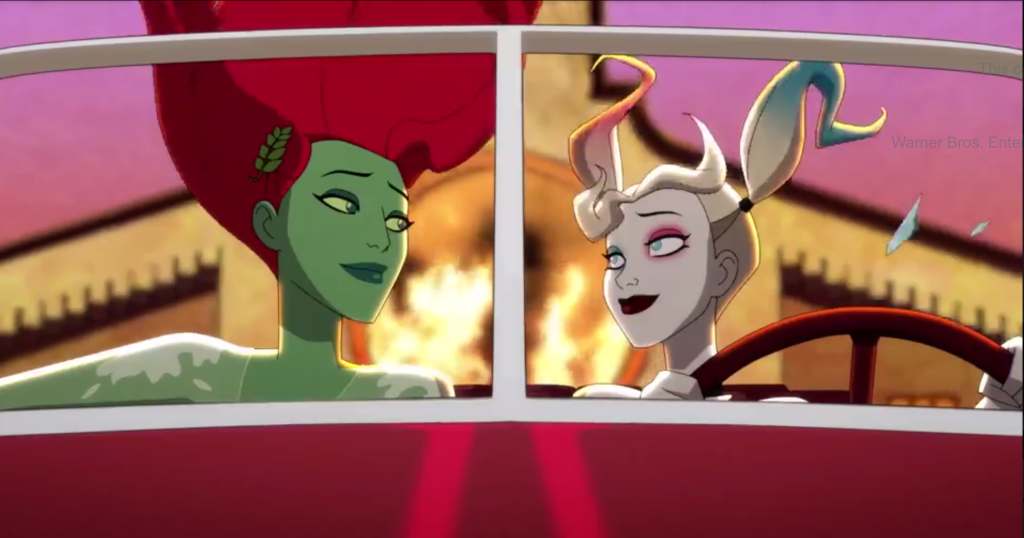 “I love you,” Harley declares. And though it took Ivy a scary half-second to echo the sentiment, she for once did: “I love you, too.” The ladies then managed a sweet liplock as their car careened onto the road leading away from the corn factory, and a “The End?” title card popped up.

What did you think of “The Runaway Bridesmaid” and Season 2 as a whole?