Hearing voices in your head could mean a few things. Madness, divine inspiration… or maybe you’ve entered The Twilight Zone.

Yep, Jordan Peele’s TZ revival is back with more macabre twists, psychological horror and inexplicable sci-fi happenings. With all 10 new episodes now available to stream on CBS All Access, we’re breaking down the anthology series’ Season 2 premiere, in which a man loses his mind trying to forge a human connection. And this episode does not disappoint. Here are the highlights of “Meet in the Middle.”

Lonely bachelor Phil (Westworld’s Jimmi Simpson) appears fidgety and nervous while on a date with a woman at a restaurant. As she drones on about squid-ink paella, he begins hearing another woman’s voice inside his head (the voice of Community’s Gillian Jacobs, as a matter of fact). As they begin to communicate telepathically, Phil panics, thinking that he’s gone crazy, and excuses himself to the bathroom. Both he and the mystery woman become highly agitated and promise they’ll stop talking to each other. Silence falls for a few seconds before our host and narrator, Peele, appears in the mirror, telling us that a voice in your head could be a case of crossed wires, “one made through the tangled, enigmatic switchboards of the Twilight Zone.” (Cue the music!) 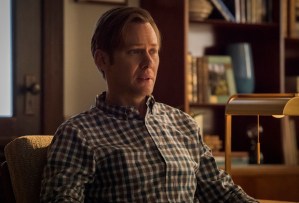 Of course, the voice doesn’t leave Phil, and he broaches the subject the next day in therapy. His therapist thinks the voice could be a coping mechanism that he conjured up in order to get out of a boring date. She then asks if he’s ever heard of Dissociative Identity Disorder, but at that point, the voice cuts through his session, making Phil look like quite the lunatic. As his therapist is mid-sentence, he even gets up and leaves the room.

While out for coffee, he asks the voice if she can see what he sees (it’s a negative), but over time, the conversation becomes comfortable and flirtatious. We find out that the woman’s name is Annie and that she thinks “there is something kind of romantic about all this. We’re hundreds of miles away from each other, yet here we are having this crazy psychic connection.” She makes him promise not to look her up and “ruin this whole You’ve Got Mail moment” that they’re sharing.

From there, the twosome get along swimmingly, sharing mundane thoughts and preferences, and giggling with each other throughout their conversation. When Phil later suggests they meet in person, Annie gets dodgy and shuts it down. Phil then breaks his promise and looks her up on social media, only to find out that she’s married. She feels betrayed, but in his defense, it’s a pretty big detail to leave out. Annie says that she feels trapped in her marriage; her husband isn’t a great guy. “I’ve never met someone who gets me like you do, Phil,” she tells him. The two later deduce that there must be some reason for their connection, even if they’re not exactly sure what it is.

The next morning, Annie tries to break it off, telling Phil they’re in too deep, which sends him on a downward spiral of tears and loneliness. While he’s on a date with a barista, Annie pops back into his brain. She misses him and is ready for her life to begin. She wants to meet up, a change of heart that causes Phil to joyously scream out loud in the middle of the restaurant like… well, a crazy person.

Later, Phil is elated to be on a train heading to meet Annie… until she tells him a creepy guy is eyeing her on her train. She starts panicking and gets off at her next stop, but the creepster follows her and gets off, too. Annie screams as she’s abducted, causing Phil to completely blow a gasket.

He gets off at the same station Annie bailed out on, and frantically starts searching. He finds her cracked glasses, just as Annie awakens, telling him she’s in a dark location which might be the woods. He finds a house in the middle of the forest and knocks on the door. After confirming with Annie that the guy who took her had a beard and a plaid shirt, Phil attacks the homeowner and reduces him to a bloody pulp.

As Phil looks down at his horrific deed, he hears a little girl call out behind him… and right behind her is Annie. She clearly doesn’t know who Phil is (or does she?). She grabs a butcher knife and tells the girl to run to her room. Just then, the police bust through the door to find a bloodied, psychotic-looking Phil. After Annie tells them he broke into her home, he’s handcuffed and put in a cop car. Only then does Phil begin to think that his therapist was right — he’s gone mad and he killed a guy for no reason. That is, he thinks that until Annie pops back into his head. “I’ve been waiting for this day for a long time. I told you it was complicated,” she says. “You saved us. Now my life can finally begin, all because of you.”

Finally, our trusty narrator returns to close out the episode: “What kind of compromise goes into connecting with another human being? Is it meeting in the middle or going all the way to the end of the line? Phillip Hayes found connection, but only with the darkest part of his soul. A region of self he’ll inhabit for the rest of his life, here… in the Twilight Zone.”

What did you think of the wicked twist in The Twilight Zone’s premiere? Grade the episode below, then drop some comments!