Unfortunately, that emotional trailer for The Bold Type‘s new season wasn’t a misdirect: During Thursday’s episode, newly pregnant Sutton and her husband Richard suffer a heartbreaking loss when they go for their first ultrasound. At the appointment, the doctor informs the expectant parents that their baby doesn’t have a heartbeat and that Sutton will have a miscarriage within the next 48 hours.

Richard is wonderfully supportive — he just gave her a baby book that morning as a gift, sniff! — while Kat and Jane keep tabs on their friend. Sutton secretly busies herself in work by taking on a stylist job, dressing a 4-year-old for his kindergarten graduation. “I have to do it because I don’t feel anything,” she explains to Kat and Jane. “I just keep waiting for this tidal wave of emotions to hit me. I’m not angry or mad or sad or any of the things that you’re supposed to be about a miscarriage. I feel numb, and I really don’t want to feel numb, so I’m gonna go dress this little boy. Maybe then…” She’ll feel something, Kat finishes.

Of course, while Sutton is bonding with the cute child, who adorably thanks her for making him feel important, she starts to experience painful cramps. At home, she apologizes to Richard, who reassures his crying wife that what’s happening isn’t her fault. But there seems to be more that she isn’t saying. 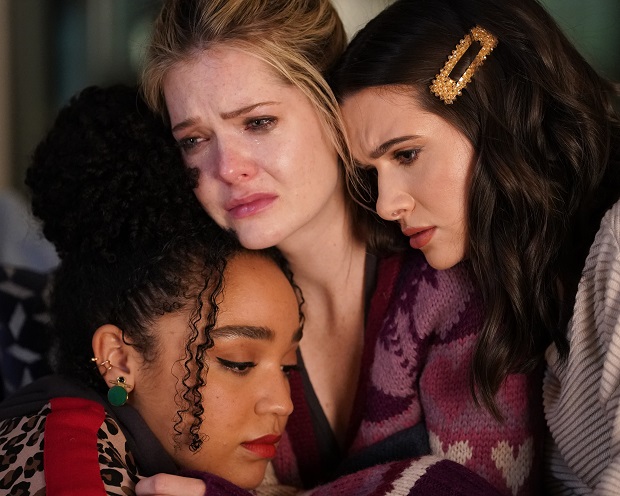 Meanwhile, Kat and Jane receive a text from Sutton: “I need you guys.” They rush over to find her in tears on the couch. As the girls try to comfort their pal, Sutton confesses that she feels relieved that she isn’t having the baby. She wonders if that makes her a terrible person. It doesn’t, Kat and Jane respond as they embrace an emotional Sutton.

* Jane’s libido returns, but when the guy she’s hooking up with starts to feel her up, she freaks out. Despite having wonderful friends, she still feels alone in what she’s going through after her mastectomy, so Scott advises her to find a group of people who understand her struggles, which she does.

* Kat pitches an interview podcast to The Belle’s brass, with the hopes of making a difference. But with her funds low, she has to sell off her belongings to buy equipment for the test podcast. (Don’t worry, Jane rescues her beloved couch.)

* After learning that Jacqueline rekindled things with her ex-boyfriend during their separation, her husband sets out to prove that he, too, sees her, with a romantic photo shoot.

Were you surprised by Sutton’s tragic loss? How do you think her confession will affect her marriage? Hit the comments with your thoughts!