A rat making out with a cockroach was just the tip of the iceberg for Doom Patrol. The outlandish series, which drops the first three episodes of Season 2 on both DC Universe and HBO Max this Thursday, promises to be even more ridiculous the second time around — especially now that the titular crew is (temporarily) bite-sized.

“That was one of my favorite sets ever built,” April Bowlby (aka Rita) says of the now-tiny Doom Patrol’s new surroundings. “We basically live on Robotman’s race track, so they had to build a big version of that. It’s incredible. And Larry has to feed us, but I’ll leave it to your imagination to guess how he does that. We have these little tents and fake trees — it’s like Honey, I Shrunk the Kids, and it’s fabulous.”

Read on for more of the Doom Patrol cast’s Season 2 teases, which TVLine gleaned during a recent (pre-pandemic!) visit to the show’s Atlanta set: 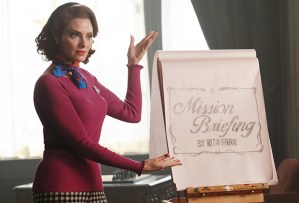 RITA’S NEW ROLE | When the rest of the Doom Patrol basically steals Rita’s M.O. (“which is to be broken and to be a victim”), she decides to “step up and take the position of leader,” Bowlby teases. “It doesn’t go so well, but at least she tries!” Rita will also continue to deal with “generational trauma. She’s looking her into her past, taking responsibility for what she did. She’s beginning to accept what she can and can’t control. It’s rough.” As for Rita’s new dynamic with Niles, Bowlby welcomes the major shift. “It gives Rita permission to go on her own and not be hand-fed information anymore. She doesn’t feel like she has a safe place with Niles anymore, which is part of the growth she experiences.”

JANE’S INNER DEMONS | “You’ll see more of what makes Jane Jane,” Diane Guerrero says of Season 2. “It’s an entire lifetime, probably more. So it’s a lot to explore.” Like many of her fellow Doom Patrollers, Jane has a “heartbreaking” reaction to Niles’ betrayal, which triggers a stream of “ups and downs” for the already fragile character. “We think we’re the babies, and we’re his children, but there’s one more person who’s [his actual] daughter,” she says. “It adds a new color to the show.” And speaking of Niles’ secret offspring… 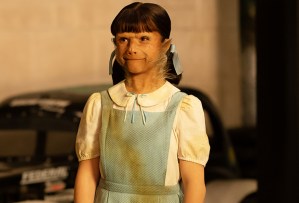 DOROTHY’S RUDE AWAKENING | Abigail Shapiro’s oft-mentioned character is poised to make a hell of an entrance in Season 2 — and she’s not alone. Thanks to Dorothy’s ability to “manifest beings,” she has a “coterie of imaginary friends, some of which can be very dangerous,” Shapiro says. “They’re very unusual looking. She doesn’t think they are, but to everyone else, [they seem] quite strange.” Shapiro says she did a lot of research on what happens to children when they’re hidden away for so long. “Emotionally, they stay the same,” she explains. “So Dorothy is emotionally still 11 years old. When she’s finally out and about, she learns that she has to grow up now.”

NILES’ ROAD TO REDEMPTION | As for the man of the hour, Timothy Dalton reminds us that “a leopard doesn’t change his spots, but a leopard can change his understanding of things. You can fall in love with something you created, but that doesn’t stop you from using it.” Though he can’t promise that Niles will suddenly start making all the right decisions, Dalton acknowledges that his character “has been awakened to the fact that his creations are suffering. He wants to make amends.” He is also excited for us to meet his on-screen daughter, promising that audiences will “fall in love with her. Niles’ care for Dorothy drives a lot of what happens this season.” 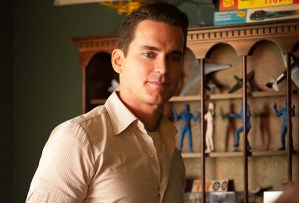 LARRY’S TRUTH HURTS | While Matt Bomer acknowledges that “the spirit was able to help Larry open up to himself in new ways, Larry is still dealing with the fallout from the choices he made in his life, the trail he left behind of the people he affected by not being his most honest self.” He describes Larry’s journey as a “one step forward, two steps back” situation. “At the end of the season, he felt like he really accomplished something and move onto a certain place with himself — and he has. He’s able to have candid conversations with people this season that he never would have been able to have in the first season. But he also is constantly reminded of how much work he has to do, both on himself and healing his relationships with others.” And while Bomer can’t say whether we’ll get another full-blown musical moment this season, he teases, “For those who love music, I think they’ll get their itch scratched.”

VIC’S PROMISE | Vic’s past “continues to haunt him” in Season 2, Joivan Wade says, adding that “it’s a big part of what takes him to the next level of his life. After [Episode 12], we didn’t really go back to explore what happened when he nearly killed his own dad. We didn’t see where that left him.” That will be addressed in Season 2, and we’ll see “how that allows [Vic] to go to the next level of being this young man who is trying to fulfill all of these these dreams and this pledge to his mom. He is forced to continuously deal with this. He definitely finds ways to cope with it and use it to his strengths.”

What are your hopes for Doom Patrol Season 2? Drop ’em in a comment below. (And come back to TVLine tomorrow to discuss the premiere!)