This week on DC’s Stargirl, Courtney teamed with all of her recruits to get a bead on what the Injustice Society is up to in Blue Valley. How did that first mission go? And what did disapproving Pat have to say about it?

After getting a glimpse at how gym rat Lawrence “Crusher” Crock and Blue Valley High phys ed teacher Paula Brooks watch out for their ultra-competitive daughter, Artemis — by killing any football coach who dares to bench her! — we found Pat waiting for Courtney to come home and confront her about assigning out JSA costumes and tools to her friends. (The green lantern, for one, can kill you, he warns, though without a ring it is currently powerless.) Court admits that in addition to Rick aka Rex Tyler’s secret son being the new JSA’s Hourman, Beth and Yolanda have respectively taken on the Dr. Mid-Nite and Wildcat personae. An irked Pat tells Courtney to round up all the costumes and gadgets, lest her friends end up like Joey Zarick, and then stows away all the unused items (save for Thunderbolt, still sitting in Court’s pencil holder).

Jordan Mahkent, upon being texted (by Principal Bowin) that “the gym rats are at it again,” finds and confronts Crusher and Paula at the grave they just dug for the latest killed coach. When Paula grouses that they are tired of “the rotary club and bake sales,” Jordan invites them to suit up. “You’re back in action tonight.”

The next day, Pat finds Rick and tells him he knew his real dad. Pat shows him the truck he found, with his veritable fist print on it. “My uncle is a jerk,” Rick explains. Part contends that rex Tyler never used his powers in such a way, to which Rick counters, “Well, he’s dead.” Rick then taunts Pat by asking why he hasn’t yet stopped the people who killed Hourman. Pat shows Rick his father’s journal, but neither of them can make sense of any possible code. Rick insists on holding onto both the journal and the hourglass, despote Pat’s warnings about how tempting it can be to abuse powers. “What did Starman use you for?” scoffs Rick. “As far as I can tell, you don’t do anything!”

At school, Courtney tries to ask Beth and Yolanda for their JSA stuff back, but holds back when they each convey their joy/changed lives from having a purpose (or a new BFF in a pair of goggles). After school, Courtney catches up to the girls and Rick to revisit the issue, to which Rick counters: If Pat asks for your staff back, will you give it up? The debate is cut short by an “alarm” from “Chuck,” alerting Beth to the fact that someone from the ISA (The Gambler) is hacking into the Empire Enterprises system. Courtney balks when the others want to catch and interrogate the hacker, but when “Chuck” reports that The Gambler has no powers per se/is an “easy” target, she agrees to join in — provided they protect their identities by all suiting up. 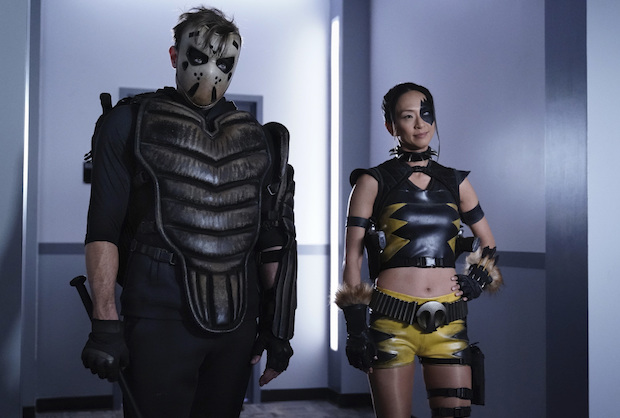 Arriving in costume outside Empire Enterprises, Beth/”Chuck” (do I need to keep putting “his” name in quotes?) crack the keypad code, after which the teens are rightly shook to find a dead guard inside. When Crusher and Paula show up as Sportsmaster and Tigress aka “Icicle’s attack dogs,” Hourman and Stargirl chase after and take on the former, while Wildcat goes toe-to-toe with the latter. Alas, Rick has far from mastered his power let alone fighting skills, so Sportsmaster and his assorted baseballs and pucks pretty easily fend off the kid. And at one point, Hourman is about to get crushed by a lobbed car, but Stargirl and her staff swoop in to save his bacon. Wildcat meanwhile suffers similar setbacks, wielding some nifty skills but wholly untrained on how to apply them — especially when Tigress busts out a crossbow. Luckily, “Chuck” cues Beth to fetch a nearby extinguisher and distract Tigress with its spray.

Back outside, Sportsmaster slaps a puck which sticks to Stargirl’s staff. Sensing its a bomb, the staff sails up to the sky before detonation — and then flitters, well-charred, down to the ground after (only to eventually “heal”). Just as it becomes all four kids plus an unexpected S.T.R.I.P.E. against the two baddies, Sportsmaster and Tigress get word that The Gambler has stolen the codes, so they slip away after deploying a smoke  bomb.

Back at the body shop after, Rick acknowledges that there is more to Pat than they thought, as the recruits stand in awe of the S.T.R.I.P.E. robot. Courtney meanwhile privately thanks Pat for showing up when he did, explaining that 1) the team didn’t listen to her, 2) she was just trying to help them, and 3) their actions were “a little frustrating and a lot annoying.” Amused by the irony of her observations, Pat simply nods, “My sentiment exactly,” before saying that she and her friends need training, that luck will only get them so far. Meaning, yes, this “new JSA” needn’t disband.

Meanwhile at the Injustice Society’s lair, it is established that they now have the equipment they need and the codes to run it. Brainwave is now the only missing part, and Virtuoso’s violin playing proved unable to wake him up. As for the JSA team now getting in their way and who these newcomers are, Icicle declares, “Let’s find out….”

Elsewhere this week, and I am admittedly sliiiightly curious to see where/is this is going: Mike slapped together a candy volcano for the middle school science fair. And though he told both his dad and Barbara that their attendance was not necessary, the truth is the lad was sullen to be the only student sans doting parents. As such, he was pleased when Barbara rushed over after American Dream work to witness his volcano demo.

Also, Jordan and his son Cameron slipped off to the diner to remember late wife/mother Christine’s birthday — a scene that mainly served to tease that Cameron has cold breath, as he blew out the candle on a gratis dessert.

What did you think of the episode “Justice Society of America”?