This week on TNT’s Snowpiercer, Andre was not happy as he emerged from his drawer-induced fog, while a potentially calamitous crisis required Melanie’s hands-on attention.

After a night of hurling suspension drug-related goo, Andre was determined to mobilize and do something with the damning intel now in his noggin. Zarah urged him to recoup a bit more, and take things slow. When Josie showed up (still posing as Astrid), Zarah gave Andre a change of clothes before he and Josie sneaked off for a look-see by Dr. Pelton. Melanie meanwhile got word of a planned work stoppage in third, born of the remanded verdict in LJ Folger’s murder case, so she went to the Chains to cool some heads — by warning that if provoked, Mr. Wilford could easily swap a bunch of them for a bunch of tailies.

Dr. Pelton, a skeptical Andre comes to realize, is sympathetic to his cause/wrongful drawering — ever since she discovered that every 10th passenger has a mysterious “X” on their medical file. Suggesting that, under whatever unknown circumstances, there’s a drawer with their name on it. And yes, she makes clear, there are hundreds of drawers scattered across 11 or so cars. Not just the one.

Arguably ready to head out and about, Andre makes a beeline for the subtrain, to get the drop on Melanie before she helps Bennett and Boscovuc tend to a shorted-out brake thingy. Holding her at scalpel-point, Andre demands answers about the true nature of the 400 drawers. She dismisses his theory that they are some sort of extrajudicial punishment, by claiming that they are there to serve as a “lifeboat” for the train. That people in suspension are consuming fewer scarce resources. Plus, if the day comes, they can be pulled out to replenish the train’s ranks. 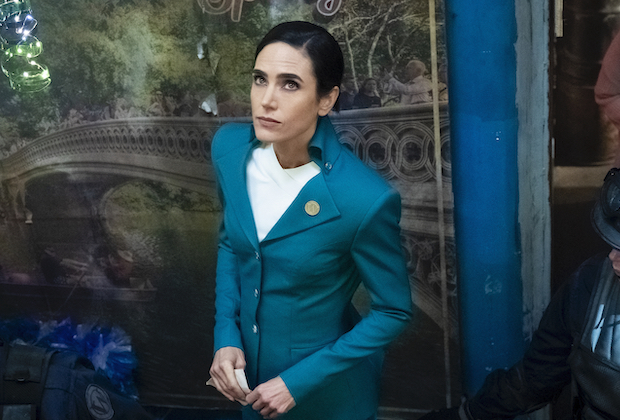 Before Andre can delve into any follow-ups, a mishap with the faulty brake causes the train to violently lurch forward — on a teetering, tottering course for likely tragedy. Melanie begs Andre to let her fix her train; he lets her go, and she puts on a thermal suit to climb into the subtrain’s crawlspace (as I have said before, it’s a very tall train!) and then dangle herself out a trap door, mere inches above the frigid, fast-passing tracks. She repeatedly attempts to grab for an uncoupled cable, before that section of the nearly off-track train arrives at one of the spindly canyon bridges. Suffice to say, Melanie corrects the connection just in time, and the train breathes a collective sigh of relief.

Andre and Josie, meanwhile, were invited to crash in Dr. Pelton’s cabin, while she bunks up elsewhere. Alone at last, they strip down and engage in a love scene that might have been sexier if you didn’t realize that Andre had been up all night sweating and yakking, and thus was probably pretty ripe at this point. Poor Dr. Pelton’s bed linens.

*Till tracked down Oz, who had his colleague over a bit of a barrel, seeing as she had KO’d him to help Layton escape the drawers. As such, he forced her to allow him some breachmen brutality in the course of suppressing the work stoppage. But after they bonded some during the near-calamitous brake malfunction, Till told Oz she won’t play his game anymore. She then finally showed up at Jinju’s place, with her belongings, ready to officially move in.

*That mother in the tail, who lost an arm…? Whose son had made a “trade” with Oz to secure some kronole? Yeah, she passed away.

*Speaking of mothers, Zarah is pregnant.

*After her run-in with Andre/fixing the train, Melanie summoned young, mathematically proficient Miles to her office. She gifted him with the engineer’s caliper that Mr. Wilford had once given her. In turn, she asked Andre’s ersatz ward for his help with something….

What did you think of Episode 6 of 10, “Trouble Comes Sideways”?