“This doesn’t suck,” you might have been moved to say when, early on in the Season 2 premiere of NOS4A2, we were given a glimpse of Vic’s life eight years after she put Charlie Manx in a coma by torching his supernatural Wraith. Not only were the vampire hunter and boo Lou shacked up and adorkably enamored of one another, they were happily coparenting her and the ill-fated Craig’s son, Wayne.

It seemed too good to be true, as impossibly delightful as a magical land where it’s Christmas every day. So, of course, by the time the episode was over, the show just had to torch our heroine’s fresh start and leave us grumbling, “Aw, that bites.” What sent Vic’s chill new normal up in flames? And how did ol’ Charlie — 143 at this point, I believe — get his groove back? Read on, and we’ll go over all of the key developments in “Bad Mother,” from new beginning to unhappy ending. 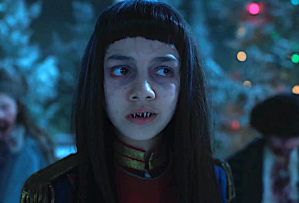 ‘THE BEAST HAS AWOKEN’ | As the hour got underway, we discovered along with Millie and Christmasland’s other toothsome residents that when living children visited Sleigh House, it switched on the lights in their grim fantasia. What’s more, the baby vamps could cross through a wall of static to the other side — to a degree. When one of Millie’s playmates gave chase to the terrified youngsters with pulses, he dissolved into static after but a few steps. Meanwhile, in Gunbarrel, Colo., Vic’s peace of mind was shattered when Wayne saw a news report that Charlie Manx had died in his hospital bed. “This is good news,” Lou told her since her shellshocked expression didn’t seem to have gotten the memo. “This is great news.” Borrowing her beau’s truck to clear her head, Vic downed a mini-bourbon and placed a call to Haverhill, where Maggie was blissfully cohabiting with FBI Agent Hutter. Would Maggie use her tiles to ask if Manx is really, most sincerely dead? Pass, said the retired Scrabble champ. She didn’t do that anymore. “This is your happy ending,” she added, “so try to see it.” Overwrought, Vic was thisclose to crashing the truck in hopes of turning it into a knife when she got a call about a new bike. “Hello there,” she told it. “Yeah, this is totally your new knife,” replied the flickering lights in the garage.

‘I DON’T WANT YOU TO DIE AN OLD MAID’ | Elsewhere, Bing approached an artist who was repurposing old Rolls Royces for an exhibition about purchasing the Wraith (which, to his horror, now had flowers planted where its engine had been). When the fellow said, in essence, “Sure, creepy stranger, you can buy it from the gallery for $150k,” Bing replied, as only a total psycho could — and in front of the guy’s young son to boot — “You sure you don’t wanna give me that Wraith?” (At that point, I would’ve probably s–t twice and died, so I’d have handed over the car, the kid, whatever he wanted.) Back in Gunbarrel, Lou tried to get excited about Vic’s fixer-upper of a new knife. “It’ll be our Millennium Falcon,” he said. “We’ll be like Han and Leia — no, Rey and Finn!” But even he couldn’t fake it anymore when she revealed that she intended to use the Triumph to find Manx. He’d kind of hoped that, without the threat that Charlie posed hanging over them, they could make it official, both between themselves and Wayne. Rather than pay more than lip service to the fanged elephant in the room, Vic basically agreed to marry Lou and form Team CarQueen. Or Team McCarmody. Or… they’d figure it out later. 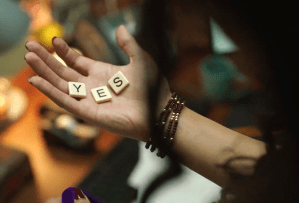 ‘DAD SAYS THAT THING REMINDS HIM OF A SEWING MACHINE’ | In Haverhill, Maggie dialed 911 to report that something had happened to the cute purple-haired librarian — you know, her. She was going to use the tiles! When she did, asking whether the Wraith was dead, the answer she received was a definitive yes… which sent her straight to the floor with a thump and a seizure. In Gunbarrel, Vic started to receive signs, terrible signs — Christmas music on the radio, phone calls that turned the receiver to ice… that kinda thing. And she’d become so fixated on sharpening her knife, so to speak, that she’d forgotten to pick up Wayne from school. He was hurt; Lou, arguably more so. “I guess,” he said, “I hoped that Wayne and I would be enough.” The following morning, Vic committed herself to proving that her loved ones were indeed enough. She gave Lou a sexy wake-up apology, then told Wayne that they were playing the sort of hooky that involved having ice cream for breakfast. Alas, one phone after another started ringing, prompting Vic to cut wires, throw receivers in the oven, anything she could think of to make them stop.

‘TELL FATHER CHRISTMAS I’M COMING FOR HIM’ | After terrifying Wayne by busting into his room to take away even a toy phone, Vic finally answered the call. Argh — mistake. It was Millie, pissed about the state of Christmasland and full of threats. Mind you, Vic was pissed, too, and by then, full of mini-bourbons. “Never come here,” she warned Millie, “or I’ll light you up, too,” just like the Wraith! Totally tizzy-fied, Vic took her now-functional knife through the Shorter Way to the morgue. There, she listened closely — crazy-closely if you ask me! — to ascertain whether, despite Manx’s body having been autopsied, he was still breathing. He was not. Still, she stuck a scalpel in his heart. (Clearly, she’d seen a horror movie or two. Never assume a dead villain is dead enough.) When Vic returned home, she found… oh, crap. She found her home burning. Yeah, that’ll happen when you throw things in the oven that don’t belong in the oven, then zoom away on a joyless ride.

‘YOU’RE DUMB AS A BOX OF HAIR’ | That night, after Vic tucked in Wayne in a hotel bed, she apologized to Lou. “For what?” he asked. “What exactly are you apologizing for?” Was it for BS’ing him when he tried to get real with her? For lying about what she’d been going through? For always having one foot out the door? Maggie had once said that gifts came at a price, Vic replied. Her own gift… “it has taken me apart in ways that I don’t understand… and don’t think can be put back together.” She just needed to get help, he argued. And to quit drinking. Sadly, instead of do either of those things, Vic loaded her pockets with booze from the hotel mini-fridge and… Well, she was about to leave when Wayne caught her. “Is it because of Manx?” he asked. “No, it’s because of me,” she responded; he was safer with Lou. Well, “don’t forget your jacket,” the boy suggested. “Dad says it’s got armor to protect you.” And she was sure gonna need it, as her next stop was the Shorter Way to the lake… and, ultimately, you-know-who.

But wait, if Manx was dead, like stabbed-in-the-heart-and-dissected dead, how dangerous could he be? Extremely, it turned out. As soon as Bing forced the artist to help him replace the Wraith’s engine, Charlie’s ticker started ticking anew — even with a scalping stuck in it. With that, the lights came back on in Christmasland. Daddy, Millie could sense, was coming home. So, what did you think of “Bad Mother”? Grade the Season 2 premiere of NOS4A2 in the poll below, then hit the comments with your reviews.