The Hulu rom-com — which dropped its entire first season earlier this week — wrapped with another Creekwood High soiree, this one with significantly more teen angst than the season-opening winter carnival. Before you give us your thoughts on the finale, let’s recap the events of “Spring Fling”:

I’M IN THE CORNER, WATCHING YOU KISS HIM | Upon getting to school, Victor informs Felix that he couldn’t come out to Mia the previous night, given her unexpected family drama; instead, he wants to give her a perfect night at the Spring Fling dance, and then he’ll tell her his big secret. In the meantime, that note to “B” that Victor’s sister found the night before? Victor slips it into Benji’s locker, hoping for the best. (Raise your hand if, like me, you were convinced Victor put his note in the wrong locker, inevitably cueing up a big ol’ misunderstanding in the Creekwood halls.)

That night at the dance, Benji confronts Victor in the men’s room — and though he forgives Victor for kissing him, he says they need to keep their distance regardless. “I have a boyfriend and you kissed me,” Benji maintains. “I need to stay away from you.” But Benji’s harsh words aren’t the most shocking part of this scene: It’s the big reveal that Andrew was in one of those bathroom stalls the whole time, and judging by the look he gives Victor as he washes his hands, he heard everything.

That’s when the you-know-what starts to hit the Spring Fling fan: Andrew says he has no plans to blab Victor’s secret, but he’s not here for how Victor is treating Mia. Pilar, meanwhile, remains convinced that Victor is cheating on Mia with a girl, and Felix accidentally reveals that the “B” from Victor’s note is someone Victor works with at the coffee shop. Pilar then interrogates Benji, asking him if Victor has ever taken a work trip with a female coworker — and Benji’s boyfriend, Derek, seems to connect the dots on his own about what happened in Willacoochee.

Later, Victor intercepts Benji and Derek, revealing that he was the one to kiss Benji unprompted, while Benji did everything right by stopping the kiss and transferring coffee shops afterward. Victor gives Benji a slew of compliments — right in front of Derek, which might not be the best idea he’s ever had — and promises to stay out of their way for the foreseeable future. 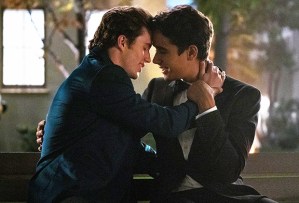 But despite Victor’s best efforts to keep Benji and Derek together, Benji approaches Victor a few scenes later and reveals they’ve broken up… because Benji ended things with Derek. He realized that Derek often made him feel badly about himself, and he wants to be with someone who doesn’t make him feel anxious all the time. For him, that person is Victor. “That’s how you make me feel, too,” Victor nervously responds — and they kiss.

Of course, Benji’s a bit hesitant to get involved with Victor so quickly: “I’ve been out for a while now, and you — have you even said the words out loud yet? ‘I’m gay’?” Benji asks Victor, who is adamant that he will say them. He’s ready now, and he’ll tell Mia the truth tomorrow, after the dance is behind them. Benji chooses to believe him, and they kiss once again… but this time, Mia catches them mid-makeout, watching them in shock before tearfully heading back to the gym.

After Benji heads home, Victor chases down Mia and Andrew when he sees them leaving together, at which point Mia reveals what she saw, asking if her relationship with Victor was ever real in the first place. He insists that it was (“You’re, like, my favorite person,” he tells her), but Mia doesn’t seem to buy it and walks out of the school.

Victor and Pilar bail on the dance, too, with Pilar still convinced Victor’s been cheating. Though Victor does admit to his sister that he’s been going through something for the past few months, he doesn’t want to give details until they get home — and on the way back to their apartment, Victor receives a well-timed message from Simon, who reminds Victor that he can’t control how others will respond to the news that he’s gay. He can only control when he tells people his truth, and those words seem to inspire Victor to reveal his sexuality to his family when he gets home.

Naturally, when he and Pilar do get home, their parents have some news of their own to reveal first: Given their recent marital problems, they’re separating for a while, to determine once and for all if they still make sense as a couple. It seems at first like Victor might use this announcement as a reason to postpone his coming out for another day; he even replies, “Nothing” when his mom asks what he wanted to talk about upon getting home from the dance.

Then, in the episode’s final seconds, Victor has a change of heart, turning back toward his family instead of going to bed. “No. Not nothing,” he says, determined. “Mom, Dad… I’m gay.” Roll credits! 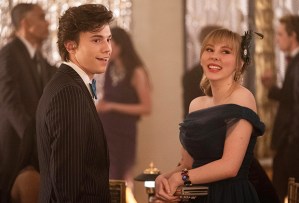 * After ending things with Lake in Episode 9, Felix attends Spring Fling with a girl named Wendy, who’s just as adorably eccentric as Felix. Lake, meanwhile, goes with some popular dolt named Kieran. But Lake is clearly jealous of Felix’s bond with Wendy, while Felix can’t stop staring at Lake when he thinks no one is watching.

Later, just as the Victor-Benji-Mia triangle is reaching its awkward crescendo, Victor and Mia are named Spring Fling King and Queen, and neither of them takes the stage to accept the honor. Lake decides to get up there and accept on Mia’s behalf… and she invites Felix to join her as Victor’s understudy.

“He told me he just wants me to be happy, and the truth is, that little nerd makes me happy,” Lake announces to the entire school. “Talking to him makes me happy. Kissing him makes me happy. Making him happy makes me happy.” And though she’s well aware that any videos of her dancing with Felix could go viral and follow her all through college, it’s a risk she’s willing to take — and Felix does join her on stage, where they immediately kiss and make up. (Emphasis on the kiss. They carry on for a while considering everyone is watching.)

* Before Mia heads to the dance, Veronica offers to let Mia borrow some of her jewelry for the occasion. Mia knows that her dad’s fiancée is trying to forge a bond with her, but she tells Veronica they just don’t have that kind of mother-daughter relationship yet, then cuts Veronica off when she tries to suggest they could have a strong bond someday.

There does seem to be hope for Mia and Veronica’s relationship, though: It isn’t under the best circumstances, but when Mia returns home from the disastrous dance, she immediately accepts a hug from Veronica, breaking down in tears as she does.

* As for Andrew and Mia, the finale leaves them in an uncertain place. Andrew walks her home after the dance, and Mia invites him inside when they arrive — but he declines. “I don’t really want to be your rebound. I want to be your… you know,” he admits, before kissing Mia on the cheek and walking away.

Now it’s your turn! What did you think of Love, Victor’s finale? Cast your votes in our polls below, then drop a comment with your reactions.