Much like the film that inspired it, the series premiere of Hulu’s Love, Victor ends with a life-changing ride on the ferris wheel. But Simon Spier’s visit to the Creekwood High winter carnival had been triumphant and fulfilling… while Victor Salazar’s is quite the opposite.

Love, Victor is the small-screen follow-up to the 2018 rom-com Love, Simon, which starred Nick Robinson as a gay high schooler whose sexuality was unexpectedly revealed to the entire Creekwood community. Two years after the events of the film, we’re introduced to Victor (played by Michael Cimino, Annabelle Comes Home), a new Creekwood student who just moved to Atlanta with his family, bringing plenty of emotional baggage along with those packed cardboard boxes.

When we first meet Victor in Wednesday’s series premiere, he’s actually writing an Instagram DM to Simon — and it’s not exactly friendly. “I just want to say: Screw you,” Victor types. “Screw you for having the world’s most perfect, accepting parents. The world’s most supportive friends. Because for some of us, it’s not that easy.”

The episode then jumps back 24 hours, when Victor and his family — mom Isabel, dad Armando, younger sister Pilar and little brother Adrian — first arrived in Atlanta. (They apparently relocated because Armando got a new job, but Victor later catches his parents arguing in the kitchen, suggesting there’s more to the story of their move.) Victor explains that life back in Texas wasn’t so bad, but it was frowned upon to be different: A classmate of his was once mocked for eating a salad at lunch instead of ribs, while Victor’s dad — not unlike Simon’s father in the movie — liked to crack jokes about people in their church congregation who might be gay.

Since Victor is still figuring out his own sexuality, he’s excited to be in a more tolerant city these days, and he’s thrilled to learn that the Creekwood High students applauded Simon (quite literally!) for coming out so publicly two years ago. Unfortunately, when two of Victor’s new classmates — Lake (The Real O’Neals’ Bebe Wood) and Mia (This Is Us’ Rachel Hilson) — ask if he has a girlfriend back in Texas, he blows his chance to admit he’s still figuring out who he really is. Instead, he simply says no, there isn’t a girl back in Texas… and Mia looks delighted by that news, which does not go unnoticed by Victor’s well-meaning but eccentric new friend, Felix. 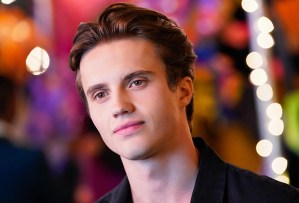 “Dude! You just made Mia Brooks blush!” Felix announces, though the significance of that statement is completely lost on Victor. Meanwhile, Victor gets completely distracted a few moments later by the arrival of Benji, a good-looking — and gay, it turns out — Creekwood student who strikes up a nice rapport with Victor right away. (Victor’s interest in Benji is so immediate and intense, he actually sees Benji walking in slow motion when he first strolls through the Creekwood doors, which we know is pop culture shorthand for A Very Big Crush.)

Elsewhere in Victor’s first day of school, he’s quickly recruited to the varsity basketball team after showing off impressive skills in gym class. But he blanches when he learns that joining the team costs $500, and his jerk of a classmate, Andrew — a popular jock, in case you hadn’t guessed — rudely starts a GoFundMe to “help” Victor get the basketball cash. Victor confronts Andrew about the fundraiser later that day, which ends with an embarrassed Victor getting his lunch dumped on the ground. Even worse, when Benji offers a hand to help Victor up, some nearby bully cat-calls, and a post on the Creek Secrets website that evening labels Victor as the new kid with a “short fuse.”

That’s when Victor decides to write Simon a DM, unloading about his miserable first day at Creekwood High. “I just need you to know that you’re very lucky, Simon,” Victor concludes, before opting to go to the winter carnival with Felix that night.

While they’re at the fair, Victor gets a reply from Simon, who is sorry to hear that Victor feels he can’t open up to anyone else in his life — though he suspects that Victor’s family will be able to work through Victor’s troubles just like Simon’s family did with his. “You deserve a great love story, too,” Simon tells Victor. “I’m here if you need me.”

And though Victor seems tempted to ride the ferris wheel with Benji after reading Simon’s note, he ultimately decides against it and invites Mia to ride with him instead. (But honestly, neither of them are as excited to go on the ride as Felix and Lake are to watch them go on the ride.)

“Maybe you’re right. Maybe I do deserve a great love story,” Victor tells Simon in a voiceover reply as he and Mia take their seats on the ferris wheel. “But I’m not sure what that looks like for me. Because my story is nothing like yours.”

OK, your turn. What did you think of Love, Victor’s premiere? Grade the first episode in our poll below, then drop a comment with your full reviews!