This week on Marvel’s Agents of S.H.I.E.L.D., Coulson did his best to keep the timeline intact — even if it meant allowing a hero to fall. Plus, when is the team heading next?

Picking up where last week left off, Coulson (just a bit on the fritz, now seeing things in a black-and-white, film noir style) was questioned by Sousa, primarily about the molten mess that was left after his scuffle with a Chronicom. Recalling a bit of S.H.I.E.L.D. history, Coulson realized that on this day, Sousa would die after delivering some tech to Howard Stark. So he played along, convincing Sousa that he was fully briefed on and involved with his top-secret mission. They then boarded a train for Los Angeles, where they were to meet Coulson’s contact and claim the package.

Thing is, said tech was to be handed off by the scientist whose face the ill-fated Chronicom stole, so Yo-Yo and Deke headed to that man’s house to find his faceless corpse and hopefully also find the tech. But while they were there, some toughs showed up and KO’d/abducted Deke, with powerless Yo-Yo unable to catch up to them in time.

Empty-handed, Coulson did his best to stall with Sousa aboard the train, but at one point he had to pretend to spot his “contact” and then deftly take the sleeping stranger’s briefcase. When Coulson declined to reveal its contents (abiding by Stark’s orders), Sousa huffed and went for a drink in the bar car. While the gents were separated, the lead Chronicop from the season premiere confronted Coulson, advising him to let Earth be seized in exchange for humankind being shown some considerations. A pretty lady meanwhile tried (but failed) to distract Sousa from the fact that the bar car was being quietly cleared by goons, ahead of an ambush.

Said brawl thus commenced, and while Sousa impressively pretty much held his own, he got an assist from not just Coulson but also Daisy and Mack, who had arrived via Quinjet to deliver the actual tech — a rhomboid-shaped slab of metal, no bigger than a breadbox — which Yo-Yo had found at the erased scientist’s home. Afterward, Sousa was brought on board the Zephyr, where he of course had more questions than ever. Coulson meanwhile explained to Mack how Sousa’s sacrifice was necessary, inspiring as it would be to other agents; cue nice Coulson/Avengers death comparison.)And while the team had other plans for Sousa, upon landing in L.A. he opted to escape via motorcycle, to complete his mission. He delivered the tech to his man at the Roosevelt Hotel, after which he was, as history foretold, shot. He then stumbled into the hotel pool, to die….

But, we realized, Mack had made the executive decision to save Sousa. So Coulson had traded places with Sousa at the hotel (after tranq-ing him), grabbed his coat and cane, and then let himself get shot in the back by Malick’s gunman, tumbling into and floating in the pool until Jemma and Daisy, posing as stooges for the coroner, fished him out. As Coulson later explained to Sousa aboard the Zephyr, the timeline would remain intact — the world (Peggy Carter presumably included) thought Sousa died that night at the hotel — while he in fact had been “taken out” of history, and now was accompanying the team on their next time jump… to the groovy 1970s? 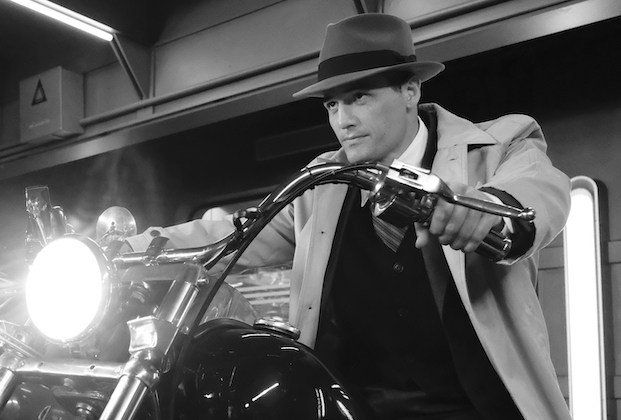 So, is Sousa now a de facto member of the team? “I wouldn’t get my hopes up too much,” his portrayer, Enver Gjokaj, told TVLine. “But he’s on the ride for the time being.”

As for when they have just landed, “It was fun for me as an actor to play Daniel in that time period, reacting to that time period,” Gjokaj teased. “That was a blast for that particular episode.”

In the immediate aftermath of this week’s episode, Gjokaj said that Sousa is “very conflicted about being taken out of time, as you can imagine, because of all of the things that he had to love for in that time period. That might, though, give us some clarity on what’s happening with him in the MCU universe [and] what ultimately happened between Peggy and Daniel.”

* The goons who grabbed Deke were not Russkies but working for Wilfred “Don’t Call Me Freddy Anymore” Malick, who at first didn’t recognize the guy he met at the speakeasy 24 years prior. Once Deke divulged their connection, Malick spared his life and let him go. Later, Malick was approached by the lead Chronicom, who promised HYDRA success — if Wilfred did everything he was about to be told….

* After a couple more odd encounters, Jemma and Yo-Yo divined that ever since May briefly crossed over into that alien world at the temple, she now is feeling the emotions of people she makes physical contact with. (But otherwise, she feels nothing, such as when LMD Coulson came fully back online and he saw her approach him in living color.)

* Enoch in 1955 is still tending bar, at the Hawaiian-themed Crazy Canoe, where he longs to be summoned back to the team… but instead settles for transferring landline calls to the Zephyr (when not listening to a sad sack detail his workplace woes).

* Tired of being the “Agents of Status Quo,” Yo-Yo and Deke agree that “first chance” they get to make any change to discrimination, they will.

What did you think of the episode “Out of the Past”?