This recap, by the very definition of the word “recap,” contains spoilers from Episode 5 of DC’s Stargirl (which premieres new episodes Monday on DC Universe and Tuesday on The CW).

DC’s Stargirl this week added not one but two new members to her team — but is one of the recruits doing it for the wrong reasons?

Episode 5 opened with a flashback to nine years ago (following the JSA’s deadly face-off with the ISA, we shall presume), where Rex Tyler aka Hourman is racing to get himself and wife Wendy far away from Blue Valley. They leave their young son behind, with Wendy’s dick of a brother, Matt, asking him to mind their home and pose as the father of “Rick Harris” (whom the ISA doesn’t know exists). Alas, Rex and Wendy did not get very far, when just down the road their car is swatted into a tree by Solomon Grundy. Fast-forward to the present, and Rick is now a brooding teen intent on restoring a yellow ’66 Mustang — if only Uncle Matt would stop hawking the parts he needs. 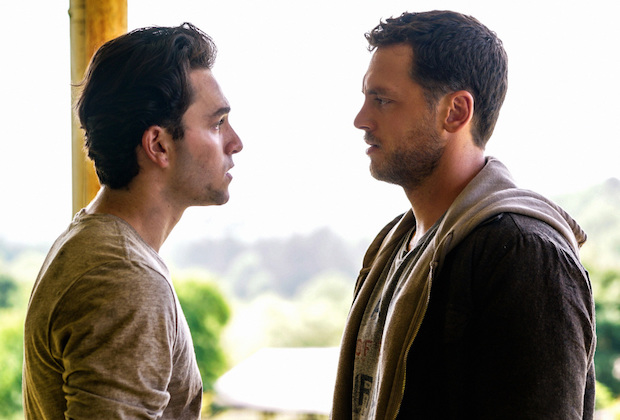 Courtney meanwhile decides to lug to school her massive duffel stuffed with the green lantern, hourglass etc; seeing as Barbara nearly found her superheroic stash. But first, she tells Pat about the strange visitor to Brainwave’s hospital room: Principal Bowin, playing a violin. Pat scoffs at the prospect that she is The Fiddler, seeing as he in the past was an Irish male, though maybe she is the Virtuoso? Pat in turn shares his theory that councilman Zarick was the Wizard.

At school, Beth follows/eavesdrops on Courtney and Yolanda, having spied them the night before in their superhero garb. After school, Pat’s car conks out in the course of driving Courtney home. Rick “Harris” passes by, and helps diagnose/fix the car — making Pat curious along the way by referring to his father’s yellow ’66 Mustang. Court meanwhile notices that the hourglass in her duffel hums and glows when Rick is nearby, so she sets out to not-so-stealthily follow him down the road. Confronted, she tries to explain the hourglass thing, but it fails to react as needed, making Rick think her a loon.

Courtney arrives home to find 1) Beth in her room 2) wearing Dr. Mid-Nite’s goggles, which had fallen out of the duffel that morning and were getting chewed on by the dog. Beth details how the high-tech goggles are like “Wikipedia on rocket fuel,” offering real-time analysis and backstory on whatever they see. Court swears Beth to secrecy, even from her BFF parents (lest they land in harm’s way). When “Chuck” (the goggles, voiced by E.T.’s Henry Thomas) reveals that Rick Harris is really Rick Tyler, as in Hourman’s son, Court realizes his connection to the hourglass. Using “Chuck” to track Rick, Court and Beth meet up with Yolanda and find themselves outside mean girl Cindy’s Halloween house party. Seeing that Henry is inside, Yolanda hangs behind while Courtney and Beth slip into the party. (When Henry soon bails on the party, however, his brain “hears” Yolanda think him a “jerk”!) Once Court finds Rick, the girls get together and try to prove his hourglass bond. Beth explains that wearing it and turning it upside-down will give him one hour of superstrength per day, so he does just that and realizes the truth upon crushing a keg like a regular beer can. Rick, though, has zero interesting in “suiting up” — and dares the girls to try and stop him as he skulks away. (Yolanda thus congratulates Courtney on turning “the school’s biggest delinquent into an unstoppable beast.”) On his way through downtown, Rick spies Uncle Matt’s truck and snaps it on half with one punch, heh.

Ditching Beth, Stargirl and Wildcat catch up to Rick at the tree where his parents died. He explains his long-brewing resentment over their deaths, saying, “I want to hit something, anything, all of the time,” and he is tired of feeling that way. Court says she can relate, feeling cheated out of time with her own superhero dad. Rick isn’t interested in keeping Hourman’s own legacy alive — until Beth arrives and reports, via “Chuck,” that Rex and Wendy’s death was not an accident caused by a blown tire. The goggles project a hologram that recreates the crash, and Solomon Grundy’s role in it. Rick then agrees to join Stargirl’s team, though not to seek justice but “revenge.”

Episode 5 closes with a sequence that toggles between the Gambler and Virtuoso intercepting the shipment of a satellite somethingoranother (using the violin to put one driver into a trance, while the Gambler shoots dead the other)… and Pat piecing together who Rick “Harris” might be. Stopping by Courtney’s room, Pat spies a pulsing green light from her closet/duffel, and realizes that she has been holding onto several JSA artifacts.

How will Pat react to seeing what his stepdaughter has been up to behind his back? “It’s not good,” co-showrunner Geoff Johns told TVLine with a laugh. “He’s obviously concerned, and he is going to confront Courtney right away. He has a very strong opinion about what she should be doing and what the kids need to do. He is not going to be pro ‘New JSA.'”

What did you think of the episode “Hourman and Dr. Mid-Nite”?