A dark, gritty reboot of the golden oldie Perry Mason? At first, it sounds like a joke, or like a Jack Donaghy idea from 30 Rock. The classic legal drama debuted way back in 1957, which leaves quite a thick layer of dust to brush away, but HBO’s reboot — premiering this Sunday at 9/8c; I’ve seen the first six episodes — somehow feels vitally current, with richly drawn characters, gorgeous visuals, a genuinely compelling central mystery and another terrific lead performance from star Matthew Rhys.

With Rhys stepping into the title role originally played by Raymond Burr, the prequel finds the future lawyer as a grumpy, booze-soaked private eye in 1930s Los Angeles. Slumped in a mustard-stained tie, this Perry Mason is morally ambivalent, psychologically haunted and cynical to a fault. (“Everybody’s got an angle, everybody’s hiding something and everybody’s guilty,” he grumbles at one point.) Rhys employs the same hangdog scowl here that he had as conflicted Soviet spy Philip Jennings on The Americans, and that melancholy, world-weary demeanor sets the tone for the entire series. Casting Rhys as Mason was a masterstroke; he makes the whole thing work. 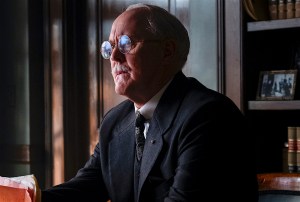 Perry Mason‘s season-long mystery centers on a chilling image: a dead baby boy with his eyes stitched open, the victim of a kidnapping goes horribly wrong. Mason is tasked with finding out who killed the boy and why, and the trail of clues leads him deep into the City of Angels’ sleazy underbelly, which is crawling with dirty cops, cheating wives and grandstanding lawyers. The story serves up lots of intriguing plot threads to sort through… and more than a few gruesome visuals along the way, too, including a corpse whose head is mostly blown to bits by a shotgun blast.

The noir-flavored murder mystery that follows fuses together the dark, twisty procedural elements of True Detective and The Night Of with the retro prestige drama of Boardwalk Empire and The Knick. The jazz score is moody and mournful, and the visual palette leaves everyone drenched in dramatic shadows, even on a sunny L.A. day. A palpable sadness hangs over every scene: The country is deep in the throes of the Great Depression, and we can see the desperate hunger lurking in people’s eyes. 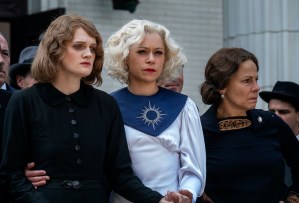 Rhys is backed up by an almost embarrassingly stacked cast: John Lithgow as Mason’s attorney mentor E.B. Jonathan, Tatiana Maslany as fiery church preacher Sister Alice, GLOW‘s Gayle Rankin as the dead boy’s catatonic mother… by the time Stephen Root walked in as an arrogant D.A., I laughed out loud at the sheer audacity of assembling a cast this good. (I’d happily watch a spinoff of Lithgow and Root’s characters verbally sparring over a fresh case each week.) There are familiar faces from the original series as well, with Juliet Rylance as Mason’s future secretary Della Street, who is now E.B.’s receptionist, and Gotham‘s Chris Chalk as future investigator Paul Drake, now a Black beat cop with a knack for detective work.

I do feel I should offer a warning: This is a heavy, intense watch. It does contain a vein of dark humor, mostly thanks to Shea Whigham (who’s never been better) as sleazy investigator Pete Strickland, but it’s not exactly lighthearted escapism. It is impeccably crafted and surprisingly involving, though, balancing out the crime elements by delving deep into Mason’s troubled psyche. And for die-hard fans, it does eventually evolve into the courtroom drama we expect from the brand. It almost plays like a superhero’s origin story, with Mason showing hints of the crusading defense lawyer he’d turn out to be. I’m not in any hurry to jump ahead to Mason’s glory days, though. His early years are pretty great, too, as it turns out.

THE TVLINE BOTTOM LINE: HBO’s Perry Mason reboot is a fresh take on the famed TV lawyer, with a juicy mystery and a ridiculously good cast.