This week on TNT’s Snowpiercer, the thirdies lobbied to have a say in LJ Folger’s trial, though an unforeseen twist threatened to derail justice. Meanwhile, Josie sneaked up-train again, unprepared for what she would find.

With LJ about to be tried for the murder of not one but two third-class passengers, Miss Audrey of the Night Car whipped out a binder of bylaws and argued to Melanie that there could and should be one passenger from all three classes on the tribunal — especially given the origin of the victims. (“Third touches every system on train,” Audrey reminded. “We will be heard.”) Mela– er, Mr. Wilford eventually concurred, and a new tribunal was announced: Edith from first, school teacher Mary Elizabeth from second, and paper maker William from third.

That decision did not play well up-train. Ruth warned Melanie that rules cannot simply be changed, while Lilah Folger worried that the inclusion of third represented an “idea” traveling up train that, in order to spark to life, would wrap its fingers around her daughter’s throat. In fact, Lilah and other firsties covertly met with Commander Grey to suggest that the train’s day-to-day operations and all matters of the tail would better be handled by them, instead of Melanie. Martin Covin reported back to Melanie these murmurs of sedition, in trade for her fast-tracking some renovations he needs. 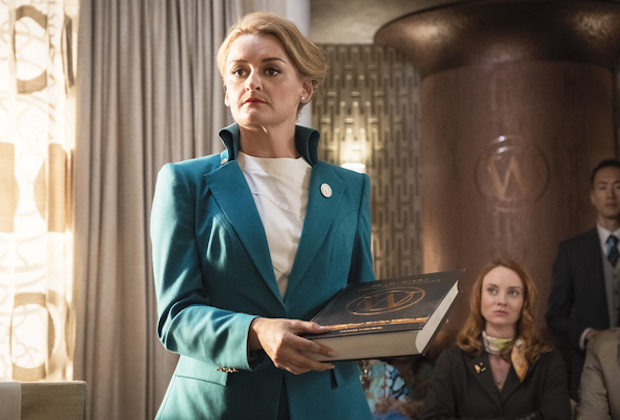 As the trial got underway, the severed/saved penises (peni?) and the J-hook were presented as evidence, while Roche, Dr. Pelton, Jinju and Miss Audrey all testified. “You need to care about the lives in third,” said the Night Car boss. Mr. Wilford may have launched the train with an effective enough “iron order,” but 19 revolutions/seven years later, “We need to save our souls,” she asserted. “Justice for Nikki!”

LJ then testified, discussing her (presumed) love for Eric and how had had a “power” over her. She related how Eric once said that “fear makes people honest,” as a segue into what we learned would be her big play: “Sean Wise said he was an informant, a spy, for Wilford,” she told all, as Melanie and other jaws dropped.

Sean Wise warned that “shadows and lies were taking over our train from head to tail,” LJ added, alluding to a precise “400 secrets” — as in, Melanie and Jinju both quietly realized, the drawers. “If the train shows me mercy,” LJ pleaded to a listening Wilford, and with almost a wink to Melanie, “I promise to do my part for her.”

The tribunal ruled unanimously that LJ was guilty on both counts of murder. But then an urgent message came in from Mr. Wilford (as set in motion by a message Melanie sent to engineer/booty call Bennett), saying that in light of the accused’s young age, her sentence had been commuted and she was remanded to her parents’ custody. That twist was met with as many boos from the third-class delegation as hurrahs they cheered after the initial verdict.

Melane pulled a smug LJ aside to “stress the importance of discretion,” while also asking, “What did Sean tell you exactly…?” “That’s between me and Wilford isn’t it?,” LJ countered, before affirming, “He looked out for me, and I will look out for him.”

So what all is the “secret” of the drawers? As reiterated by Dr. Klimpt this episode, we know that the process for pulling someone out of their slumber has by no means been perfected, and at the very least must be done more slowly. And those kinks do need to be worked out, Melanie noted, seeing as one day all 400 drawers may need to be filled, and they’ll in turn have to make room. But Melanie and Jinju also worried that Sean Wise had learned/told Eric of a “list”…?

Well, Josie herself got a look at the drawers this week, after trading places with Astrid and meeting up with Terence. He and fellow janitor Annie sneaked Josie and themselves into the drawers area, while Klimpt was at the trial. Terence and Annie quickly stole some goods before leaving Josie to fend for herself. She scrambled to locate Andre’s drawer, discovering along the way at least two younger (child?) passengers she was shocked to see there. Finally she found Andre, and then tried to hide inside his drawer when breachmen Till and Oz suspected a break-in. Upon finding Josie with Andre in the drawer, Till was astonished to see the detective had not been sent back to the tail. Oz meanwhile began whaling on Josie, until Till KO’d him. Till then led Josie and a doddering Andre to Zarah’s place in the Chains, where Josie trusted Andre’s ex with his life while she raced to trade places back with Astrid.

In Zarah’s care, and having been injected by Josie with something from the med bay, Andre uncontrollably thrashed while continuing to have memories of the past, as we glimpsed earlier in the episode. Eventually the memories zeroed in on the tail’s cannibalistic “kill cult” from years prior, and how Andre was chosen to deal with it. Upon doing so, exactly as Andre told Melanie and Roche in an earlier episode, he returned with the cult leader’s heart, which he, Josie and others cut up and symbolically ate.

“Never again,” Andre said to the others back then, as he started to calm down in the present, in Zarah’s arms.

What did you think of the episode “Justice Never Boarded”?