An AWOL familiar — and one very hot ticket — threatened to be the vampire roommates’ undoing in What We Do in the Shadows‘ Season 2 finale.

Having just saved his master’s proverbial bacon at the coven, Guillermo turned up missing this week, leaving Nandor to open/climb out of his own coffin, before finding his familiar’s stripped bed with a simple “SORRY” note on it. 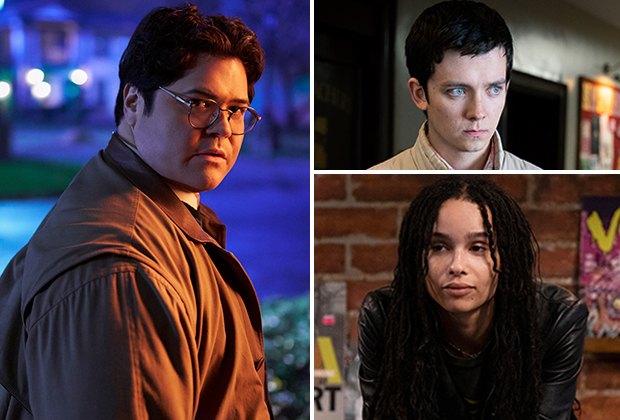 Within but a week without “Gizmo,” the house is a mess, with drained bodies strewn here and there, and blood puddles making for safety hazards. Worst of all, no one has been handling the laundry, so Nandor, for one, is left to loll around in a basketball jersey. Desperate, the roomies decide to try to track down Guillermo, but no one 1) has his phone number or 2) even knows his full name!

The sordid predicament is set aside when a delivery man brings great tidings in the form of a coveted invite to the Noeuve Théâtre Des Vampires, a highly exclusive, vampires-only event that comes around but once every five years. (Among other things, Laszlo says the revue promises not just “full boobies” and “full boners” but “genitalia that makes a human go, ‘What is that exactly?'”) Alas, the roomies have nothing to wear to this gala, so Colin Robinson agrees to fetch their dry cleaning, a chore that he hypes up to be somewhat life threatening so as to not get saddled with the gig on a standing basis. In trade, all he asks is to be moved out of his room in the basement… to a different room in the basement.

Guillermo, we realize, has moved back home with his mother, torn as he is between his aptitude/seeming destiny as a slayer and his want to be a vampire. When Mom’s fridge goes on the fritz, Guillermo heads back to the house in Staten Island to grab his mini-fridge, expecting all kinds of awkwardness upon seeing Nandor & Co. Instead, with everyone off to the Théâtre Des Vampires, he finds the house empty. He does spy the invite, however, and upon close inspection realizes it was printed by the vampire council that last season sought to punish Nandor for the baron’s death.

Meaning, in the words of Admiral Ackbar: It’s a trap!

As Guillermo races to the theater, Colin Robinson and the others take their seats, marveling at all the “heavy hitters” that are on hand (even from the energy vampire circuit). A masked emcee comes out and welcomes the night’s guests of honor – Nandor, Laszlo, Nadja and Colin Robinson, who are promptly tied up in their seats! They are then forced to watch actors portray them on-stage and recreate the times when they “killed their own kind,” starting with the baron and including the family that Guillermo and his slayer pals took care of earlier in the season. The emcee, revealed to be Vlad (Jemaine Clement), then makes clear the plan to punish the foursome via public decapitation. But first, an In Memoriam video montage of all the vampires we lost this year….

Led onto the stage and seated for their decapitation — and while, unbeknownst to anyone, Guillermo hides in the rafters, having killed many a guard and usher — Nandor reveals that it was their familiar, Guillermo… something… who slayed all those vampires. Nandor claims that upon learning of Guillermo’s treachery, he killed his familiar with his own bare hands. The emcee shrugs off the age-old “Blame the familiar!” excuse and readies the guillotine thing, when Guillermo swings down on stage and begins slaying absolutely everyone. And I do mean every vampire in the theater, save for the roomies, using a variety of means, including even spritzes of holy water.

Once the mind-blowing, John Wickian mass dusting is done, the super-slayer declares, “My name is Guillermo de la Cruz” — to which Nandor shrugs, “We don’t care what the f–k your name is. We had to pick up our own laundry!”

What did you think of Shadows‘ finale, and how the household will move on from here?