Spoiler alert: This interview includes spoilers from the series finale of 13 Reasons Why. Read at your own risk.

Winston Williams spent the entire final season of 13 Reasons Why fighting to expose the truth about Bryce’s murder in the hopes of posthumously exonerating Monty of the crime. In the end, actor Deaken Bluman tells TVLine, “He didn’t get what he wanted, but he got what he needed.”

What Winston needed was closure, Bluman explains, which came via Alex’s confession in the series finale. (Click here for our full recap.) Clay and his friends spent the entire season lying to Winston, but in that moment, “somebody finally told Winston the truth. He appreciated that.” Bluman adds that he’s “not surprised” Winston agreed to stop pursuing the matter. In truth, “he wasn’t really going to the cops. He just wanted answers, and mentioning cops is scary to people.”

Prom also afforded Winston some closure, as he imagined how it might have felt for Monty to dance with him in front of their classmates, finally free to live his truth. “It was wonderful working with Timothy [Granaderos] in that scene,” Bluman says. “He’s such a talented actor. We’re actually from the same vicinity in Michigan, so that really grounded Winston and Monty from the beginning, us being able to relate to one another. It was a match made in Netflix, without them even knowing. And I got chills when I read [that prom scene] for the first time. I texted Timothy and said, ‘I’m so happy we get this.'” 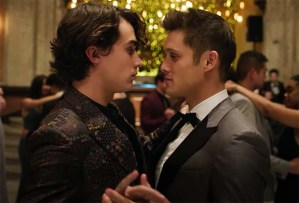 That said, Bluman wishes we’d gotten to see more of the behind-closed-doors moments that Winston and Monty shared. “In developing that relationship, I was always referring to flashbacks that the show never had,” he says. “Like, them jumping in the car and going to Palm Springs for the weekend, listening to great music and getting to know each other and really falling in love. People didn’t get to see that, but hopefully they felt that. It wasn’t just a one-night stand. They had a lot of love and a lot of fun together.”

Despite all of this closure, however, Winston’s ending was hardly a happy one. “What made me sad was that he ended up alone,” Bluman says, acknowledging that his character was left with unrequited feelings for Alex on top of his preexisting grief. “That’s the danger of searching for the truth. It’s not necessarily going to make you stronger. In fact, it’s probably going to break you a little.”

(As for whether Winston’s brief meet-cute with Ryan at graduation could someday lead to a relationship, Bluman isn’t ruling out any possibilities. At this point, we’ll settle for a hard “maybe.”)

How did you feel about the way Winston (and Winston and Monty’s) story ended? Drop a comment with your thoughts below.