This recap, by the very definition of the word “recap,” contains spoilers from Episode 4 of DC’s Stargirl (which premieres new episodes Mondays on DC Universe and Tuesday on The CW).

Stargirl this week began assembling a new Justice Society of America. Was her first recruit a purrfect fit?

“Wildcat” opened with a flashback to three months ago, where we discovered that Yolanda (now of the “Losers” lunch table) used to be quite popular at Blue Valley High, though not in an obnoxious/Mean Girl way. She was dating Henry King Jr., she was a favorite to win whatever student government position she was running for, her parents doted on her….

But then, one night, Henry texts Yolanda at home, asking her to “send me a pic… something sexy.” Yolanda is hesitant, but when Henry stresses “just 4 me” and that he loves her, she slips off her top and bra and snaps a topless selfie for her beau.

Backstory short, Cindy somehow got her hands on the sext and circulated it around to everyone just as Yolanda was giving an election day speech before the student body. Mortification, a rough break-up, and a grounding/hardcore estrangement by her parents followed.

Back in the present day, Courtney surveys the artifacts she gathered from the OG JSA HQ —  Doctor Mid-Nite’s goggles, Hourman’s hourglass, Wildcat’s cowl, Johnny Thunder’s “pen,” a lantern that is green. While keeping her stash a secret, she reaffirms to Pat that she wants to begin recruiting, but he is against dragging anyone else into this. Instead, his priority is finding the villains before they find them. That day at school, Courtney clashes with Cindy, who was bullying Yolanda. “You have no idea who you’re messing with,” the Mean Girl hissed. “Neither do you,” the secret Stargirl shot back. Yolanda, though, again rebuffed the new girl’s friendship, insisting she wants to be left alone.

Courtney finds Yolanda boxing in the school gym, and tries a different approach: “It’s not you who needs my help, it’s me who needs your help.” She invites Yolanda to her house for dinner that, night, saying she’ll explain everything then — alas, Yolanda is very grounded. The next day, Courtney works the Henry connection, revealing that she was the one who (accidentally) blew up the jock’s car. “The enemy of my enemy is my friend…?” Yolanda breaks down, explaining that Henry had been ‘so nice” and she thought they were getting serious. But now her whole life has changed. Her mortified parents won’t even bring her to church anymore.

Yolanda agrees to come over, and Courtney shows her the cosmic staff and shares a bit of her “destiny” as Starman’s (possible) daughter. Court invites Yolanda to try on the Wildcat outfit, and… it is nasty. Baggy, nondescript, and it smells like a gym locker. Yet when she puts on the (worse-smelling) cowl, the whole outfit magically transforms into a sleek, form-fitting catsuit. After checking Wiki to see what Wildcat’s powers were (e.g. dangerous claws, agility), the girls test them out around town. They then decide to follow Henry to his father/Brainwave’s hospital room, and get a peek at his visitor’s log — maybe ID other villains. At one point, Henry almost spots Yolanda behind him, but she leaps/clings to the ceiling above. After he leaves, she hides in a corner while Courtney hovers outside the window, as Principal Bowin slips in… and begins playing the violin for the patient, though to no anticipated effect. (“Is she a villain, too??” the duo wonder.) The girls then flee the hospital, but not without lunch acquaintance Beth, who was visiting her doctor mom, taking notice.

Back at Courtney’s, Yolanda brings the team-up to a halt, saying she doesn’t think she should be Wildcat — that she first needs to return to who she used to be, before she adopts any new persona. But when she goes home and makes an impassioned plea to her family to allow her to move forward with her life and be her old self, Mom holds firm, “You’ll never be. You disgraced your family, and yourself!” Sent to her room, Yolanda finds on her window sill the Wildcat costume with a note from Courtney: “I can’t do this alone!”  Moments later, Yolanda is suited back up and rapping at Courtney’s window. 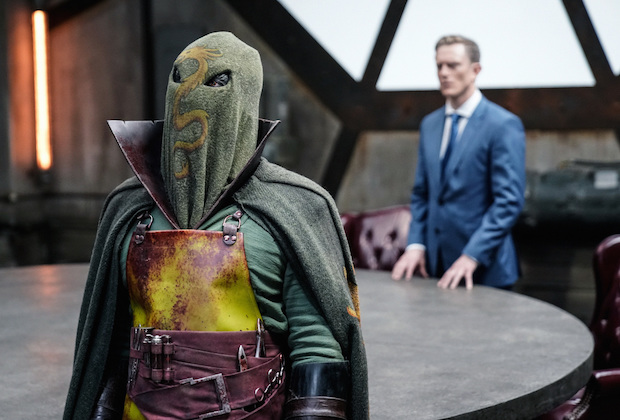 * Inside the ISA bunker, Dr. Ito (aka Dragon King) admitted to Jordan/Icicle that he never quite understood the need for a “team,” though now he believes in the ISA more than any of the others. What’s more, “I’ll never betray you,” he stressed. “Not like The Shade.” (Oh, the shade!) Dr. Ito reports, “I’ve been working on my daughter,” while Jordan expresses an interest in helping his colleague complete a machine he has been working on. Dr. Ito appreciates the offer, echoing his own support for Project New America, through which “one generation’s ultimate sacrifice will protect the next.” Dr. Ito notes, “I won’t fail you like the Wizard,” who was “vile” to the doc when he first came to town. He then asks if he may have the deceased ISA member’s body. And Jordan agrees. Which is polite.

* Denise, the widow of William Zarick aka The Wizard, shows up at Pat’s auto body shop, clearly rattled by her son’s and husband’s deaths. Later picking up her fixed wagon, she shares with Pat that she is leaving Blue Valley for good, warning him, “Don’t trust this town…. William didn’t have a heart attack.” She states that Joey wanted to be “just like” his Dad, which frankly puzzles Pat, who knew William to be a vanilla councilman. Later, while combing the local junk yard for parts, Pat spots the Zaricks’ cat and Denise’s discarded wagon, emptied of all belongings except for Joey’s magician’s hat.

What did you think of the episode “Wildcat”?