This week on TNT’s Snowpiercer, the introductory murder mystery seemingly came to a dramatic-ish close, while the tail set in motion a plan to make use of the purloined skeleton key.

With Nikki Genet’s butchered body found, Roche woke Layton in the middle of the night, while Melanie tasked a weeping Dr. Klimt with keeping things low key (in trade for Mr. Wilford’s forgiveness). Andre asked why no one acted on his tip about the killer’s identity, and Melanie explained that she was “waiting until morning.” Till observed that because the borders had been closed after the raucous Fight Night, the killer must be trapped back in third, so Melanie ordered Commander Grey to start a sweep of the train, from the tail forward.

At Andre’s insistence, Melanie escorted the detective to first class, where he was aghast to see so much good art hanging on the walls of those who had “boiled the Earth.” Melanie said his anger is justified, and he should use it to wrap the investigation. Arriving in the first-class dining car, Andre announced to the Folgers et al two things: “I don’t give a s–t who you are, and someone has a thing for chopping off third-class dicks.” When Andre pointed out that he didn’t see everyone who was at the fight — namely, the bodyguards — LJ Folger offered up that her own body man, Eric, hadn’t come home after the fight. And that he is in possession of a gun, which is a no-no on the train. Bristling at the thought of a tailie train detective searching her family’s quarters, Lilah Folger demanded to speak to Mr. Wilford, so Melanie placed a call (to engineer buddy Bennett). Melanie explained to her “boss” the Folgers’ obstinance and then offered the phone to Lilah, at which point the intimidated matriarch changed her mind.

While Eric holed up in the Chains, Andre rifled through the ex-Marine’s belongings, finding a J-hook used for beekeeping… and that has a knife-life edge on one end. Andre asked LJ, wearer of the worst poker face, about her relationship with Eric. “I better not talk about it,” she said, instead choosing to break out Eric’s vinyl and play/writhe to “Sealed With a Kiss.” As Papa Folger in the other room admitted to Melanie that Eric and LJ are, ahem, “close,” Andre laid out for LJ his working theory. “Eric screwed up,” he said. Castration is a crime of passion, and thus was not Eric’s idea. No, he was controlling the victim for somebody else. “You finally got to feel something when he held men down for you,” Andre suggested. Sensing the jig was up, Lolita-like LJ tendered a trade of sorts — she’ll use her resources to get the tailie a gun, if he keeps their li’l secret.

Meanwhile, breachmen Till and Oz searched for Eric in the Chains, eventually leading to a bit of a foot chase through the community’s two levels. Eric took Jinju hostage at one point, using her as a shield as he made his way to the subtrain area. There, cornered by Commander Grey’s men, Eric shot at a breaker box (hoping to cause a blackout/commotion?), but got winged by the ricochet. Hobbled, he was a sitting duck for the jackboots who swarmed and slaughtered him 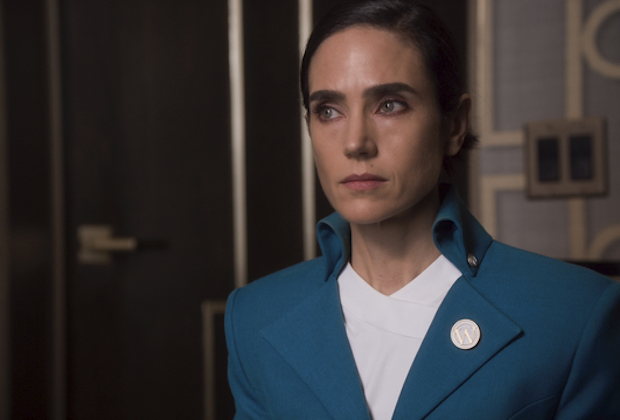 When Melanie informed Andre and the Folgers that Eric had died, LJ began sobbing (for effect), while Andrew signaled for the guards. He then announced that Eric had done what LJ had told him to do. Betrayed, LJ lunged for the detective, but was soon subdued. Melanie then announced to the train that “the murderer among us is dead,” with a second suspect in custody. “Order is restored,” she said, “and Mr. Wilford assures you that justice will prevail.” Sensing more than ever a very direct connection between the hospitality chief and Snowpiercer’s reclusive creator, Andre quipped, “You in charge of that promise of justice, too?” Amused, Melanie treated Andre to some sake in the Ocean Car… before dryly declaring that she won’t be letting him return to the tail, because he has “seen too much.” As Andre started to succumb to a drug she had slipped him, Melanie explained, “You figured it out,” and offered her apologies.

At episode’s end, we saw Andre being prepped for a drawer, as Melanie ordered Klimt to keep this one “off book.” She then stressed that the doc be extra careful with Layton, saying, “Mr. Wilford does not want him damaged.”

* Armed with the biometric key Andrew smuggled to Josie, the tailies plotted to make use of it, first by getting on contact with Astrid, a compatriot who “apprenticed out” of the tail years prior. To that end, Josie joined up with the Sanitation crew, and then used their 30-minute break to change clothes and sneak off to the third-class dining car and find Astrid. Upon learning that Andre had been tasked with solving a murder, Josie said they needed to get in touch with him, and Astrid agreed to try. At episode’s end, Astrid got word back to the tail via a capsule that had been smuggled inside one of the nasty-looking protein bars: “Layton is missing.”

* In the opening voiceover by Jinju, as she prepped some of her freshly harvested fish, it was mentioned that concurrent with Snowpiercer pulling away from the station seven years ago, the rest of the world’s “mega rich” retreated to bunkers to “upload their consciousness.”

* Speaking of Jinju, we learned via pillow talk that Till is nervous about being seen leaving her lover’s room in the mornings to return to third, because it is “weird” to be “dating up-train.”

Now that Snowpiercer‘s introductory murder mystery has been solved, will you keep tuning in?