The big difference in Psych 2: Lassie Come Home is right there in the title, in that Timothy Omundson plays a much larger role than he did in the first TV-movie, which was filmed shortly after the original cast member sustained a stroke.

Premiering on Wednesday, July 15 — aka the new Peacock streaming service’s national launch day — Psych 2 finds Santa Barbara Police Chief Carlton Lassiter ambushed on the job and left for dead, after which, in a Psych-style Hitchcockian nod, he begins to see impossible happenings around his recovery clinic. As Shawn and Gus return to Lassie’s side, they are forced to navigate the personal, the professional… and possibly the supernatural.

Because of Omundson’s full-on return as the titular Lassie — which meant sharing scenes with longtime scene partner and dear real-life friend Maggie Lawson (as Juliet) —  “This movie is far more emotional than, I believe, anything that we’ve done, especially in those scenes with Maggie and Tim,” showrunner Steve Franks shared during the cast’s ATX Festival at Home virtual panel. “When they were doing the scene, there was not a dry eye in the entire room. It was almost as powerful for us as it was for them.”

Now, lest anyone fret that Psych 2 is too bittersweet, “I just watched the clips that they’re releasing [of Lassie, and] I realized there are actually two poop jokes in the clips,” Franks shared with a laugh. “We’re trying to get the balance — a little bit of action, a lot of heart…. and yet as soon as Shawn and Gus (played by James Roday and Dule Hill) get into a room, they’re going to start bantering about something that is not pertinent to the situation at hand.” 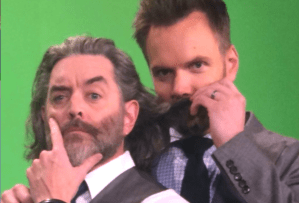 Making Omundson himself emotional was a casting surprise that everyone sprung on the actor, by covertly enlisting his real-life BFF Joel McHale for a mystery role.

Upon being asked by Lawson (with whom he has been paired on Santa Clarita Diet and other projects), McHale “was honored in every way…. He was just in,” Lawson shared during the ATX Q&A. Between the nature of breaking news, doing press and the actors’ real-life closeness, “It seemed not possible” to surprise Omundson, Lawson said, “but we managed to pull it off. We managed to get Joel to Vancouver without Tim knowing, and have this amazing moment.”

Other guest casting for Psych 2 includes Sarah Chalke (Scrubs), Richard Schiff (“He doesn’t get a chance to do comedy that often [and] he had a blast working with us,” said West Wing costar Dule Hill), and Alison Miller aka James Roday’s leading lady from ABC’s A Million Little Things.

“Everybody loves a basic cable comedy/network drama crossover…. A tale as old as time,” deadpanned Roday, who added that those who watch both Psych and AMLT “should get a kick out of seeing us on screen playing different people.” Added Franks: “I don’t want to give away who she is in the movie [but] it’s a really fun role.”

Want more scoop on Psych 2, or for any other show? Email InsideLine@tvline.com and your question may be answered via Matt’s Inside Line.