Award-winning UK actress Michaela Coel (Chewing Gum, Black Mirror) is taking her talents to HBO for I May Destroy You, a intriguing new dramedy that starts out charming… and ends its premiere with a sinister twist.

Coel — who also writes and co-directs the series — stars as Arabella, a young author whose first book Chronicles of a Fed-Up Millennial turned her into a minor celebrity… and who’s still working on her follow-up. Sunday’s premiere opens with Arabella saying goodbye to her Italian boyfriend before heading back to London, and he doesn’t exactly seem to be head-over-heels for her: When she asks if he’s going to miss her, he grumbles, “I don’t like this sort of conversation.” He adds, “When I’m ready to call you, I call.” A real sweetheart, huh?

When Arabella gets back home, she assures her pushy literary agents that she’s nearly done with a draft of her new book: “Just some minor, minor revisions, and then I think we are good to go.” They politely needle her into submitting what she has so far… at 6 am the next day. That means she’ll need to pull an all-nighter to crank out something brilliant, and after a chat and a smoke with her roommates, she heads into the office, cracks open her laptop, turns on some tunes and faces an intimidating blank page. 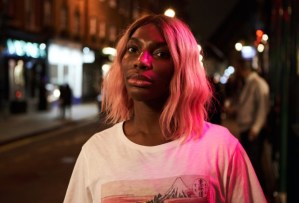 Arabella considers her options… and then sets an alarm on her phone for one hour and hits the streets. She has a happy reunion with Simon and takes a photo with a fan before they pile into a rowdy karaoke bar. There, Alissa texts Simon and gives him a kiss — she faked the mom story so they could be alone! — and they all move on to another bar, where they down a tray full of tequila shots from some random guy named David. They all dance with wild abandon… but soon, Arabella is stumbling and knocking things over. One tequila shot too many?

Next thing we know, she’s up at the crack of dawn, hammering out her draft and sending it off to her agents. She quickly tidies up and goes to meet them, and they’re a bit baffled by what she sent: “It becomes rather abstract… is this finished?” She runs off to the bathroom to read her pages and barely recognizes what she wrote. Plus, the editors notice she has a wound on her head that’s still bleeding. When she leaves the meeting, she doesn’t know how to get home, asking several passersby for help. Another fan puts her in a cab, and once she’s home, she has a memory flash before her eyes: of what looks like David violently thrusting above her. Was she raped? Did he spike her drink? Even Arabella doesn’t seem to know.

Give the premiere of I May Destroy You a grade in our poll, and then hit the comments to share your post-premiere thoughts.