It’s wabbit hunting season once again, only this time, someone has come for Elmer Fudd’s gun.

In the new Looney Tunes Cartoons series (which debuted May 27 on HBO Max), the huntsman is back in action, but his signature rifle is gone. (And he often doesn’t even appear in his hunting outfit.) Instead, Fudd — as does Yosemite Sam, who used to pack a pair of pistols — sometimes swings a scythe. The switch-up is reportedly a change made in response to U.S. gun violence. Yet despite this modification, the classic Looney Tunes violence and mayhem will still be allowed.

“We’re not doing guns,” executive producer and showrunner Peter Browngardt told the New York Times. “But we can do cartoony violence — TNT, the Acme stuff. All that was kind of grandfathered in.” 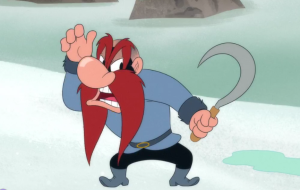 The show will stay true to the spirit of the original, while reflecting modern sensibilities, the EP said. What does that mean exactly? Maaaaany sticks of dynamite, elaborate booby traps and cannons-at-close range will very much be in play, in addition to the requisite anvils, bank safes and pianos that famously fall on unsuspecting heads.

The EP also touched on another modern issue plaguing youth and society today: bullying. “We’re going through this wave of anti-bullying, ‘Everyone needs to be friends,’ ‘Everyone needs to get along.’ Looney Tunes is pretty much the antithesis of that. It’s two characters in conflict, sometimes getting pretty violent.”

An all-new series from Warner Bros. Animation, Looney Tunes Cartoons finds many of the beloved classic characters in their standard pairings in simple, gag-driven and visually vibrant stories. The new series consists of 80 11-minute episodes, each comprised of animated shorts that vary in length and include adapted storylines for today’s audience, in addition to forthcoming holiday-themed specials.

Are you glad to see Looney Tunes ditching their guns? Sound off in the Comments below!