The Tanner-Fuller-Gibblers have always been a little extra, but they truly outdid themselves in Fuller House‘s series finale, giving us a triple wedding, an emotional surprise and a dramatic fake-out all in one day.

Let’s start with that first one: When the She-Wolf Pack’s wedding venue is suddenly seized on their big day — one of several curses caused by Jimmy seeing Stephanie after midnight — the ladies opt for a more intimate, DIY ceremony in their backyard. The whole thing turns out picture perfect, of course, prompting Joey to ask, “Man, if DJ can put this together in one day, what the heck was she planning for eight months?”

In fact, the wedding is so spectacular that it brings out some of the most unlikely characters from the gang’s past, including CJ, the woman whose life was destroyed when Steve broke off their engagement to be with DJ. Honestly, good on her for not burning the place down — or at the very least beating DJ senseless with an enormous koi fish.

“It’s crazy, but we laugh about those things,” Candace Cameron Bure tells TVLine. “Like, of course we have our exes there. These characters are just so likable and redeemable. Everyone seems to love the Tanners. The whole wedding really was incredible with everyone who came back. There were no professional background extras in that. It was almost all people who had been on the show before. Our producers basically sent out an e-mail to all of the past people from the show, and everyone kind of did it for free. Everybody just wanted to jump in for the day and be a part of it. And if they weren’t a past cast member, they were someone’s family member. My mom was there, Jodie [Sweetin] and Andrea [Barber]’s parents were there, even my aunt was in there. It was all really special people at the wedding.” 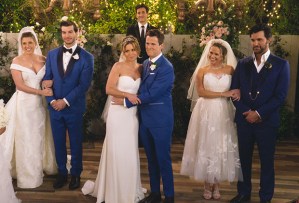 And because this is Fuller House, the triple wedding (officiated by Joey McIntyre!) is immediately followed by another enormous life change: Kimmy, Stephanie and their families have to move out so they can be closer to the two Uncle Monty’s locations — even though one of them is in San Francisco, while the other is only a 40-minute drive away. (That’s right, I can use Google Maps!) The mass exodus gives DJ an excuse to deliver a legitimately heartbreaking goodbye speech, reminding everyone how much they mean to her.

“A lot of those words felt so real,” Bure says. “I actually couldn’t memorize that dialogue until the day of the show. When we rehearsed it, I just kind of read the words off the page. I couldn’t go there. I would have broken down every single time, because the words meant so much. They weren’t just words that a writer wrote. I meant every word that I said. It was a tough scene to shoot, and we only shot it twice because it was so emotional.”

Fuller House Cast, Then and Now

Fortunately, DJ’s tears are for naught, because Kimmy and Stephanie wait until the last possible moment to change their minds — they’re staying! Not only that, but Stephanie is also pregnant with baby No. 2! It’s a lot to process all at once, especially for Bure, who swears she didn’t see it coming.

“It was totally a surprise when I read it at the table read,” she recalls. “Talk about getting all the feels. I was so sad that they were moving out as we were reading that script. The thought of the Fuller house being empty, or even just having one family in it, made me so sad. So when they came in at the very end, I started bawling. I was like, this is perfect. This is absolutely perfect.”

What did you think of Fuller House’s series finale? Grade it below, then drop a comment with your full review.