Fuller House returned for its final nine episodes on Tuesday, kicking things off with a surprisingly emotional three-way engagement party for the She-Wolf Pack.

In honor of the ladies’ collective betrothal, Joey decided to throw them an impromptu celebration — so impromptu, in fact, that neither Danny nor Jesse were able to attend. (Becky was also MIA, but we’ll address her whereabouts at another time.) The real tragedy came when a singing telegram revealed that Mr. and Mrs. Gibbler also had to miss the momentous shindig, crushing Kimmy and Jimmy’s hopes of reuniting with their parents after spending decades apart.

“I’m honestly torn over that storyline,” Andrea Barber admits to TVLine. “I love that we finally understand where Kimmy is coming from and how she became who she is, but I’m also sad that we didn’t get to meet them. I want to meet the Gibblers!” (For what it’s worth, Barber said she’s always envisioned someone like Jane Lynch playing the role of Kimmy’s mother, while I’d throw Amy Sedaris’ hat into the ring.)

Fuller House Cast, Then and Now

Given that this mess was “entirely” Joey’s fault, the artist formerly known as Ranger Joe offered Kimmy one of his classic pep talks, even offering to walk her down the aisle if her parents also skip the wedding. Cue the waterworks!

“That was a beautiful moment,” Barber says. “Joey and Kimmy have always been the sidekicks. They’re the funny people without emotions who just provide one-liners and bring comic relief. You don’t get many chances to see these characters get emotional, and this was a perfect chance to talk about why Joey and Kimmy were around so much. Joey and Kimmy didn’t have great connections with their biological family, so they went to the Tanners to get that love they’d been seeking all of their lives. It was so great to finally connect these dots and connect these characters to each other.”

Barber said it was “easy to bring those emotions,” but the difficulty came in striking the right balance. “I didn’t want to break down crying, because that would have been a little much for Kimmy Gibbler. It was about finding that restraint in how much emotion to really show — enough to let the viewers know that this is real, that this is a big deal to Kimmy. It was such a sweet moment between Dave and I. I will cherish that scene for the rest of my life.” 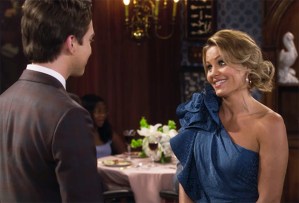 Tuesday’s premiere also touched upon the changes that would inherently come with Steve moving into the Fuller house. Steve did his best to assure Jackson that he wasn’t trying to replace his dad, but DJ’s oldest son drew his own conclusions when he thought she was getting rid of Tommy Sr.’s nice suit. Steve remedied the situation by having the suit tailored to fit Jackson, leading to an engagement party entrance DJ will never forget.

“It seems kind of weird to say, because it’s just a TV show, but it really has been 30 years of our lives,” Candace Cameron Bure tells TVLine. “We, as the original cast, are so protective of the show and those moments. They really do mean a lot to us. And of course we love each other, so it’s really easy to play the emotional scenes. Those are the scenes that really make the show. That’s what Full House was all about, too — those touching moments where you learn a lesson or you get a hug or you’re going through a hard time and someone consoles you.”

We’ll have more coverage on Fuller House‘s final season as the week rolls on. For now, grade the premiere below and drop a comment with your full(er) review.