This week on DC’s Stargirl, just as Henry King Sr. aka Brainwave was sidelined by a zap from the cosmic staff, another ISA baddie made his presence known (and how!). To the public he is Jordan Mahkent, head of the folksy American Dream project. But among his Injustice Society brethren, he is known as Icicle — as in the one who years ago killed Starman, and who this week iced councilman William Zarick aka The Wizard after subjecting his son to a fatal accident.

Is Courtney/Stargirl right to be rattled by Icicle’s arrival? TVLine spoke with English Sleepy Hollow alum Neil Jackson about the iceman’s coming.

TVLINE | That was quite an entrance you made.
I was cracking up — one, when I read the script, and two, when I got to see the end of Episode 2 and how they set it to The Killers’ “The Man.” I was laughing out loud. Like, who do I need to pay off for this entrance I was just given? It was spectacular.

TVLINE | Is it safe to say he is the ruthless face of the Injustice Society moving forward?
Yeah, yeah, he’s the Big Bad. We talked about it at the and of Episode 2, the idea that “Daddy’s home.” He’s here to step in and clean everything up.

TVLINE | Coming out of the flashback to eight years ago, Jordan had two agendas — to “make the world pay” for what it did to his wife, Christine, but also to “fix this country” for their son. Is he completely done with the first agenda?
Almost. We have a scene coming up where we see there are a few loose ends that he needs to tie up, so he has to take some “business trips.” That’s why he has been away for eight years, he’s been hunting down everybody who was directly or indirectly responsible for the death of his wife and bringing them to justice. 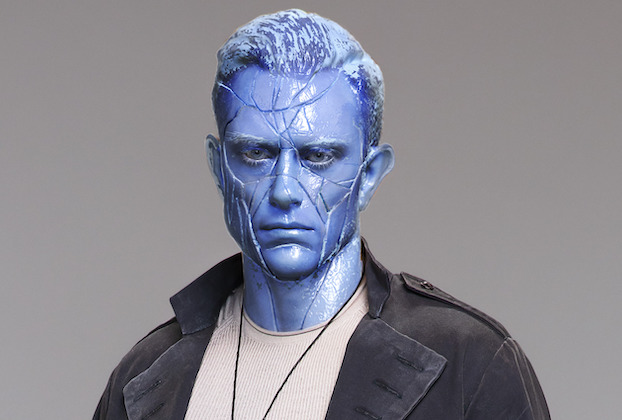 TVLINE | Which is, you know, somewhat “noble.”
The thing with this character, when [Stargirl creator/series EP] Geoff [Johns] pitched him to me, is I completely got him. If my wife had ended up dying at the hands of a chemical company who covered up what they did, I would want to go full Icicle and destroy the planet, to a degree. He’s a completely relatable character in that regard. He has suffered this great pain, and out of that pain has come this two-pronged plan — to get retribution for what happened to her, but also to make society a better place. And he makes society a better place through both means at his disposal — the boardroom, by injecting cash into underprivileged communities, and the Injustice Society, in a plan that gets revealed in a couple episodes.

TVLINE | How much are you allowed to say about Project: New America?
It’s a broader-reaching plan to seismically change communities. The first prong is about almost trying to restore America to its “Norman Rockwell” values of family and community, which is something I very much relate to. The Icicle side of the plan, I can’t talk a great deal about.

TVLINE | Is it insidious?
No, it’s an extension of [the first prong] but using powers. That’s the best way I can say it. And the greatest sort of comparison I can make is Thanos. Thanos isn’t a villain; Thanos thinks that by indiscriminately destroying 50 percent of the universe’s population he will make everyone who survives far better off as a result. Now, that’s not what Jordan is doing, but the idea is still the same. He is going to cause change that some people won’t agree with, but ultimately they’ll realize it’s for the best. 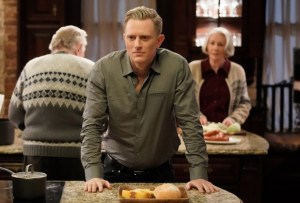 TVLINE | How does Jordan’s status as a first-generation immigrant influence what he is up to?
Hugely. He is American, but he is from Norway, so he has a broader perspective on the way things are. We touch upon how the community he had in Norway is a very tight-knit family community. He has his parents over with him, they still speak Norwegian, he’s still very much in love with his roots, and he wants to bring that sense of community to the States.

TVLINE | His parents also seem chill about him killing the occasional person.
[Laughs] That’s one of the things I loved about the end of this episode. His parents are there and they’ll clean it up for him! “We know what you are. We’ve got this.” There’s a real sense of solidarity but also sadness. When we played that scene, it felt incredibly heavy; it’s not something he took joy in doing. He didn’t want to kill The Wizard, and he’s very sorry for The Wizard’s pain, but he was standing in the way of a plan that Jordan spent the last eight years putting into motion. And he just can’t have that.

TVLINE | When the Wizard’s kid got hit by that truck, and his playing cards went flying in the air, it was heartbreaking. I said to Geoff, “This episode is as bleak as the show gets, right?”
Yeah, but it’s got to set everything up. Stargirl needs to know that her actions have reactions. This little girl has decided that she wants to play in this sandbox, but she doesn’t know the rules. Jordan is saying to her, “All right, if you want to play, there are going to be repercussions, and here is a stark lesson in that.” 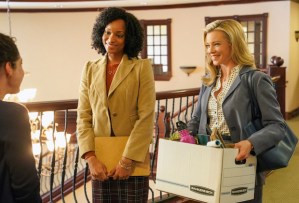 TVLINE | Why do you think Barbara has gained Jordan’s attention?
Barbara was this unexpected thing for him. Pun intended, obviously he is cold. After the death of Christine, he turned cold, literally and figuratively. All sense of joy and happiness left him, and he channeled all of his hate and pain into this two-pronged plan. And then along comes this bubbly, beautiful, intelligent being, played wonderfully by Amy Smart, and he just didn’t expect it. It awakens in him these feelings he hasn’t felt for a very long time — happiness, optimism — and that’s very dangerous to him because, all pun intended, that optimism and joy starts to thaw part of him. And that can seriously jeopardize the plan. It’s a really fun relationship that we explore. 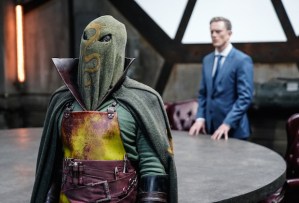 TVLINE | Lastly, outside of your own character, who do you think is the coolest villain?
I mean, Brainwave is the most powerful. I joked with Geoff, “You had to put Brainwave in a coma,” because if he was around, he would just need to do a drive-by past the Whitmores’ house and give them all brain aneurysms. He’s too powerful, so Geoff had to take him off the board a bit.

I personally love Dragon King, played by Nelson Lee, who shows up in I think the next episode. He is just so odd and imposing and brilliant. The character in the comic books is an Asian man who survived World War I and who has been doing experiments on himself ever since, trying to elongate his life, and the result has caused mutations. He is such a brilliantly odd, dark character, and Geoff interestingly laces him with some quirky humor. Putting the mix together, you can’t get a handle on him. Is he a Funny or Die character, or am I desperately scared of him? It’s simply brilliant.

Want more scoop on DC’s Stargirl, or for any other show? Email InsideLine@tvline.com and your question may be answered via Matt’s Inside Line.