This week on TNT’s Snowpiercer, Layton finally got a big lead in his investigation — but is it too little, too late?

Ask Oz is precisely what Layton and Roche then do, cornering the breachman in the dining car. Oz offers little intel, claiming he only traffics the drug for “humanitarian reasons,” as he recently did for tailie Winnie’s amputated mother. But later, after getting wind from Jinju (who is Till’s lover) that Nikki Genet is actually conscious, Layton and Till check on the extremely out-of-it witness. Before getting interrupted by Melanie, they notice that Nikki has black gums — a sign of Kronole abuse. It is then that Dr. Klimpt confirms that Kronole is derived from the drug he uses to put people in suspension inside the drawers. He skims some off the top, then trades it, to a janitor/courier, for supplies he needs.

Before Andre works on that new lead, he learns from Melanie that Miles had been accepted into the apprentice program, and he is allowed to check in with the kid. Andre then asks to personally let Miles’ mother figure, Josie, know that he is doing very well, but Melanie balks. 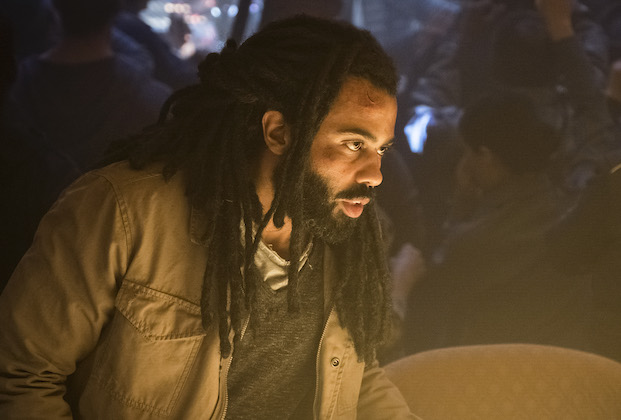 Suspecting that “Fight Night” — which Mr. Wilford/Melanie fast-tracked as a(n obvious) distraction from the “unrest” of the past 48 hours — might be a good place to confront Kronole couriers, Layton and Till head to the Night Car. Andre asks bartender Zarah to get word to the head janitor, Terence, that he wants a sit-down. Terence at first sends Oz to decline the invite, but Layton presses the issue, promising that he’ll lose his Till tail. Layton does just that, and is led to Terence’s loft in the Chains. Terence complains that the detective’s investigation has dried up his chemical pipeline. Andre says that if he can get a lead on the murder, Mr. Wilford might stop caring about the K. Terence shares that he saw Sean Wise the night he died, in the company of a guy from first class with a buzz cut. Before parting ways, Andre cryptically tells Terence, “I need something very small…,” as he hands over his wedding ring in trade.

Andre dangles his juicy new lead in front of Melanie and Roche, insisting on seeing Josie before he shares it in detail. Melanie obliges, and Andre is taken to the tail, where he reports to Josie that Miles is doing really, really well — he has his own fork and everything! — before prattling on about how he was “all wrong” about him and Zarah, and how he it is Josie he really misses. He then gives her a deep kiss, before getting dragged away, shouting, “It’s only doors between us!” Shortly afterward, we see Josie in private pull from her mouth a plastic capsule, inside of which is a tiny biometric key which we had earlier seen being extracted from a severed arm (Sean’s?) and traded back and forth throughout the train in a montage.

As for Andre’s big lead, he better share it with someone soon, because Erik — the buzzcut bodyguard who works for the Lolita-like LJ Folger and her fancy-pants folks in first class — has just brutally bludgeoned two people in order to confront Nikki in her infirmary bed.

What did you think of the episode “Access Is Power”?