Well, neither Eve nor Villanelle was on the verge of death when Killing Eve wrapped up its third season on Sunday, so we suppose that’s an improvement.

The Season 3 finale saw the duo — who had been separated for most of the season — come together for a emotionally charged slow dance, as Villanelle confessed she’s tired of being a hired killer. Then they were merely bystanders as Carolyn held Konstantin at gunpoint, demanding to know what happened to her son Kenny… and then killing her crooked MI6 colleague Paul. (Kenny’s death was due to an accidental stumble off the roof, Konstantin revealed… or so he claimed, anyway.)

Eve and Villanelle ended up on a London bridge together, with Eve admitting: “When I think of my future, I just see your face over and over again.” (“It’s a very beautiful face,” Villanelle replied.) The two tried to walk away from each other, standing back-to-back and striding off in different directions… but both couldn’t help but turn around and look into each other’s eyes again. So maybe the death we witnessed in the Season 3 finale was the old cat-and-mouse Killing Eve, and now Eve and Villanelle are in each other’s lives for good?

The finale gave us a lot to untangle, so TVLine reached out to Eve executive producers Suzanne Heathcote — Season 3’s head writer, who co-wrote the finale — and Sally Woodward Gentle to get some answers.

TVLINE | I have to admit: I got a little worried when I saw Eve and Villanelle walking out onto that bridge…
SALLY WOODWARD GENTLE | There’s so much that could happen on a bridge. You should’ve worried! There were some scenarios that were played out, I’ll just say.

SUZANNE HEATHCOTE | We played with more violent endings, not to each other, but in terms of cliffhanger stuff. But I think the feeling amongst us all was: We’ve had two life-and-death cliffhanger moments in the previous two seasons, and it was really important to do something different this time. It’s still a cliffhanger, in as much as: Where do they go from here?

The one thing I knew that from day one, even before I got the gig, when I was pitching, I was like, “I don’t want them committing an act of violence against each other. I don’t want a violent ending. I feel like we have to see the relationship grow to a different place.” 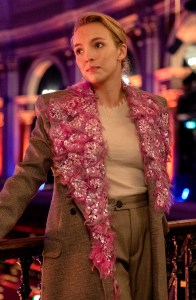 TVLINE | The romance between Eve and Villanelle is no longer just subtext; it’s text. I’m thinking of the slow dance scene, in particular. But will we ever see them explore their relationship in earnest?
HEATHCOTE | The relationship is still very dangerous for both of them. And the reality of that cannot be denied. That being said, they both acknowledge that danger and yet still admit that they’re in each other’s lives regardless at this point… They would never be able to have a conventional relationship in the way we would see it, just because of who they are. They know that being together, it’s almost a choice they can’t deny, but it’s the most dangerous choice to them both as well.

I feel like Eve has this sort of speck of dark inside her that she’s hidden for so long, and Villanelle, it’s almost like she has this speck of light inside her that she’s hidden as well. And they both see it in the other, and once you’ve been seen fully by someone, it’s very hard not to return to that, because that’s when you feel most alive, I think.

GENTLE | I think that their attraction to each other is really holistic. It’s a thrill and a glow that they get from being in each other’s presence. So who knows where that could go?

TVLINE | I have the same question that Carolyn did: Who is Villanelle, if she’s not a killer? It’s something she’s still trying to answer for herself, right?
HEATHCOTE | After she kills her mother, we were saying it’s almost as if every kill up until now, there was something in her trying to kill her mother. And then when she killed her mother, it’s just that the desire for it has gone. It’s not that she’s suddenly grown a conscience. She was never a serial killer. She always did it for money, or for material wealth, but she got a thrill out of it. And suddenly, the desire to do it has left her. And when that’s the one thing that people think is the only useful thing about you, it’s like, what does that leave her with? So who knows what happens in Season 4, whether she regains that thrill again? Maybe she does, or maybe she goes on a whole new journey.

GENTLE | She [kills] with impunity, and it doesn’t give her any sleepless nights. She’s particularly good at it. So what happens if anybody crosses her again, or there is a frustration? Apart from her mother, most of her kills have been ordered by The Twelve, and they’ve been on a professional basis. I think it’s interesting to see what it would look like if she became a little bit more untethered. 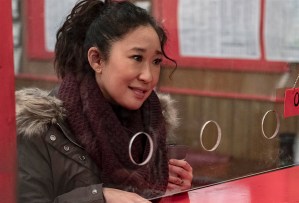 TVLINE | Carolyn advised Eve to go “cold turkey” on The Twelve, and on Villanelle, presumably. But who is Eve, if she’s not chasing Villanelle?
GENTLE | Villanelle has taken her to a very, very dark place, but it’s also awoken something in her that she cherishes, I think. What does that look like, if she allows it free rein? I think that’s an interesting aspect to look at. Because she’s kept stuffing it down. … Eve has acknowledged to Villanelle that they both contributed to the death of Dasha, and that means that she’s been complicit in quite a few peoples’ deaths. What has her exposure to Villanelle given her? It clearly makes her feel alive. That thrill is still there.

HEATHCOTE | Eve has fought it more than Villanelle. Now she’s acknowledging that Villanelle is in her life. There’s no fight left. The fight is gone, as far as that’s concerned… We really see Eve acknowledge now that her life, by her own actions — it’s not just Villanelle — her own actions and her own hand have dismantled her own life.

TVLINE | Kenny’s death turned out to be rather mundane, according to Konstantin — but can we really trust Konstantin’s version of events?
GENTLE | Did you not believe him? I don’t think you should ever believe Konstantin about anything!

HEATHCOTE | I wouldn’t know if I’d definitely believe Konstantin. I think Konstantin will say whatever he needs to say to save his skin. I have a very specific opinion, and I don’t want to dictate a definite answer, but I would say that’s an opaque one there. The ‘did he/didn’t he’ is definitely not answered.

TVLINE | Finally, I have to ask: Is Dasha really dead?
HEATHCOTE | She was written to be dead in the script. She’s dead. They may find a way to resurrect her in Season 4, but yeah, the way we wrote it, the intention was: Her heart had stopped. She’s gone. She’s left us.

Grade the Season 3 finale — and this season as a whole — in our polls, and then hit the comments to share your post-finale thoughts.