The case against Jacob Barber was closed in some form during Friday’s Defending Jacob finale. But don’t be fooled by the photo above, in which the Barber family looks relieved and optimistic: There isn’t a happy ending in store for them.

Before you give us your thoughts on “After,” let’s break down what happened in the miniseries’ conclusion:

FATHER KNOWS BEST | We pick up shortly after Leonard Patz confessed, in writing, to murdering Ben Rifkin. Early the next morning, Andy gets a call from Jacob’s lawyer, Joanna, informing him that Leonard hanged himself, and the cops have confirmed it’s his handwriting on the confession. The charges against Jacob are swiftly dismissed, and the Barbers have their first good day in a courtroom that week, beaming as Jacob is told he’s a free man. (Andy’s father, meanwhile, grins — for the first time in his life, I suspect! — as he watches the news from prison that Jacob’s name has been cleared.)

You’d be right to suspect, though, that this all seems a little too easy. For one thing, the Barbers are confronted by Ben Rifkin’s father, Dan, in the courthouse parking deck. “I know it was you!” Dan says to Jacob — but before he can get close enough to actually hurt anyone, Dan is stopped by Father O’Leary, the man who’s been watching the Barbers’ house in that old Lincoln. He reveals to Andy that he’s an old friend of Andy’s father, who was asked to look out for the family. “Anything for ol’ Billy,” O’Leary deadpans after letting Dan go.

After the charges against Jacob are dropped, the family resumes some version of normalcy: They’re laughing around the dinner table again, and they’re considering moving to Colorado to get a fresh start. But when Andy’s former colleague Lynn makes an offhand comment about Leonard Patz’s death, noting that some elements of his confession and suicide “didn’t add up,” Andy starts ruminating. And later, when he opens the trunk of his car and spots the crowbar he used to confront O’Leary a few weeks back, a lightbulb seems to go off.

Andy then pays a visit to his father in prison, having pieced together what really happened to Leonard Patz: Billy Barber must have hired O’Leary to not only “look after” his family, but to kill Patz and force a confession out of him, ensuring that Jacob would go free. As Andy and Billy speak on the phone through plate glass, Billy doesn’t explicitly confess to anything, but he drops enough hints that he did indeed orchestrate Patz’s death. (Meanwhile, viewers at home get confirmation of Billy’s scheme: We see another angle of Patz writing his confession, which he penned while O’Leary held him at gunpoint, followed by O’Leary strangling Patz as he tried to leave his apartment with a suitcase.) 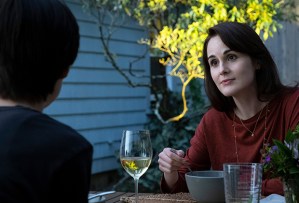 GOING SOUTH | Despite Andy and Laurie’s new, post-trial pact to keep no secrets from each other, Andy does hide his new revelation about Leonard Patz’s potential innocence. Instead, the Barbers take a family trip to Mexico for the Christmas holiday, and Laurie proves that ignorance is indeed sun-drenched bliss.

But their vacation takes an unsettling turn when Jacob and Hope — a teenage girl with whom Jacob clicked upon meeting her in the hotel lobby — go to a New Year’s Eve bonfire not far from their resort. When Andy and Laurie return to their hotel room after a romantic dinner together, they’re surprised to see that Jacob has already returned from the bonfire… but he’s acting a little weird. He’s no longer wearing his dress shirt, which he says he mistakenly left at the bonfire, and he’s speaking almost robotically as he explains that Hope stayed behind at the event, which was ultimately not the kind of party that Jacob enjoys. (Interestingly, after everything the Barbers have been through, neither Andy nor Laurie seems all that worried by Jacob’s monotone responses and/or the fact that Jacob left Hope to her own devices at the bonfire.)

The next morning, the Barbers’ recent legal nightmare seems to start anew: Cops approach Jacob and Laurie at breakfast, revealing that Hope never came back to the hotel, and they bring Jacob in for three hours of questioning. Though Andy initially takes this all in stride, he falls apart later that evening. In the middle of the night, Laurie wakes up to find Andy sitting outside, plastered on whiskey, divulging at last that Leonard Patz didn’t really take his own life. “Do you want me to tell the police?” Andy slurs to his wife, who is overcome with horror at the realization that Jacob may have hurt Ben — or Hope — after all.

Fortunately, the authorities find Hope alive the next day; she had met an older guy at the bonfire who slipped something into her drink and took her home, until his roommate freaked out and called the cops. But even with Hope safe and sound, something seems to have snapped in Laurie. The Barbers leave Mexico three days early, and Laurie is all vacant stares and hunched shoulders when they get back to Newton, looking at Jacob with newfound wariness. “It’s like living with a ghost,” Andy admits to Laurie, who barely seems to register her husband’s brutal honesty.

CRASH INTO ME | The next day, Laurie takes Jacob to get a haircut — doesn’t she know we exclusively do buzz cuts over the kitchen sink these days? — and uses the car ride as an opportunity to confront him about Ben’s death. Jacob isn’t paying attention at first, as he’s immersed in funny videos on his phone. But as Laurie’s emotion builds, Jacob is shocked when she asks him, point-blank, if he murdered Ben… and she’s starting to drive worryingly fast through Newton’s winding roads in the pouring rain.

Meanwhile, as Andy packs up the house for their move to Colorado, he discovers that Laurie has thrown Jacob’s baby photo album in the trash. He tries to call her while she’s on the road with Jacob, but she declines every time. And despite Jacob’s insistence that he didn’t kill Ben, Laurie confesses that she doesn’t believe him, and it’s eating her up that she’ll never know the truth. Jacob begs her to stop driving so fast, but she only speeds up — and as their car approaches a tunnel, Laurie (seemingly intentionally) swerves right into the tunnel wall, crashing the vehicle.

At this point, it’s finally revealed to us why Andy has been getting questioned by Neal Logiudice throughout the show’s eight episodes. This grand jury indictment isn’t for Jacob; it’s for Laurie, who stands accused of intentionally trying to harm her son. But despite Neal’s best efforts to pit Andy against Laurie, Andy won’t turn on his wife. “She was speeding. It was raining. It was an accident,” he maintains, stony-faced.

When Andy visits the hospital later that day — six weeks after the car crash — we discover that Laurie is a bit banged-up, but alive. Jacob, meanwhile, is comatose and intubated, though Laurie mentions that the doctors are seeing encouraging signs. (Book spoiler alert! This ending is different from William Landay’s novel, in which Jacob dies instantly after the car crash. Also, in the book, Hope Connors isn’t found alive; her body is discovered weeks after she goes missing, and Laurie notices a red stain on Jacob’s clothing after the girl’s disappearance.)

Andy, somehow, remains a supportive husband after all of this, and he informs Laurie that the jury voted not to indict her, after all. Laurie is still wracked with guilt, though, wondering what Jacob will think of her if he ever regains consciousness. She tries to recall the exact events of the car crash — but Andy encourages her not to dwell on it.

With that, Andy heads home alone for the night. He pours himself a drink and eats some Chinese takeout, then visits Jacob’s empty bedroom, where he sits on the bed in the darkness, thoughtful.

OK, your turn. What did you think of Defending Jacob’s finale? Do you think Jacob was guilty of murdering Ben? Grade the episode in our poll below, then drop a comment with your full reviews.