ABC’s To Tell the Truth this Thursday perhaps pulled off TV’s best one-two punch plot twist of the week, so I am here to talk about it rather than catch an extra half hour of sleep.

In the final segment of this season’s third episode, judges Thomas Lennon (Reno 911!), D’Arcy Carden (The Good Place), Alfonso Ribeiro (AFV) and Andrea Savage (I’m Sorry) were tasked with determining which of three Women of a Certain Age had served as a pregnancy surrogate for one of their children — meaning, they gave birth to their own grandkid.

Which is, in and of itself, interesting and all. Sure.

But after the guesses were locked in and the real grandma surrogate was revealed — SPOILER ALERT, it was the woman on the far left in the photo, who carried a baby for her son and his husband — To Tell the Truth did that thing it does, introducing us to the two imposters.

Well, No. 3 announced herself to be Cassandra Peterson. And if you hadn’t recognized her already, her name alone surely gave you that extra nudge. Because she is Elvira, Mistress of the Dark (sans a certain amount of makeup and underwire)! It’s been some years since I’ve seen Peterson out of character, so that one got me good. 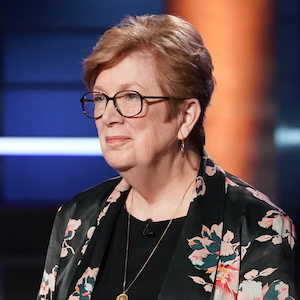 That was a plenty fun twist by itself. But To Tell the Truth was not yet done. Nope.

Imposter No. 2 then went on to identify herself by pulling off her (somewhat obvious) wig, and — holy callback, Batman! — it was the same woman from this episode’s opening round, a bona fide master of disguise who used to work for the CIA. We and the judges (and a gobsmacked host Anthony Anderson) had just met her not 45 minutes earlier, and she pulled the wool (or, synthetic hair) right over our eyes with this end-of-show encore.

For a show that is not Press Your Luck, To Tell the Truth dealt quite the series of whammys. Were you watching, and what did you think?