DC’s Stargirl this week may have vanquished one foe, only to acquire a formidable archenemy.

Following her close call with Brainwave — who found left behind a singed half of a BVHS student ID — Stargirl was whisked to safety by Pat in his giant robot armor, which he said he first started building after Starman died. When Courtney described her foe and his abilities, Pat recognized him as Brainwave, and proceeded to give a 411 on the Injustice Society. Courtney is anxious to know if this Brainwave killed her “dad,” and while Pat remains skeptical that Starman was indeed her father, he makes clear that it was Icicle who dealt that death blow. Now the question is: Was it pure coincidence that Brainwave and Pat both wound up in mild-mannered Blue Valley?

Late that same night, Blue Valley councilman William Zarick is woken by a visit from Brainwave aka Henry King Sr., after first retrieving his Wizard wand from a safe. “We have a problem,” Henry declares, explaining the resurfacing of the cosmic staff. Not wanting to waste any time — and suspecting that William might make a run for it with his family at the first hint of danger — Henry says he already has summoned “Jordan.” Henry then alludes to the ISA’s grand plan, reminding William that Blue Valley is “the perfect test case” for what they call “Project New America.”

Pat, continuing a brief history of the Justice Society, tells Courtney that Hourman survived that brutal confrontation 10 years ago, then proceeded to follow the ISA’s trail across the country — only to die, with his wife, in an accident upon moving to Blue Valley. Pat in turn lost the ISA’s trail, and surmised that perhaps they had left the country. After all, he wouldn’t have moved Barbara and their families here if he thought supervillainy  was brewing! Pat warns Courtney about Brainwave possibly identifying her, explaining that flashy costumes help divert the eye from studying faces too closely. When Courtney declares that she will rightly suit up — “This is my chance to do something for my dad” — Pat shoots down the idea, but his stepdaughter refuses to sit on the sidelines.

Looking to take on this fight himself, Pat climbs into his robot suit and we get a comical training montage set to Johnny Cash’s “One Piece at a Time” (which was a song pick by actor Luke Wilson) and in which he repeatedly struggles to successfully launch his “fist” missile. That morning, Barbara comes down to breakfast to find both Courtney and Pat bruised up, though they both blame it on a problematic basement step. Courtney then dashes off to school, grabbing Starman’s old costume and abusing several home sec sewing machines to refashion it into something teenage girl-friendly. Henry King Jr., meanwhile, woke up to a bit of a grilling from his dad, who used his powers to confirm that it was a girl who whaled on Junior and blew up his car. Henry then tests Junior’s own capacity to read minds, but comes up empty.

Elsewhere, Barbara reported for work at The American Dream, where CFO Mr. Sharpe shot down all of her fundraising ideas. Pat meanwhile paid a visit to Crusher’s gym, where he was emphatically pulled into a training sesh set to Karate Kid‘s “You’re the Best.” 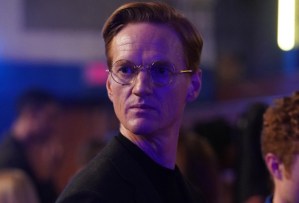 While lunching with her fellow “losers,” including Beth who video chats with her mom, Courtney gets wind of the school’s Open House that night — as does Henry King Sr., who works alongside Beth’s mom at the hospital. Both of them decide to to use the event to draw out the competition. That evening, after much circling the gym, Courtney lays eyes on Henry Sr., and he hears her mind shout, “Brainwave!” They confront each other plainly in a nearby hall, where Brainwave realizes that Courtney believes herself to be Starman’s daughter. He makes his terms clear: bring the cosmic staff to me at midnight, or I’ll kill your mother, making it look like she died of a painful stroke.

Courtney apprises Pat of what’s what, expressing her POV that the cosmic staff gives her the chance to exact justice for her dad and Pat’s other JSA pals. Pat, though, insists on going it alone, advising Courtney to take her mom and his son far, far away if he isn’t back by morning. But after a mother/daughter heart-to-heart during which Barbara shares her big dreams for life in Blue Valley, Courtney decides to suit up, arriving at the high school parking lot just as Pat’s robot is about to get crushed by Brainwave between two vehicles. Announcing herself, Stargirl gets off a few cosmic zaps (wrecking a school placard in the process!), after which Brainwave begins telekinetically lobbing parking space curbs and signs at her. Eventually, Brainwave pins her down with a stray fender, and with the cosmic staff just out of her reach. But just as Brainwave goes in for a brain scramble, Pat flicks on the robot’s headlights, blinding the baddie. Courtney then lunges for her staff and jabs it at her foe’s forehead, short-circuiting his brain.

Some time later, we see Junior race to the hospital, where Beth’s mom reports that Henry Sr. was found outside the doors, and now is in a coma — and, ironically, would himself be the best person to get him out of it. Meanwhile, back in his auto shop’s secret room, Pat explained to Courtney that Ted Knight (no, not Judge Smails) was the cosmic staff’s first owner. Pat then announces that he can’t do the hero thing anymore, but Courtney urges him not to “flake out” on her. “The staff chose me,” she says, “and I choose you” — to be her sidekick S.T.R.I.P.E. (as in… well, let’s just say S.H.I.E.L.D. maybe isn’t the clumsiest acronym anymore).

The answer immediately follows, we we see a car pull up late at night to The American Dream. Its driver heads to a sub-sub-sub-basement, where he passes by Solomon Grundy’s heavily armored cell and then arrives at an ISA meeting room, where Mr. Sharpe offers a fuzzy glimpse at what took out Brainwave. Spotting the tell-tale glowing staff, Jordan Mahkent aka Icicle says, “Don’t worry, Steven…. I killed one Starman. I can kill another.”