Homecoming wrapped up a Julia Roberts-less sophomore run with a big bash at Geist headquarters — but for a few key characters, the party’s over.

Season 2’s finale opens the same way the premiere did: with Alex waking up in that rowboat. Now we see that Walter Cruz was the guy on the shore she was waving to who ran off. He peels away in his truck, driving up to the Geist farm in the dead of night. There, he encounters Leonard, who says he used to work at Geist “before the a—holes got to it.” We jump to Leonard snapping at Audrey, insisting he’ll say “whatever the f—k I want” at the Geist party, and then to him ranting at the party, while Bunda cozies up to a pair of guys who want to turn the extract into a vapor you can breathe in. She dismisses the ranting Leonard as a mere “mascot,” as the old man’s speech is interrupted by falling balloons and Fleetwood Mac throbbing through the speakers.

Alex runs up to Audrey at the party, though she has no idea who she is. When Alex insists her name is Jackie Calico, Audrey smiles: That’s their cat’s name. Craig catches up with them and accuses Alex of tasing him — but even though Alex still has the taser in her hand, Audrey calmly insists: “That’s not a taser.” She pulls Alex into her office and explains that she was talking Walter Cruz out of filing a claim against Geist, to help Audrey. “We took care of each other because no one else will,” she reminds Alex, adding that people like Walter Cruz are just collateral damage, essentially. 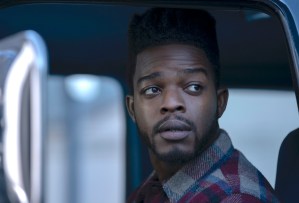 Back to Walter and Leonard: The old guy invites Walter in and shows him his Homecoming file, with his full service record. Walter realizes they erased his memories — “I guess they thought you’d be more useful without it,” Leonard smirks — and when Leonard says he can’t fix it, Walter asks him to “finish it” and just wipe his brain clean. Leonard refuses, but he throws up his hands: The Department of Defense is taking control of the extract, they’re throwing a big party the next day, and there’s nothing he can do. He’s too old, he says. “You’re not old,” Walter counters. “You’ve just got a s–tty attitude.” And we see a sly glimmer in Leonard’s eye…

At the party, Bunda raises a glass and calls for a toast — just as Alex spots Walter in a catering uniform, pushing a cart full of empty jugs with red residue in them (!). She watches helplessly as the crowd takes a big gulp of their drinks… and they all get a little woozy. Alex puts her drink down without a sip, but interestingly, she doesn’t stop Audrey from drinking hers. People start collapsing left and right, as Leonard gives Audrey a salute from the balcony above. Audrey realizes what’s happening to her — she asks Alex, “Is it gonna hurt?” — and tells her she was right about the name Olive for their baby: “That’s a pretty name.” 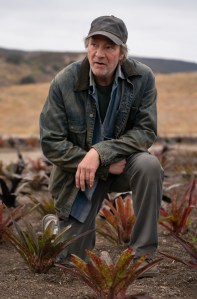 Leonard finds Bunda lying down in his crops, caressing the dirt and saying: “This stuff really works, huh?” She tells him her daughter’s getting married, and she was supposed to give her away — but that’s out now, we guess. When Leonard says he plans to rip up all the extract plants, Bunda scoffs: “What a waste.” She calls him “stubborn” and goes off on a rant about how his view of things isn’t the only correct one, but he stops her: “Those are just song lyrics: sound good, don’t mean anything.” He gives her his hat to protect her from sunburn, and then walks off with his dog.

Walter walks past dozens of passed-out partygoers to find Alex, who’s the only one still awake, sitting next to an unconscious Audrey. She admits she still doesn’t know who she is or what really happened to her… but she doesn’t want Audrey to wake up alone like she did. So she sits by her side as Walter returns to his truck and glances at his file. He sees the name “Heidi Bergman” in there before driving off. Perhaps he’s off to find his old counselor and get some answers?

Grade the Homecoming Season 2 finale, and the season as a whole, in our polls, and then drop your thoughts in a comment below.