On May 23, 2010, ABC’s Lost ended its six-season run with a two-hour finale that drew nearly 14 million viewers and about as many critical think pieces. How does it hold up, a decade later?

Not one to ever really “binge-watch” full seasons of anything — The Job is better spent toggling between individual episodes of a variety of shows — this quarantine freed up the time I had been seeking to give Season 6 a full rewatch, in weekend chunks of four to six episodes. It admittedly got off to a rough start, because going into that final season premiere relatively cold invited confusion. But then again, it did the same when it very first premiered, setting up as it did a “flash-sideways” world that, the more and more you saw of it, never quite made total sense as it first unfolded. (If this was “what might have been,” as one early theory went, why was Sawyer a lawman? With “Enos” as his partner? Why was Jack married to Juliet??)

Giving these 18 episodes a fresh viewing, I remembered things I had forgotten, realized or appreciated anew, such as:

♦ It was practically a part-time occupation just keeping track of which characters were where on the islands, geographically, with whom, and why — because the answer to that changed as frequently as alliances and agendas did. Which was frequently.

♦ Similarly, one had to keep track of who in any given episode was out to use the Ajira plane versus blow it up. And ditto all the above with the submarine.

♦ Oh, the green screen when Jack was inside the lighthouse was bad.

♦ Sun had almost nothing to do for the first half of the season, except occasionally worry aloud where Jin was.

♦ There was an episode set almost entirely in the 1800s, in which we learned how hirsute Ricardo from the Canary Islands came to be the immortal, seemingly eyeliner-wearing (but not) Richard Alpert.

♦ Similarly but to taken to the nth degree, Episode 15 of 18, “Across the Sea,” featured virtually no series regulars as it told the lonnnng-ago origin story of Jacob and the Man in Black. In doing so, it teased the island’s “cork” nature, established the “rules” the two brothers lived (or were constrained) by, and also answered the question of who the “Adam and Eve” skeletons were.

The two-hour finale itself, titled “The End,” played out almost exactly as I remembered. And my favorable opinion of it, especially when compared to others’ (not the Others), is unchanged. With the season finally done moving characters around like chess pieces, the stage was set for tightly wound action sequences, and the Jack/”Locke” cliffside fight is still visually thrilling. Anything inside the glowy cave (aka the Heart of the Island) still is what it is — a lot to take, especially when characters are laboring to lift the heavy stone bathtub stopper. The scene between Hurley and Ben, where the former asks the latter to be his “helper,” is a really sweet character moment elevated by Jorge Garcia and Michael Emerson’s performances.

As for the flashes-sideways…. Yes, they occasionally worked really hard to get characters from Point A to Point B (if I heard one more person yell at Charlie about getting to the concert….). But I had forgotten how instrumental Desmond, for one, had been in making much of it happen, even going so far as to have a great cocktail dress handy for fugitive Kate. And Hurley, too, hanging back with Boone as Sayid and Shannon reunited/shared meaningful forehead touches. Each and every “awakening,” starting with Sun and Jin, then mom-to-very-soon-be Claire/Kate, and perhaps best of all Sawyer/Juliet (“We could go Dutch”), was at the very least wonderful, if not outright eye-welling.

The very final sequence resonates to this day, as Christian helped son Jack come to terms with all that has happened….

“The most important part of your life was the time you spent with these people…. Nobody does it alone, Jack.”

At which point Jack entered the church to reunite with everyone, all showered and in proper clothes, trading smiles, hugs and handshakes. (And if you’re Sayid/Shannon, having the usual eye sex.) 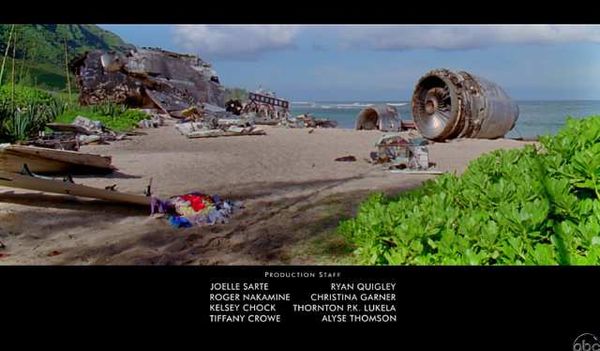 But wait, there’s more! As broadcast on ABC back then — because the network demanded some sort of visual buffer after the somber final image, as a dying Jack’s eyes closed — the closing credits played alongside old, B-roll footage of the Flight 815 wreckage on the beach. I vividly remember covering the show at the time and scrambling to get a publicist on the phone, late that night, to explain what that was all about, seeing as some fans were instantly wildly speculating. Did the video mean it was “all a dream” or something? That the passengers actually all died on impact? Viewers were shook, you have to realize.

Days later, ABC issued a statement, explaining, “The images shown during the end credits of the Lost finale, which included shots of Oceanic 815 on a deserted beach, were not part of the final story but were a visual aid to allow the viewer to decompress before heading into the news.”

But hey, it wouldn’t have been Lost without one final, if inert, “twist.”