The CW’s Batwoman, despite having to end its season earlier than planned, served up some major twists (and one wild reveal) with its freshman finale.

In the name of neutralizing a hometown football hero who had been victimized by falsified brain scans and become a machetes-swinging brute immune to pain, Batwoman suggested to Commander Kane that they combined forces. But after doing so, as the lights popped back on at a blacked-out football stadium, Batwoman realized that the Crows had surrounded her. And then they attempted to riddle her with bullets, though the Scarlet Knight managed to grapple away to safety (as she does).

Elsewhere: Upon learning that the only known bit of Batsuit-defeating kryptonite had been left with the late Lucius Fox and thus seems irretrievable, Mouse urged Alice to move on and leave town with him. Alice agreed, and even ceremonially burned her Alice in Wonderland book… but in actuality poisoned Mouse, tearfully choosing her vendetta over her brother. Alice later gifted Tommy aka Hush with a face that was not so much “new” but quite familiar, in that he now looks exactly like Gotham’s favorite son, the MIA Bruce Wayne! 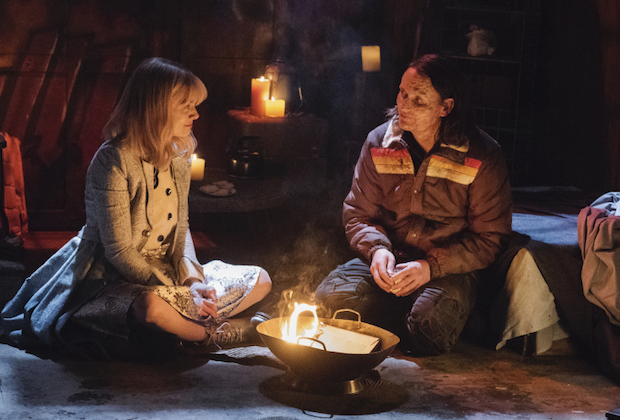 TVLine spoke with Batwoman showrunner Caroline Dries about that “accidentally” thrilling cliffhanger and much more.

TVLINE | Among other things, of course, I feel like we just watched a major turning point for Alice. A line has been crossed.
Yes, it really has. Mouse gave her a very clear ultimatum, and Alice from five episodes ago may have made a different decision. But when she has vengeance in her sights, nothing is stopping her.

TVLINE | That was a heartbreaking scene. Great work from both of them (Rachel Skarsten and Sam Littlefield).
Yeah, they were so good in that scene. It was very moving. I was feeling badly for Alice even though I’m like, “You did this, girl!” 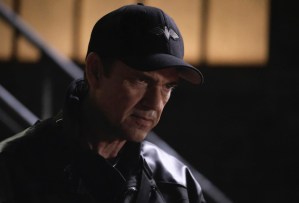 TVLINE | I feel as if Jacob, too, has crossed a line. He was looking borderline obsessed with Batwoman in his final scene….
I refer to this episode as “Jacob Wakes Up in a Very Bad Mood.” We’ve seen glimmers of it before, and it ended up being a nice mirror to the pilot. We touched on it earlier in the season, his disdain for Batman and his now-growing disdain for Batwoman. It came to a head in this episode, and it’s a good “ending” for their dynamic.

TVLINE | When Sophie ran out onto the football field, I thought she might yell out, “No! She’s your daughter!” But that’s probably not her secret to tell.
[Laughs] Yeah, I think we would have liked Sophie in the moment, but then found a way to hate her for blowing Kate’s secret. [Editor’s Note: Plus, Sophie doesn’t know for certain that Kate is Batwoman. Only has suspected!] 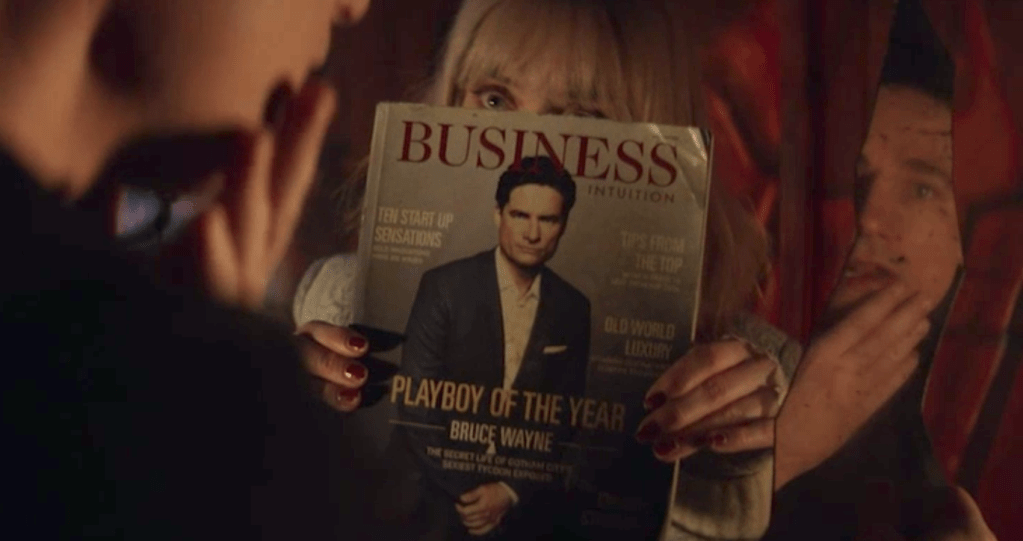 TVLINE | Turning to “Bruce Wayne,” you have to be very satisfied with the accidental season-ending cliffhanger you left us with.
I know! We are really so lucky. The fact is if we had broken [the season] off at [last week’s] Episode 19, or [the unfilmed] Episode 21, we would have had the same feeling, because we try to end all of our shows with an intense cliffhanger. I would have maybe tried to done a little bit more, cliffhanger-wise, with a romance, but I think we made good headway with Sophie and Julia, and teeing up that their relationship is about to get more complicated. 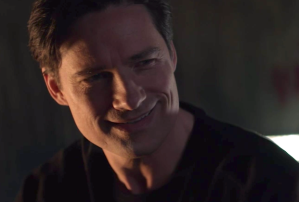 TVLINE | We knew that in the comic books Hush at times wears Bruce Wayne’s face, but I think the other surprise here — unless you spotted his name in the credits, as I did — is that it’s Warren Christie (Alphas, Motive). Which is such perfect casting.
Oh my gosh, he’s such a good actor. He’s been in some of the shows that I have watched, and when I saw his name come up in our casting sessions, I was like, “Um, hello! Yes, obviously.” And then when I met him, for some reason I was holding the blueprints of the Batcave, so I was like, “Oh, let me show you the Batcave! Here’s where this is, here’s where this is….” We were geeking out over it together.

TVLINE | Now remind me — Bruce has been truly missing for several years. Luke couldn’t find him, and he’s never been presumed dead per se.
Correct, he is just MIA. Luke had a little moment in Episode 3 where Kate is like, “Luke, do you really think Bruce is coming back?” and Luke had to say, “No.” In his mind, I think he’s put it to bed, so this is obviously going to open up all of those stories in his life when he comes face to face with his hero.

TVLINE | What sort of challenges might Tommy face passing as Bruce? Or does he know his longtime rival that well he will kind of skate through?
Well, there couldn’t have been a better person to impersonate Bruce. He’s going to have “the Bruce Wayne experience” — he’s not going to waste a moment of his new lifestyle. But he will face obvious obstacles because the people Bruce surrounds himself with are cunning and wise, and they’ve seen antics like this before. Their guards will be up.

TVLINE | Have we seen the last of Gabriel Mann as Tommy?
Not necessarily. Nope. He is so fun to work with…. I don’t have anything really in my mind planned, but when you meet a good actor, you find a way to keep working with them.

TVLINE | Other shows on The CW seem to have ended their abbreviated seasons with 19 episodes. Did you just barely get 20 done? Did it take some crafty moves?
We honestly just got a little bit lucky. When I saw the writing on the wall and saw that production would be shutting down, our last day was the Alice/Mouse storyline, and I was like, “As long as we get this in the can, we have an episode.” It’s an important storyline. We ended up dropping only one day of shooting, the way our schedule fell ahead of the pandemic. Losing one day of shooting sucks — I would have loved to have had those scenes in there — but at the end of the day we had a really solid episode.

TVLINE | Your two uncompleted episodes, do think you will keep them intact over the long hiatus? Or might you get restless and tinker…?
When you are a writer and you have time on your hands, you start tinkering and tinkering…. I’m otherwise just sitting around on my iPad reading comic books, so I get a lot of ideas. The one thing writers don’t ever have is time, so when they get it, they think about making changes.

TVLINE | How would you categorize your planned ending for the season, at the end of Episode 22? Would it have been a twist about what was saw in Season 1, or was it a big fat tease for Season 2?
It was a pretty epic cliffhanger, and a huge crisis for the Bat-team. We are still going to use a lot of that, because it’s also a great launch for the season. It works either way. 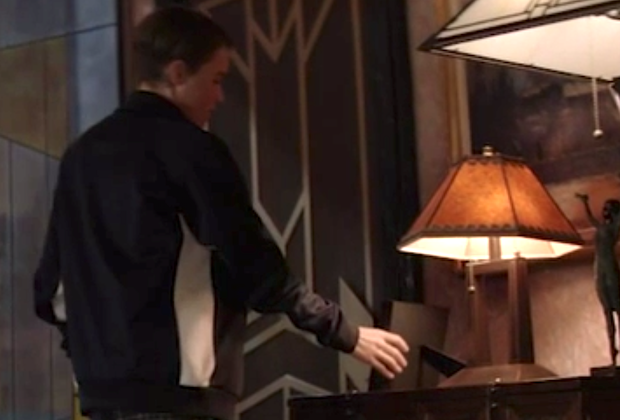 TVLINE | When Kate told Luke and Mary that she needs Supergirl’s OK to part with her bit of kryptonite, that, combined with the “Previously On…,”  had me thinking Kara might show up.
Well, here is one of the COVID setbacks. The frame that Kate swipes the kryptonite out of, that was supposed to be a picture of Kara and Kate. When I saw the cut it said, “INSERT PICTURE OF KARA & KATE.” I was like, “Guys, why is this still in the cut?” They said, “We can’t go and shoot a picture of them together, we’re on lockdown.” So that was kind of a bummer, because I wanted to show that Kate had a picture of Kara in her library, because they’re friends.

TVLINE | Will Kara appear on-screen next season, to give Kate her blessing?
I don’t think so. The way that the Supergirl production schedule is laying out, it doesn’t really line up with ours. We’re just going to have to imply it somehow.

TVLINE | What sequence or episode from Season 1 are you most proud of?
I really liked Batwoman coming out [in Episode 10], and I really liked the train sequence in that episode…. I really appreciate all the stunts that we did, because we tried to make them all feel a bit different. Yes, Batwoman seems to be grappling here and there, coming and going, but we always tried to give a different spin to it. Like in Episode 17, she goes through the spiral staircase, which is really neat. And I really liked the Arkham fight sequence [in Episode 19], which was kind of a one-r which was wide…. In [director] James Bamford’s episode, he had really cool stunts there, and one of the ones I had wanted to do was that Matrix move where the grappling gun is coming at Kate and she bends backwards; I think that turned out well. I’m just really, really proud of our stunts department.

TVLINE | Any last tease about Season 2 (slated to premiere in January 2021)?
It will start from a really shocking place, and continue to be that way as we go.