Katy Keene wrapped its first season on Thursday with a series of bold moves from the Core Four, as well as the unwelcome arrival of a familiar foe.

Before we consult the experts for intel, here’s a quick reminder of how things ended: After rejecting Guy’s job offer and hosting a runway for his previous assistants, she shared a heartbreaking goodbye with K.O., who is finally heading to Philly to train at that prestigious boxing gym. Pepper also sought a brighter future, declaring her intention to leave the scam business, though we suspect Ms. Freesia won’t make it easy for her.

Meanwhile, Jorge rallied the neighborhood to save his family’s home and business, only to learn that the source of his troubles was none other than Riverdale‘s Hiram Lodge; a concerned Josie helped send Alex back to rehab; and after saving Lacy’s from certain doom, Katy confronted Leo (played by Cary Elwes) with her suspicion that he might be her father.

Below, Katy Keene star Lucy Hale and showrunner Michael Grassi break down the biggest twists — both good and bad — from the finale: 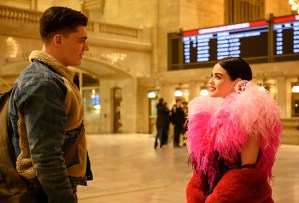 KATY’S CHOICE | “Bittersweet” is the word Hale uses to describe Katy and K.O.’s dramatic farewell in the middle of Grand Central Station. “Part of Katy so badly — and very selfishly — wants him to stay and try to work things out,” the actress tells TVLine. “And I love that she does the unselfish thing in that moment. It really tugs at your heartstrings, because they’re probably endgame. They’ll probably end up together at some point down the line, hopefully, but I’m so glad that she isn’t chasing after a guy. We’re so often shown women, especially young women, feeling like they need a guy to complete them. I like that our characters choose to focus on themselves.”

Adds Grassi, “She let go of someone who was a little simpler, so when things got really complicated with Guy, she thought, ‘Why did I let go of K.O., who would never do anything like that to me?’ She had a huge romantic crisis. What’s really moving about that scene is that K.O. is going to pursue his dream, and she can’t stop him from doing that — it’s what the show has always been about.” 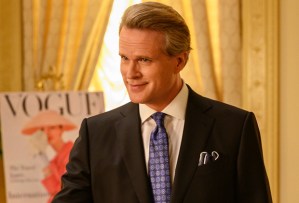 ‘I THINK YOU MAY BE MY FATHER’ | Though she won’t confirm anything, Hale acknowledges that Leo is “definitely a strong contender for Katy’s dad,” adding that everyone in the cast was “over the moon” to get to work with the Princess Bride star. Grassi sheds a little more light on the situation, telling us, “There’s a lot to unpack with that character. He has secret past relationships with more than just one character. Hopefully we’ll be able to dig into all that juicy drama in Season 2. I think he has a bit of a mischievous side, and he’s really going to shake things up at Lacy’s for Katy, Gloria and everyone else.” 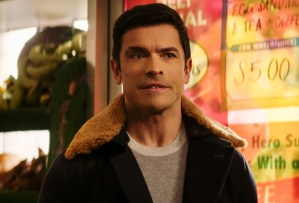 HERE COMES TROUBLE | Riverdale fans likely gasped (and possibly groaned) in unison when Hiram reared his evil, handsome face in Jorge’s family’s bodega, but fear not — Grassi assures us that “Katy Keene will always remain Katy Keene. When Hiram enters the picture, he’s coming into our world, the New York of our imagination. He’ll be a delicious, fun antagonist, but no one is getting murdered… yet.” As he explains, “We wanted to bring a villain in, and there’s no villain we adore more than Mark Consuelos. He’s always shaking things up and keeping everyone on their toes.”

Meanwhile, Hale is just disappointed that she didn’t get to work with Consuelos. “I was like, ‘Why didn’t they write Katy into that scene?'” she says. “From what I understand, Hiram is a bit of a troublemaker, and now he’s come to stir the pot in New York. I hope he comes back a lot more.” (Considering Katy is one of Veronica Lodge’s childhood friends, I imagine that a Hiram-Katy showdown is in the cards.) 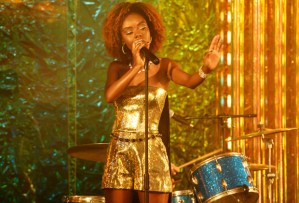 LET THE MUSIC PLAY | And although Alexander may have seen better days, you’ll be happy to know that Josie and the Pussycats have just begun their rise to stardom. “We jumped at the opportunity to bring the Pussycats into Katy Keene and shake things up for Josie,” Grassi says. “More importantly, we were like, ‘What does it look like for Josie as an adult to put this band together? We never got to see that side of her, how she formed her original band. We’ll continue to see the Pussycats moving forward, but I always talk about this show as an origin story. It’s about the climb to success, not the actual success.”

Your thoughts the Katy Keene finale? Season 1 overall? Vote in our polls below, then drop a comment with your full review.