Thirty-nine days, 20 people… and the largest jury Survivor has ever seen. (Oh right, and one Sole-Surviving multi-millionaire!)

Winners at War’s Wednesday-night finale delivered the goods, crowning one cunning castaway with a fat $2 million check. But the road was not easy. An Edge of Extinction player’s epic return reshuffled the deck, as alliances were tested (and re-tested) en route toward an explosive final three. So who was able to outwit, outplay and outlast? Let’s recap and discuss!

EDGE CHALLENGE | We waste no time, diving straight into the battle back challenge. Edge players must race through fence and post obstacles, dig to find ropes that will help them build a bridge, and then sink two balls on a table maze. Despite her three advantages in the challenge, Natalie loses her huge lead by getting caught in the ropes. She catches up to Wendell, but Yul and Parvati aren’t far behind. At the table, Wendell is the first to sink a ball, but Natalie eventually takes the win.

Back at camp, Nat knows the target is going to be directed toward her. She also knows she can spin whatever lies she wants. She starts by telling the tribe that everyone on the Edge is on the Tony bandwagon. Tony knows she can be lying, but for the first time, he looks scared.

IMMUNITY IS BACK UP FOR GRABS | In the episode’s first immunity challenge, players race through obstacles to collect bags of puzzle pieces one at a time. Then, they must climb up a tower and slide down a waterslide after making the drop. The first person to finish a three-tiered puzzle after all bags are collected wins. Ben is the first to the puzzle, but Natalie is hot on his tail. Michele is the last to get back, but the first to complete the first tier… and the first to finish, winning her second immunity in a row. Never underestimate an underdog, y’all. 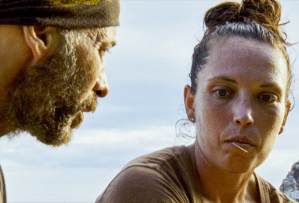 Over rice, Natalie straight-up tells Tony she’s going to look for an idol (HA!), which stirs Tony up even more. Ben tells us he’s learned from his mistakes, and he refuses to see Denise as a number because she’s his friend. Aww. Natalie and Michele want to shake up the game by splitting up the other four. Tony sees it coming, but can’t convince Sarah that Natalie might have an idol.

THE TRIBE HAS SPOKEN | Jeff’s first question is about Natalie’s return, and the “easy vote” of just getting rid of her. Ben mentions that with Natalie, there’s no fact-checking her; anything she says can be true or false. Sarah calls Nat’s return a “blessing” (is it though?). She mentions Survivor‘s highly talked about gender bias, where women are often bashed when they play aggressively, but when men do it, it’s great gameplay. “The biggest weight that’s held me down for two years has been lifted, and it feels great,” she says. Jeff even recognizes his own bias he’s had over the years, which honestly, is about damn time. “You can start calling me Lacina,” Sarah jokes. This is a moment that needed to happen after 20 years of Survivor. Kudos, Sarah. Excuse me, Lacina.

Natalie goes hard at Tony, telling Jeff she told the women they’re giving Tony $2 million. Look, I love Tony’s game this season, but finally, someone is making him sweat! Before the votes are read, Natalie plays her idol, which causes Tony to play his. Then, Ben plays his! It’s a royal flush of idols! Four votes come in for Nat, and none of them count. Neither do two votes for Ben. We go to a re-vote, leaving only Denise and Sarah on the chopping block, and Mama D becomes the next member of the jury.

Immediately after tribal, Tony hunts for the new idol, but when the sun comes up, everyone joins him. Tony’s hustle is impressive, but Natalie beats him to the punch. A successful idol flush and a new idol? Nat’s on a tear.

IMMUNITY #2 | Players must navigate an obstacle course in the water, collecting a key that will unlock sandbags. Then, they have to crawl under a net and land two bags on a target. Ben and Natalie are the first to make it to the target. Even though Ben is the first to land a bag, Tony comes from behind and takes the win. 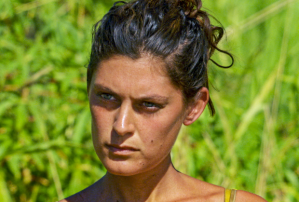 Tony suspects Natalie might have the idol, so up in his spy nest he goes! Sarah and Tone learn about her idol, and with this new information, they know they have to target Michele. But Sarah wonders whether Natalie would play it for Michele. Later, Ben tells Sarah to write his name down and vote him out, so she can build her resume. Ben tells us he doesn’t want to drag her down, and that if she votes him out, at least he’ll have friends, which is way better than money. Ben’s crying, Sarah’s crying… emotions are running high, folks.

THE TRIBE SPEAKS AGAIN | The players discuss how the personal aspects of the game affect them deeply, which viewers at home can’t possibly understand. Michele talks about curbing her expectation since she’s been battling a tough alliance almost all merge. Natalie plays her idol before Jeff reads the votes: Ben is voted out.

FINAL IMMUNITY | With one hand tied behind their backs, players must catch balls as they drop out of an elaborate chute. One ball turns into two, and as each ball passes, a switch forces the next ball to eject from the opposite side. With three balls in motion, Tony drops. Jeff calls for a fourth and Sarah’s out. A fifth ball is added and Michele can’t swing it. Natalie just went from being the first player voted out of the game to the final three, proving that anything is possible in Survivor. What a comeback.

FIRE-MAKING | Natalie chooses to keep Michele safe, which means it’s Tony vs. Sarah in the final four fire-making challenge. It’s neck and neck for most of the challenge, with Tony’s fire dying out and then Sarah’s giving way. Tony’s fire burns through his rope first and the llama-speaking spy earns his seat in the top three.

The next morning, Tony, Nat and Michele slam their Day 39 feast, while Michele recounts having played on the bottom and also having been viewed as an undeserving winner last time around. “I feel like this has closed a wound that has been open for a while,” she says. Natalie recognizes her “non-traditional” path to the final three. “I knew I had the grit and the strength to do what it takes,” she says. Tony knows his greatest challenge is ahead of him, but he’s hoping he can become the King of Survivor.

FINAL TRIBAL | Denise asks the players about their missed opportunities or mistakes, and Tony takes some heat for admitting he doesn’t think he made any. Natalie explains why she pulled away from her Edge tribe after she found things she needed to keep secret. Michele tells the jury how alone she was, always playing from the bottom. Rob asks Natalie why she didn’t take Tony on in the fire-making challenge; she tells them she completely dismantled his alliance, and because of that, she’s at peace with her decision. Michele talks about how fire-tokens left to her gave her power in the game, which really stemmed from her killer social game. These three have all played very different games, with very different paths to the end. To be fair, they would all make a deserving winner… but there can only be one.

We see glimpses of jury votes. Rob votes for Tony to win, while Parvati writes Natalie. Nick mentions that he knows how hard it is to be on the outs the whole time (Michele?), while Ben votes for Tony. Jeff goes to get the votes, which of course he reads live from his garage.

And the winner of Survivor: Winners at War is: Tony Vlachos!

Were you happy Tony won? Does this make him the best player of all time? Grade the finale and season below, then explain yourself in the Comments!