Warning: The following contains spoilers for Wednesday’s pivotal Single Parents Season 2 finale. If you haven’t watched yet, go read — something other than this recap — quietly to yourself.

“I think I’m in love with you.” We waited the entirety of Single Parents’ awesome Season 2 finale for Will to say it to Angie or vice-versa — we weren’t picky — only to find out that before “No. Wait. What? Hold On.” began, one of them had said it, they’d just been too drunk to remember until it was too late. Or was it too late? OMG! Yes, the episode left us as excited as Rory when he smells drama in the air! Read on, and we’ll go over everything, from the morning after to… well, back to the night before. 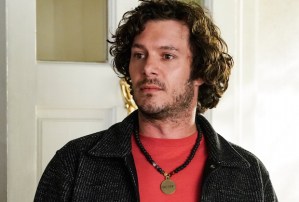 ‘CAN I JUST SAY THAT I AM LOVING THE ENERGY IN THIS ROOM?’ | Picking up where “A Night of Delicate Frenching” left off, the finale began with Will and Angie waking up in each other’s arms. But nothing had happened. Mm-mm. “We’re just two people in the morning who had pizza and chicken wings the night previous,” Will hoped. They weren’t just fine, “we are double fine.” And they proved it by remaining unfazed when their friends came by to see Angie off to Barstow. Graham and Sophie were away at space camp, “so we’re alone,” admitted Angie, “but it’s normal.” Oh yeah, totally normal. So normal that Miggy was right — the muffin he’d scored would probably be all that anyone talked about that day.

Getting back to reality, as Angie admitted privately to Poppy that she couldn’t recall what had happened between her and Will, he was confessing the same thing to Miggy and Douglas. All they knew was that they’d awakened mid-cuddle. Or, as Miggy put it, they’d been “internet.” When Derek arrived to escort Angie to Barstow, the tension was so comically thick, you could’ve cut it with a chainsaw. While she busied her babydaddy with rubber-band ball to untangle, a handsome stranger named Jared showed up. Whoa, exclaimed Miggy. “Angie’s door has become a people factory!” Turned out, the hottie was a subletter that Angie’d found on Craigslist. Oh, Angie, you don’t have time to flirt with the new guy! 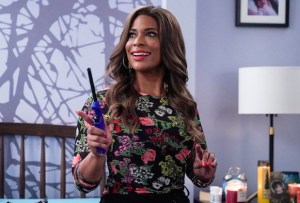 ‘YOU DO LOOK A LITTLE GOOEY’ | After Rory was assigned the task of getting Jared settled in Graham’s room, Angie stole away once more with Poppy. How could she spend the summer with her sexy ex, Angie wondered, if something had happened between her and Will?!? Before the girlfriends had come to any conclusions, Rory interrupted to say that upon being sent away with a strange man — with no objection from his mother, he added — three more of them had shown up. That was on Angie, she admitted. “I cast a wide net online for hot male subletters,” figuring most of them would be no-shows. Once she and her pal had sent Rory back to pick a winner, Poppy tried to jog Angie’s memory with her collection of gas-station candles. Trouble was, she and Will had used them all here and there; it had been like “candle jazz,” she said. Argh!

Meanwhile, Will, alone with his bros, assumed that Angie hated him for cuddling her. They’d had a great friendship, and “I made it weird. I have to apologize to her for the cuddle.” First, though, Derek wanted Will to help him pack the car — translation: fill in some blanks about “the night previous.” It was all too much for Miggy. First Douglas and Poppy had broken up, now Will and Angie — and his phone had updated in the night! He couldn’t take anymore. “I just need help,” interjected Rory, “picking out a hunky subletter for Angie.” Say what? “Oh, your thing has hunks?” asked Miggy. In that case… 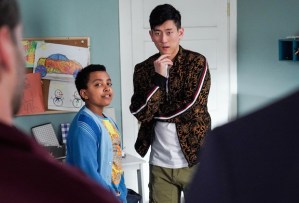 ‘I FEEL SO BEAUTIFUL RIGHT NOW’ | Eventually, Poppy’s aromatherapy yielded a valuable result: Angie’s snowman candle reminded her that — holy s— — she’d cuddled Will, not the other way around! “Oo, Poppy’s scandalized,” said Poppy, er, scandalized. Angie was horrified. “I’m done drinking forever,” she vowed, “except for weekends and holidays and my birthday and Mondays, because Mondays are hard, you know?” Ugh! And what if she’d ruined her friendship with Will, and he didn’t feel the same way? But how did she feel? asked Poppy. Rather than talk to Will, Angie became more determined than ever to run off to Barstow with a torn garbage bag full of her belongings.

While outside Derek gleaned what intel he could from Will, inside Poppy schemed to get Will and Angie alone long enough to talk. To his mortification, Douglas was into it. “I used to be a man!” he marveled. Just when Derek had concluded that Will and Angie’s drunken, candlelit night “sounds pretty sketchy, and thats coming from a guy who once called the cops on himself,” Poppy and Douglas intervened so that Emma and Amy could (cough) give Derek’s Honda a (cough) checkup before Graham’s folks (cough) hit the road. The exes’ ploy successful, Poppy committed girl-on-girl crime to reveal to Will that Angie had feelings for him, too. “You are either helping with this hunk problem,” interjected an annoyed Rory, “or you are sitting and reading quietly to yourself.” 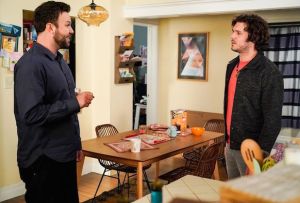 ‘THE STAKES COULD NOT BE HIGHER’ | From then on using hushed tones, Will told Poppy that Angie wants a better life. Duh, replied Poppy. “I think you’re her better life.” And if Angie went to Barstow, she might never come back — Adam Brody was there, for Pete’s sake. So Will had to tell her how he felt. Agreed, said Will. He’d get right to work on the slideshow. Wait, what? said Poppy. “I’m not gonna not do it with a slideshow!” he replied. He even knew the perfect Five for Fighting song to use. “Do not use that song,” Poppy ordered him. You can well imagine how that went. There was no way that Will wasn’t using “100 Years.”

While Miggy tried in vain to pick a subletter, Bachelor style, from three attractive Jareds and a Dave, Derek happened upon Will working on his slideshow. Being the intuitive sort, Derek always knew when his band’s drummer was going to die. (He’d been right two for two times.) So he knew that something was going on between Will and Angie, and thanked Will. Why? “Whatever you’re feeling,” Derek guessed, “you’re not acting on it,” knowing that doing so would keep her and Graham from having a family. So Derek gave Will a big hug. (Television, this is how you do a love triangle. I am as torn as a test paper I got a D on!) 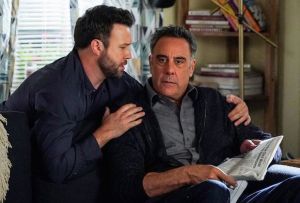 ‘LET’S FOCUS ON THE POSITIVE LIKE… ’ | Following Derek and Will’s tete a tete, the latter found Angie watching his slideshow. “Will, what is this?” she asked. “This is like every moment I’ve had with you since we met,” from storm-chasing to goose-napping. When the presentation ended, the screen flashed, “Turn around, Angie. There’s something I want to say to you.” Which was… ?!? “I want to say… have a good summer in Barstow,” Will lied. Angie gave him a second chance. “That everything?” But he couldn’t take it, not at the risk of costing Graham a shot at having his dad in his day-to-day life.

As Angie and Derek prepared to set off, Miggy and Rory revealed that they’d solved her hunk problem: All of the Jareds and Dave were going to stay at her place and pay rent. Douglas gave Angie a box of Whoppers, prompting her to make him promise not to have any heart attacks till she got back. When it came time to say goodbye to Will, Angie asked him not to finish Gavel Town without her. “And remember to miss me,” she added. Poppy was crushed that she hadn’t been able to get Will and Angie together. But “I haven’t given up yet,” said Douglas (demonstrating some lovely character growth).

‘I THINK I’M IN LOVE WITH YOU’ | After Graham’s parents hit the road, Douglas comforted Will by saying how much he’d liked the slideshow that Sophie’s dad had made him. And yes, Will could even play it for everybody. Hilariously, it, too, included “100 Years.” Meanwhile, en route to Barstow, Angie discovered that Poppy had packed her snowman candle. Suddenly, Angie flashed back to the moment that she’d tucked herself into Will’s “nest” — the moment that he’d drunkenly admitted that he’d fallen for her! Oh, crap! She was running away with the man she wanted… and leaving behind the one that she needed? Awesome finale, no? Grade it in the poll below — included are letters below B, even though I can’t imagine anyone needing them — then hit the comments.