Kimmy Schmidt is back… but what she does next is up to you.

The Netflix comedy returns with an all-new interactive special, Kimmy Vs. the Reverend, where you get to choose what Kimmy and her friends do next, a la Black Mirror: Bandersnatch. We’ve clicked through just about every possible scenario (we think), and it’s a fun, goofy ride; most of the choices just lead to mini detours, rather than full-blown alternate stories, but there are lots of delightful Easter eggs tucked away in there for those patient enough to go back and try every choice. Ready to dive in? 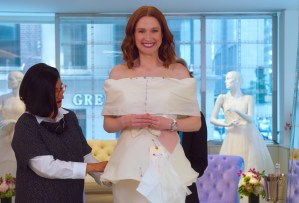 Kimmy starts out shopping for a wedding dress with Jacqueline, Titus and Lillian as she prepares to marry rich British prince Frederick — played by Harry Potter himself, Daniel Radcliffe. Your first choice comes when Kimmy decides between a fun dress or a fancy dress (as far as we can tell, that only affects what she walks down the aisle in later) as Jacqueline gets her client Titus ready to play a Navy SEAL in a big action movie. She wants him to go to the gym to work out… but you can choose for him to take a nap instead.

During a chat with her trusty talking backpack Jan, Kimmy discovers a Choose Your Own Adventure book inside one of Jan’s pockets. She reunites with Frederick, an upbeat doofus who longs to live a normal life with Kimmy somewhere like “Harrisburg, Pennsylvania.” (Yep, they seem like a perfect match.) You can choose to either read the book, plan the wedding or make out with Frederick. The latter choice skips ahead to a happy ending for the pair, then rewinds back to let you choose again, since it skips the whole wedding. But reading the book leads Kimmy to check in with her fellow bunker mates Cyndee, Gretchen and Donna Maria. Gretchen is busy robbing banks in a Hillary Clinton mask, and Donna Maria just encourages her to forget about the Reverend, but Cyndee thinks there might’ve been another girl in the bunker, and maybe the book was hers. So Kimmy is determined to track down the Reverend and get some answers. 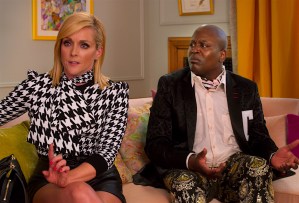 With her fiancé’s private jet waiting, Kimmy has to choose between taking Jacqueline or Titus along on her adventure — and if you choose Jacqueline, her son Buckley pilots the plane and crashes, killing everyone onboard, so Titus it is! Kimmy visits the Reverend in prison (where Jack McBrayer plays a guard), and if you choose to socialize with the Reverend first, he ends up bumping his head and dying, and you have to rewind anyway. When Kimmy gets down to business, the Reverend lets it slip that he had another bunker in West Virginia, with multiple girls still stuck down there. So Kimmy and Titus jet off to a backwater town in West Virginia — if you choose to wait for an Uber, you end up dying of old age — and arrive at a local bar, where Titus sings the Lynyrd Skynyrd classic “Free Bird” to win over the townsfolk. (And he kills it!)

They learn that the Reverend escaped from prison — you can choose whether he used a sneaky plan or karate to escape — and Kimmy and Titus head off on a rider mower to find him. Meanwhile, Jacqueline heads to the set of Titus’ movie to stall them until Titus arrives. You can choose to have her complain about the script, which leads to a mind-numbing lecture about art from the screenwriter, or the wardrobe, which introduces SNL‘s Heidi Gardner as the emotionally fragile costumer. (Both choices are hilarious, in their own way.) Plus, back in New York, Xanthippe is Kimmy’s wedding planner, and when Lillian and Cyndee throw Frederick a “stag night,” he ends up impulsively kissing Lillian (!)… who we later learn looks exactly like his Mary Poppins-esque nanny Fiona. 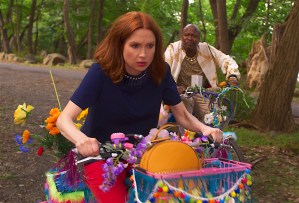 Kimmy and Titus stumble upon a sad music festival in the woods called Festeroo, run by a drugged-out weirdo played by Chris Parnell. (“No one showed up, which is bad, because I brought drugs for a thousand!”) They steal bicycles from him — after Titus takes some psychedelic chocolates for the road — and head to a gas station run by Johnny Knoxville, who leaves them in charge of a baby with a handgun. (You can choose to abandon the baby, but as Mikey reminds us, Kimmy would never do that.) They babysit the kid, and Kimmy discovers a secret message written in lemon juice inside the Choose Your Own Adventure book that leads her right to the Reverend. Oh, and a hallucinating Titus eats leaves and dirt, thinking they’re a sumptuous buffet.

Kimmy catches up with the Reverend, and you can choose to shoot him, stomp him, ‘splode him with a rocket launcher… or spare him. The gorier choices lead to Frederick marrying Xan instead (!) or a lame-brained Kimmy clone — and the Reverend eventually ends up in hell drinking Bud Light Lime-a-Ritas with Mr. Frumpus — but if you spare him, Kimmy stumbles upon the hatch to the Reverend’s other bunker. She frees the girls trapped inside, and then happily walks down the aisle to marry Frederick in her fun or fancy dress. Plus, a woozy Titus accidentally wanders onto the set of his action movie; it was filming in those same West Virginia woods, as luck would have it. It’s a miracle!

That’s not all, though: You can go back and make other choices to unlock more mini scenes. Kimmy gets stuck in an automated phone nightmare when trying to call Donna Maria, and we learn that Kimmy used to date Josh Groban… who has an unbearably squeaky speaking voice. If you try to “Skip Intro” during the theme song, Walter Bankston (aka the “They alive, dammit!” guy) scolds you and makes you sit through an extended remix. And if you get through every iteration, Frederick’s pal “KJ” (that’s Kim Jong-un, played by Bowen Yang) shows up at the wedding, and Kimmy and her friends end with a “Breakfast Club,” awkwardly freezing with their fists in the air while the wedding guests slowly file out around them. As the screen declares, “You Win!”

Give the Kimmy Schmidt special a grade in our poll, and then hit the comments and tell us which choices you made — and if you found anything we missed!