When it comes to heartache, Legends of Tomorrow‘s Nate has been through plenty of it, having said goodbye to several family members, buddies and girlfriends. But thankfully, this Tuesday’s installment (The CW, 9/8c) gives him a reprieve as Nate finds himself becoming a frat bro under the kind of wacky circumstances that only Legends can pull off.

Read on as star Nick Zano previews the “high-stakes comedy” episode and where the Nate/Zari 2.0/Constantine triangle might be headed.

TVLINE | When they announced that Brandon Routh was leaving the show, my first thought was, “Won’t anyone think of poor Nate?! He’s already lost two girlfriends and his dad.” Now he’s lost Behrad, too. How much more can he take?
And don’t forget, I lost my grandfather, too. There’s always loss. That Brandon episode, the Romeo and Juliet one, that one was just a punch in the face to film. When we were doing it, Brandon and I couldn’t even say the words in rehearsal. We just blocked [the scene]. We couldn’t look each other in the eye before we shot, and we couldn’t say the dialogue. So we just did the blocking. And then when we did it, it was just like we felt the magnitude of those months leading up to this moment. It was rough. It’s a huge loss. He’s a huge person, size-wise. It’s a loss equivalent to his mass.

TVLINE | I’m worried that he’s going get his heart broken again by Zari 2.0, because she doesn’t seem as smitten as he is — or is she just not letting herself go there because he is Behrad’s best friend?
At this point in the season, I think Nate has detached from Zari 2.0. It’s complicated, because you have the love of your life, and they’re gone, and now the shell of the person is there with a different operating system. It took a while, this season, for Nate to get past it, but there are still moments where you get lost in a set of eyes, like Nate gets lost in those familiar eyes of his Zari, but it’s not his Zari. It’s a very complicated dynamic, that is for damn sure! 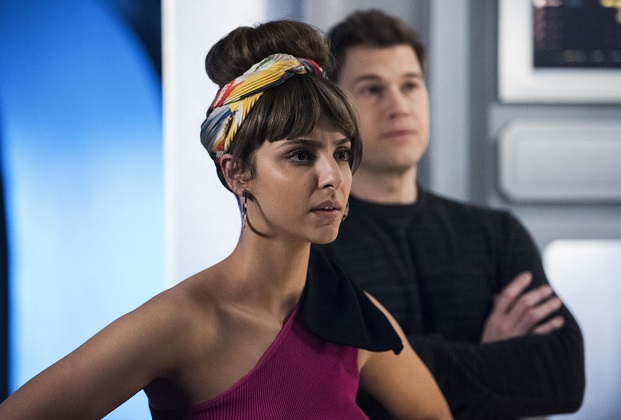 TVLINE | There is something very charming about Nate and this version of Zari, though. Is there any hope at all for the two of them?
I don’t know. The thing about our show is, we’re all on a ship together in a temporal zone. It’s only a matter of time [until] human nature takes over, and we start pairing up. I don’t know. We don’t have that many episodes left, and I think you may get your answer in that window of time.

TVLINE | Speaking of pairings, Zari and Constantine had an interesting almost-kiss moment a couple episodes ago. Does Nate pick up on any vibe between the two of them?
A little bit, but circumstances happen throughout the following episodes of the season that kind of remove him from it. It’s fun just watching Tala [Ashe] and Matt [Ryan] do their thing, because they both have extensive theater backgrounds, and their characters are polar [opposites], and I do enjoy polarities in romantic relationships on screen. So it’s kind of fun, as a viewer in the scenes, to watch them kind of do their thing. They’re both very talented, and they’re doing really great stuff with it. And I also like to watch them geek out on Shakespeare because they both went to Shakespeare camp.

TVLINE | You worked a lot with Tala last season, but she was playing the old Zari at the time. What was your reaction when this new Zari stepped on set?
My reaction was, “Wow, Tala Ashe is a very talented actor.” She built something that was very unique in the first Zari, that was different and standalone in a crowded space. I know that’s difficult to do. And then to be asked to repeat it is a testament to her talent. 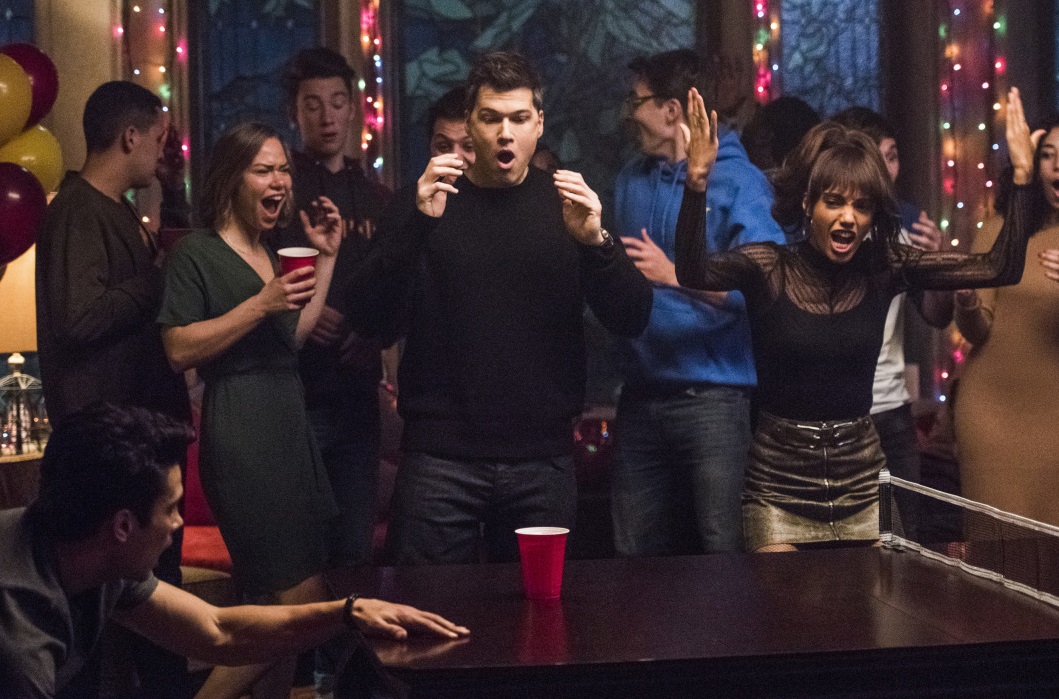 TVLINE | This coming episode, “Freaks and Greeks,” is leaning towards more of the comedy end of the spectrum. What’s going on in this episode?
Oh man, it’s high-stakes comedy. It’s just like, “Save the world through a drinking game.” That is the most Legends tagline ever used to describe our show. Like, “Guys, we’ve got to save the world!” “How?” “Beer pong!”

TVLINE | Even just from the previews, it looks like it’s a very fun episode for Nate and for you, I imagine, on a personal level, too.
It was a super fun episode. I describe it as like Barstool Sports and The Ringer were in charge of Nate for one episode. That’s Shotgun Nate. He gets taken under the spell of a god, and that god kind of swoons Nate, and Nate becomes Shotgun Nate. I had the best time trying to make my co-stars laugh at my portrayal of fraternity Nate. There’s one scene, in particular, that’s my favorite scene from the episode, where [they’re] having a very serious, very rooted-in-reality scene that’s emotion-filled, and Shotgun Nate comes barreling up, and it was such a polar opposite of what was happening in the scene before he walked up that I came into it hot. I just went for it, and I just brought it all to Maisie [Richardson-Sellers]. I saw the rough cut, [and] I think they could not cut out Maisie laughing. If you look close, you’re going to see Maisie losing it right before the cut.