Snowpiercer‘s four-and-a-half year journey to the small screen ends on Sunday, May 17, when it pulls into the proverbial station at TNT. When all is said and done, was it the little engine that could? Or not quite?

What you get out of TV’s Snowpiercer largely depends on what you expect from it. Yes, it is an adaptation of the lauded 2013 film of the same name, which starred Chris Evans and was directed by future Oscar winner Bong Joon-ho, as well as the 1982 French graphic novel Le Transperceneige. But it tells a distinct story set in that same world, where seven years after an attempt to “fix” global warming instead turned the planet into an unlivable ice ball, the remainder of humanity circles the globe aboard the titular 1,001-car train.

As in both pieces of source material, class warfare is a dominant theme, seeing as the Snowpiercer is strictly, brutally segregated by class — with the last car, the “tail,” densely populated by people who literally fought to illegally board the train before its departure, without tickets.

But whereas the film purposely paced out its reveals of the perks availed the front cars (as Evans’ rebellion leader broached carriage upon carriage), the TV series’ premise allows for a more immediate exposure to the third-, second- and first-class sections. Daveed Diggs (Hamilton) stars as Andre Layton, a “tailie” whose pre-“freeze” line of work was as a police detective. As such, when a murder threatens to upend the carefully regulated class structure, Layton is enlisted by Hospitality chief Melanie Cavill (A Beautiful Mind’s Jennifer Connelly) to  begrudgingly travel up-train to solve the case. In the course of this outsider’s closely monitored investigation, he and we are introduced to the assorted cultures and denizens within each section of the train, including an eclectic community known as The Chains, the (remarkably cavernous) Night Car and the aquarium-like Ocean Car. All the while, Mr. Wilford — the visionary, reclusive creator of the train whose name is uttered with reverence — communicates his decisions and edicts via Melanie. 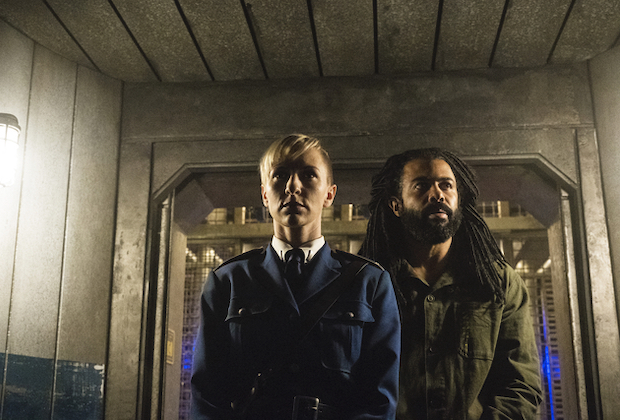 Till keeps a close eye on Layton’s detective work

Other members of the primary cast include — but by no means are limited to! — Alison Wright (The Americans) as Ruth, Melanie’s right-hand woman; Mickey Sumner (Low Winter Sun) as Till, a Brakeman who serves as Layton’s partner; Katie McGuinness (Hollywood) as Josie, an intrepid tailie; Annalise Basso as first-class brat LJ; Sheila Vand (24: Legacy) as Zarah, an old flame of Layton’s/close friend of a murder suspect; Mike O’Malley as Brakeman Roche; and Steven Ogg (Walking Dead) as a tailie whose approach to revolution threatens to be a bit more reckless than Andre’s.

Snowpiercer lumbers out of the gate, and you have to wonder if that is a result of its prolonged, oft-rerouted trip to the screen. Some two years after the film came out and with Bong Joon-ho on board as an EP, the TV series first went into development with Josh Friedman (Terminator: The Sarah Connor Chronicles) as writer. In January 2018, a pilot was ordered to series… though Friedman was replaced as showrunner just weeks later. Scott Derrickson, who directed (and sang the praises of) the original pilot, declined to return for reshoots, citing creative differences with new showrunner Graeme Manson (Orphan Black). (At last year’s Comic-Con, it was revealed that barely any of the original pilot lived on.) In May 2019, the series was curiously bounced from TNT to sister channel TBS… only to be moved back to the drama hub in September.

While Episode 1 overexerts itself juggling multiple storylines (there’s a B-story involving a young tailie that simply vanishes for long stretches), the episodes that follow are more tightly wound as the murder case, which dominates half of the 10-episode season, takes frightful turns. For purists, there are callbacks to several of the film’s more vivid elements, such as the grimy protein bars parsed out to the tailies and the chilling punishment exacted upon those who misbehave. Among the ensemble, Diggs is well-cast as a tailie who ruffles upper-crust feathers; in Episode 4, he has an entertaining sequence that evokes 48 Hours‘ Reggie Hammond raising hell at that honky-tonk. Playing someone more human than Tilda Swinton did in the film, Connelly nicely juggles Melanie’s icy, passengers-facing facade with the MIT and Yale grad’s warmer private life.

Visually, TV’s Snowpiercer is not as claustrophobic as the big-screen version; the individual sets all seem to be as narrow or spacious as they need to be, though always within a certain amount of reason (especially if you are able to buy into the notion of a 1,001-car train). And if the movie ever left you wanting to dive deeper into the various train sections, or learn more about the how of sustaining a society aboard a perpetually moving vehicle, the series (which is already renewed for Season 2) promises to answer such questions.

THE TVLINE BOTTOM LINE: Spread over at least two seasons, TNT’s Snowpiercer will be a longer, less-rollicking ride than the 2013 film. But its version of a subzero dystopia promises to more richly realized.