Villanelle got in touch with her roots this week on Killing Eve… but she still managed to claim a few fresh victims along the way.

Sunday’s episode focused solely on Villanelle and her trip back to her tiny Russian hometown, where “Oksana” reconnected with her mother Tatiana and the family she left behind years ago. That included a little brother who’s adorably obsessed with Elton John; at one point, the family broke out into a goofy sing-along to John’s “Crocodile Rock” that even the hard-hearted Villanelle couldn’t resist.

“She found herself in this place of misfits, and I think she felt more at home than she’s ever felt,” star Jodie Comer tells TVLine. “There’s that scene at the kitchen table where they’re all singing, and she’s like, ‘What the f–k’s going on?’ and then she actually finds something she’s been looking for for so long. I think she has a glimpse into what her life could’ve possibly been like.” 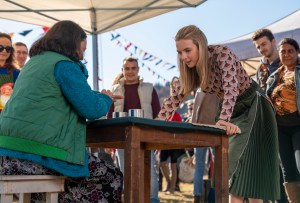 Villanelle started to warm up to country life, attending a local harvest festival and showing off her surprising dung-throwing skills. “The extras in that episode are actually from this tiny village where we shot in Romania,” Comer reveals. “I feel like the cast that came in for that episode were just so brilliant and brought so much energy and kookiness. I really felt like I could see what she loved about them, and how that actually relaxed her, strangely. I think she went there expecting to kill everyone, and then actually when she got there, she strangely found herself at some sort of peace for a little while.”

The peace didn’t last, though: Villanelle was still nursing a grudge against her mom Tatiana for abandoning her as a child, and after Tatiana ordered her to leave, Villanelle torched the family house instead, killing her mother and her less likable relatives. She did spare the young Elton fan, though, warning him in time and leaving him enough money to see the Rocket Man in concert in London. Is Villanelle finally growing a heart? “People are like, ‘That’s so out of character,'” Comer notes, “but what I keep finding as I play her is that she’s ever growing. It becomes more apparent to me that the more we go on with each season, the more we can’t stick to formulas that may have worked in Season 1. It’s hard to keep that up and it not get tedious. We have to grow with her. We have to listen to what it is she’s saying and what she’s experiencing. And I think that felt true to where she’s at right now.”

Killing Eve fans, drop your thoughts on Villanelle’s big episode in the comments below.