The ninth episode of Dead to Me‘s just-dropped second season contained a casting surprise so delightfully cheeky it was borderline Bundy-erful.

At the end of the episode’s cold open, Linda Cardellini’s Judy is seen entering the visitor section of a prison to meet with her incarcerated mother played by — wait for it — co-lead Christina Applegate’s Married With Children mom Katey Sagal. 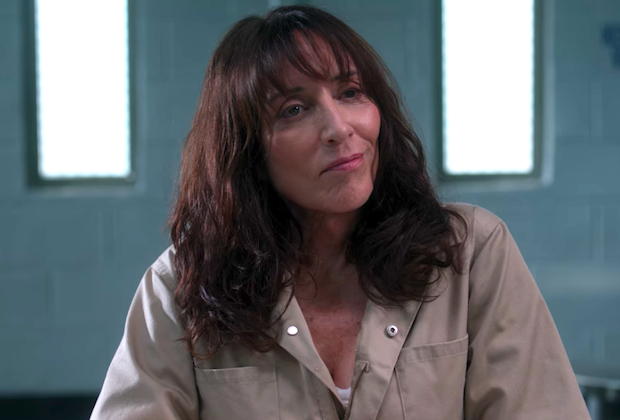 As series creator Liz Feldman explains to TVLine, the idea to introduce Judy’s never-before-seen mom was hatched long before Sagal was tapped for the role. “We knew early in this season that we were going to introduce Judy’s mom, but you have to wait until there’s a script [and] a shoot date… before casting anyone,” she says. “We were looking for somebody that you could really believe would be Judy’s mom, so somebody who looks somewhat like her. But also somebody that could really balance out the comedy and her grit that we were looking for in this woman.”

When Sagal’s name came up, “I just started laughing,” Feldman recalls with a chuckle. “I was like, ‘Oh my God that’s insane and… I love it.’ It was just wonderfully ironic.”

Feldman took the idea to a “thrilled” Applegate (who is also an EP on Dead to Me) who “immediately put in a call to Katey to encourage her to come on board,” the EP recounts. “They’re very close. She was absolutely thrilled. Christina adores Katey. She really is like a mother to her.”

Although Applegate and Sagal do not share any scenes together in Season 2, Feldman is not ruling out the possibility of the actresses formerly known as Kelly and Peg Bundy coming face to face in a potential third season. Asked if fans can hold out hope for such a Married With Children reunion, she responds coyly, “At the very least I want to give you hope.”