This week on Batwoman, ahead of the CW series’ freshman finale, Alice struggled to make sense of the late Lucius Fox’s journal, while a sense of betrayal nearly broke up the Bat-team.

When last we tuned in, Kate had woken up after a hook-up to discover that sweet li’l Reagan had made off with Lucius Fox’s journal. Kate found and confronted Reagan, who insisted that she truly does have feelings for the real estate titan, but she was compelled to do right by her sister aka Magpie. And now she has no idea where the journal is.

Kate’s carelessness irked Luke considerably, how she veritably let Reagan grab it from her nightstand after a sleepover. Words were exchanged, and Luke stormed off. Luke in fact headed over to the Crows, where he grilled Julia about her own interest in the journal, seeing as she didn’t seem to be acting on behalf of either the Crows or the SRR when she sought it out herself.

“Hush” aka Tommy Elliot meanwhile skulked around town in his new get-up, dragging first a cryptology professor and then an NSA agent to Arkham to decode Lucius’ journal — though neither gent proved able (and thus both got electroshocked to death). Hush’s next target was Parker Torres, the teen cyberterrorist Kate met earlier in the season, but Batwoman got wind of the abduction and foiled it. With some helpful mimicry from Mouse, Hush then grabbed Luke himself, bringing Julia along as leverage. Luke could barely make hay of his father’s writings, though he started to discern a pattern, as well as how his own Social Security number played into decoding it.

Meanwhile at the Batcave, Parker was helping track down Luke and Julia when Mary, in the course of going through one of Lucius Fox’s files boxes, found a pair of ordinary eyeglasses that in fact electronically translate his code! Batwoman rushed the specs over to Arkham, beating on a few guards along the way, to trade them to Alice for Luke and Julia.

But what exactly did Kate just turn over to her archenemy? As Alice came to realize, the coded journal is not so much about Wayne technology but specifically how to defeat the Batsuit and thus kill Kate! The thing is, to do so, Alice now needs a little green rock known as…what’s the word…  Kryptonite?

If you are curious, as I was, what exactly those two translated journal pages said, click and zoom below. Easter egg-y! 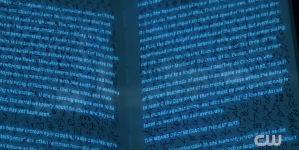 * Following the Arkham infiltration — which wound up releasing scads of prisoners onto the streets — Jacob sternly warned Batwoman to her face that if he lays eyes on her again, “It’s war.”

* Julia confessed to Kate that she was seeking out the journal on behalf of Safiyah Sohail — a woman whose name appears to mean nothing to Kate, though in the comic books the two had quite a “thing” during Kate’s post-military school walkabout. And now that Julia has double-crossed her, they both have targets on their backs.

What did you think of Batwoman’s penultimate episode?