You may think you know Killing Eve‘s Villanelle by now… but it turns out she doesn’t even know herself all that well.

The glamorous assassin travels back home to the Russian motherland this Sunday (BBC America and AMC, 9/8c) to reconnect with her roots, and it kicks off some serious soul-searching for her in Season 3’s back half, star Jodie Comer tells TVLine. “Villanelle goes on such a personal journey… she’s having a complete identity crisis at this point and dealing with a lot of her own personal stuff.”

The episode leaves behind Eve, Carolyn, Konstantin and the rest to focus solely on Villanelle and her rural Russian family, new head writer Suzanne Heathcote teases: “I was really interested in putting Villanelle in an environment that was new to us as much as it was new to her, and to seeing a [new] side of her. That was really why I felt like it had to be her on her own in that episode, because she would never allow that side of herself to be seen by anyone else in the series. So it’s a vulnerability that we just don’t see.” 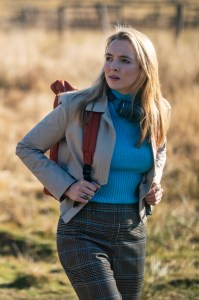 For Comer, the deep dive into Villanelle’s past was a welcome change: “It felt right to kind of give this character some more depth. That’s something I was definitely craving to do… What I enjoy is seeing her in these environments that she’s not used to. Like when she was locked in the house with Julian or when she was in the hospital [in Season 2], these things where she gets kind of thrown off-guard is actually when we discover more about her, as opposed to when she’s got her apartment, and she’s got her money. It’s a different layer that we’re trying to peel away at.”