First up is The Waltons‘ Michael Learned, who as Olivia Walton lorded over a brood of seven kids, with husband John (played by Ralph Waite), in Earl Hamner Jr.’s TV adaptation of his novel Spencer’s Mountain. Following the titular family in rural Virginia during the Great Depression and World War II, The Waltons ran for nine seasons (starting in 1972 on CBS) and spawned a half-dozen TV-movies — the last of which, A Walton Easter, aired in April 1997.

“We were lucky,” Learned warmly noted as our interview below got underway. “We were a good group.” 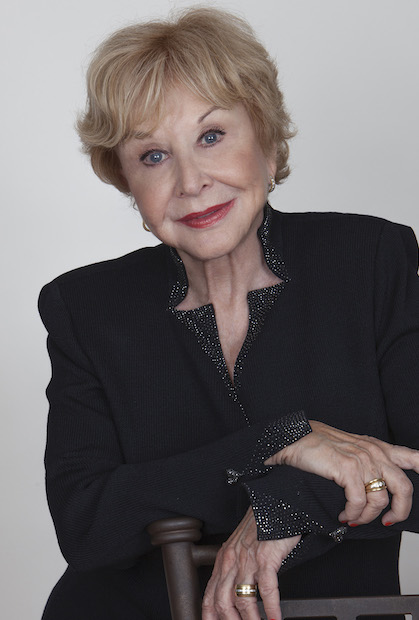 TVLINE | The episode that stuck with, and upset, me as a kid was when Olivia contracted polio.
Ohhh…. You know, [Season 1’s “The Easter Story”] got me my first Emmy, I think. It was the first time they gave me something to really play; before that, I seemed to spend a lot of time pouring coffee and telling kids it was time to go to bed. I said to Earl [Hamney Jr.], “I know this [character] is your mom and kind of an idealized version of motherhood everywhere, but can’t you give me something that’s a little more interesting as an actor? So they wrote me that two-hour polio show, which was a great gift. 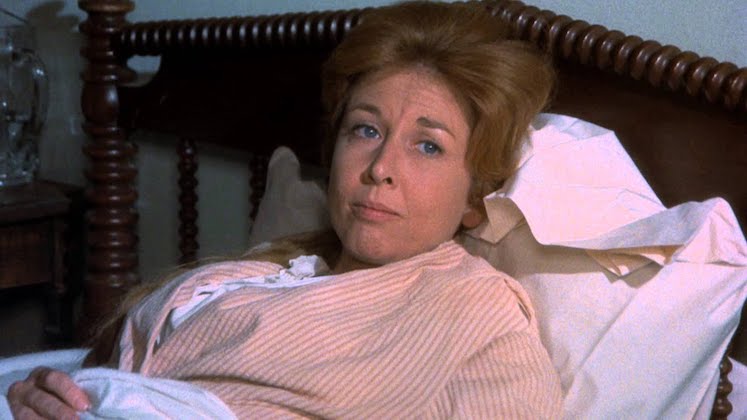 TVLINE | Maybe if affected young me because it spoke to a mother’s vulnerability. And polio was very scary to a preschooler. Plus, it was Olivia Walton — we wanted her to be OK!
That’s so sweet of you. My father had spinal meningitis when he was a kid, so he had one leg shorter than the other. I said, “How come you’re walking, and you seem OK?” I never noticed that he had things built into his shoe to even himself out. He said, “Well, I had to go to the bathroom,” so he got up and walked. And he was supposed to be paralyzed for life. So I said to Earl, “Why don’t we write that into the show? Olivia hears Elizabeth calling her and she just gets up and goes.” And that’s what happened. They were so willing to listen and let us have some input into the show, when we weren’t always polite and well-behaved about it. We were rather arrogant at times, when I look back on it. But I have made many amends to Earl.

TVLINE | You won three Emmys in four years for The Waltons (and earned a fourth years later for CBS’ Nurse). What was that stretch of time like for you?
Well, the first Emmy was a big thrill because I didn’t expect it at all. My son Chris was my date, with his long ’70s hair, braces and a tiny little goatee. [Laughs] We both got all dressed up, I was in my first big gown with a feather boa no less — so Hollywood! — and the makeup people from the show came over for nothing and did my hair…. I had no expectation of winning, and when they called my name, they mispronounced it slightly. It was a female actress and nobody knew who “Michael Learned” was, so I think they were a little confused, like, “This must be a mistake.” So we were just sitting there and suddenly I saw Chris’ eyes go wide like plates, and I realized they were talking about me! What a thrill, I can’t even begin to tell you. 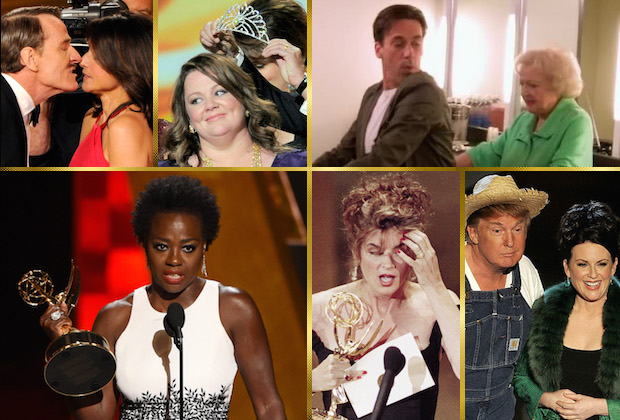 TVLINE | All told, how was it for your own kids, having you being a TV-mom?
I don’t think it bothered them really, but I was away a lot, so sometimes I’d come home after being on-set for 12, 13 hours and they’d be standing at the door — “I need something for my drum set”, “I need this for my trombone,” “You forgot to give me money for school” …. We had a wonderful housekeeper named Mrs. Blair who was a lifesaver for me, I couldn’t have asked for anyone better. She was a little stricter with the kids than I was, and we needed that because I was very permissive as a parent….

TVLINE | So this is a case where on TV you were stricter than in real life.
Absolutely. There was one scene where Olivia is waiting for Reverend Fordwick to come over and she has the kids all dressed in their woolen Sunday best, and there’s this big pitcher of lemonade on the table and she won’t let them have any until the reverend arrives. I would never do that in real life! And I protested at the time. Finally, John Walton comes in and takes them all swimming at the pond. I didn’t win that battle. I won some of them, but I didn’t win that one. 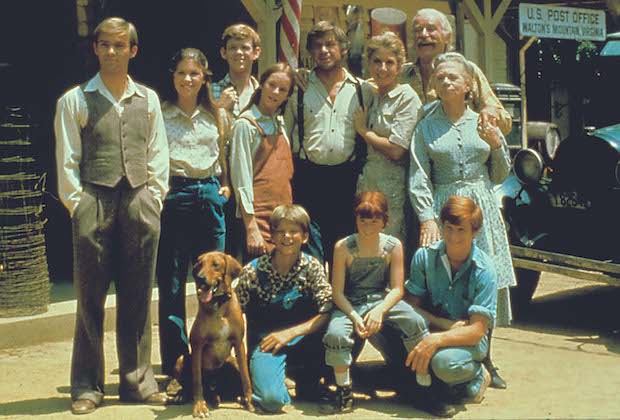 TVLINE | I come from a family of six kids and my father did not look unlike Ralph Waite, so I think that was another reason why I connected with the show. Families that big are not too common.
I’m one of six, too — all girls! Can you imagine? My poor father. My poor mother more than my father, really. A bunch of adolescent girls running around with all their traumas. [Laughs] 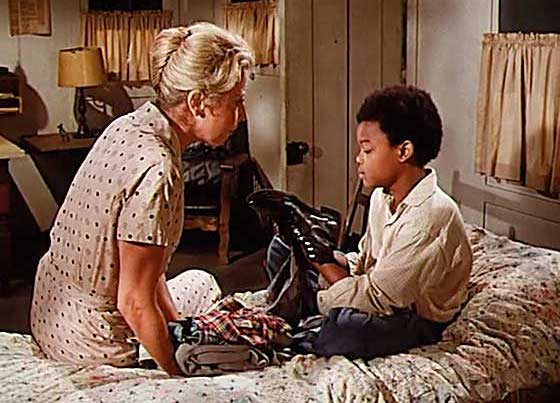 Michael Learned and Todd Bridges in ‘The Stray’

TVLINE | What would you say was the most controversial or daring storyline The Waltons tackled?
I can’t even remember a lot of them because they run together after a while, but there was one that touched me very deeply. It was about the little black boy (played by Diff’rent Strokes‘ Todd Bridges) who we all fell in love with as a family. But we couldn’t keep him in the family because he was black, so we had to take him to Verdie Grant (played by Lynn Hamilton), and that was very painful. They couldn’t keep him in their family because it just wasn’t done in the South at that time. It wasn’t acceptable. John Walton takes him to Verdie Grant, and there’s this shot of John Walton walking away and this little boy looking after him, with his shoes around his neck, and you can just tell from Ralph’s back that he is just dying. It moves me to this day. If I saw it now, I’d start to cry. It was a wonderful opportunity for Lynn Hamilton to really show her stuff as an actor; she’s wonderful. It was a painful subject, but that’s the way it was in the South at the time. 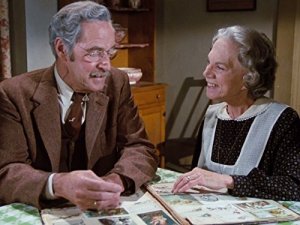 Ellen Corby in ‘The Beau’

TVLINE | I don’t remember how I came across it, but a few weeks ago I was watching a scene with  Ellen Corby after she had her real-life stroke. She had stuck with the show, and this was a full-on storyline for her, where there was a gentleman caller and she as a widow was conflicted about whether to encourage him or not, and the kids were cheering her along….
She did stick with the show. She had to leave for a while, but she came back. And she was amazing, because she couldn’t talk as well as it came across on television. She spoke very slowly, and she would have to practice over and over to sound better than she did in real life.

I remember once when she was trying to tell me something and I just couldn’t get it. I kept saying, “What? What?” And she kept trying to tell me. Finally, after about what seemed like an hour, I said, “Well, why didn’t you say so!” She fell off her chair laughing. She had a wonderful, wonderful attitude about what was a terrible hardship for an actress, having no voice. But she showed up on that set. She was fabulous, I loved her so much.

TVLINE | Very recently on one of the NCIS shows, Richard Thomas (“John-Boy”) played a really shady character. He’s done that a few times over the years.
They love to do that to us. He can play a good shady character as we all can. We love it as actors to show our dark side, legally, and get paid for it. For me it has worked in the reverse — “Oh, we can’t have her do that! She’s the mother of America!” But hopefully that perception has changed by now.

TVLINE | Before we go, what are some things people would be surprised or interested to know about filming The Waltons?
I think people might be shocked that I smoked like a fiend, and so did Ralph. And we were both drinking too much when we started doing the show — I wasn’t a falling-down kind of a drinker, but we’d have a couple of martinis over lunch and come back to set a bit tiddly. But we both got sober. We both quit smoking. So the show, in a way, helped us to heal. And to this day we are all lifelong friends. I feel like the Walton kids are my family, too. They were at my wedding to John [Doherty in 1988], and at one point in the service, they ask, “Who gives this woman to be wedded to this man?” And the Waltons cast and my kids all stood up at the same time and shouted, “We do!” That was terribly moving for me.

The Waltons’ Michael Learned is among the actresses participating in the Hollywood Museum’s postponed but upcoming exhibit about how the role of Mom in Hollywood takes on many different forms in film and TV.