Riverdale wrapped up Season 4 by adding another twist to the videotape voyeur mystery… but we were left thinking about what we didn’t get to see.

Wednesday’s finale was originally slated as the 19th episode of Season 4, but due to the coronavirus pandemic, it ended up becoming the season finale. And it was certainly eventful: After Principal Honey pushed the teens too far by threatening to cancel prom, Jughead penned a short story about them taking deadly revenge on him. In real life, they discovered Honey manufactured a fake video from the voyeur and got him fired because of it, but he insisted he was just trying to keep his students safe. Indeed, Jughead found out that Honey wrote him a warm letter of recommendation to the University of Iowa’s writing program, and Honey took over as Stonewall Prep’s new headmaster. But then they received the voyeur’s latest video: a macabre depiction of the teens stabbing Honey to death, mirroring the events of Jughead’s fictional tale.

Still, Riverdale fans were left asking: Where’s prom? Where’s graduation? Don’t worry… they’re coming. TVLine chatted with Riverdale executive producer Roberto Aguirre-Sacasa, who detailed the thought process behind ending Season 4 on that “shocking, gruesome” cliffhanger and also gave us a sneak peek at what we can expect at the beginning of Season 5. Plus, he addresses Skeet Ulrich and Marisol Nichols’ departures from the show — and promises we haven’t seen the last of the Archie-Betty-Jughead love triangle. 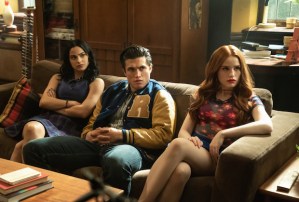 TVLINE | This week’s episode ends up being the season finale, even though it wasn’t written as such. Did you discuss any other options for ending the season, like adding narration or footage from Episode 20?
We had shot about half or two-thirds of Episode 20, which was our senior prom episode. So when we shut down, the first thing I did was I looked at all the footage from Episode 20 to see if we could cobble together a finale from that, or if we could steal footage. And honestly, though we’d shot the prom, which was amazing spectacle and had great emotional stuff, there were so many scenes between Betty and Jughead, and Archie and Veronica, which we hadn’t shot, that it felt like, “Let’s let that episode be.” And then I saw the cut of Episode 19, which I loved. The fun thing about [Episode] 19 is all of the kids are in the story together, which is very rare for us. It had a really fun conceit that made it feel special, which is the story that Jughead is writing. And it had a really shocking, gruesome cliffhanger, which really took the videotape mystery to the next level. So I thought, “You know what? Since we are cutting the season short, maybe the best thing to do is end with [Episode] 19, which is a really strong, fun episode, and then come back and have prom as our season premiere next season.” So we made that decision, and I’m feeling good about it.

TVLINE | Speaking of prom, there were a few things like that and graduation that we were expecting to see at the end of this season. So will those things get tacked on to Season 5?
Yeah, it felt like since we have such big events like prom and graduation, and we’d already written [Episodes] 21 and 22… they’re big, emotional episodes, and there’s a lot of stuff with the characters that we’re still playing out, so it felt like maybe what we’ll do is start with the last three episodes. After being with the kids at the high school for four years, you kind of don’t want to take graduation away from them. So what we’re doing is picking up right where we left off for the first three episodes.

TVLINE | We’ve reported that Skeet Ulrich and Marisol Nichols are leaving the show at the end of the season. Since this is technically the end of Season 4, is this the last we’ll see of them, or will they be back for those three episodes?
No, they’ll be back for those. When this all went down, I reached out to all of the cast, and I reached out to Marisol and Skeet and said that we haven’t finished those stories, and we want to make sure that you guys have great sendoffs. I think Marisol knew what Hermione was going to do. I don’t think Skeet knew yet what F.P. was going to do. The truth of it is, and this isn’t a spoiler, but neither Hermione nor F.P. are being killed. So my hope is that they are a part of Riverdale in a real way as long as there’s a Riverdale. 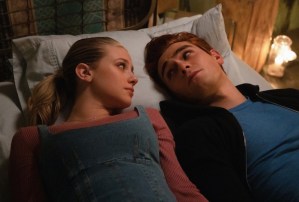 TVLINE | This season’s Archie and Betty scenes set off such a frenzy within the fandom. Betty ultimately put a stop to their relationship before it started, but is that door really closed for good?
The answer is no. We’ve definitely not seen the last of that story. On a basic level, Veronica and Jughead don’t know anything that happened in the bunker or in Archie’s garage, so there’s still absolutely that to play. I think coming out of last week’s episode, it was clear that, whatever had happened with Archie, Betty was reinvesting in her relationship with Jughead, and Archie was sort of more lost and confused than ever. So they were basically in very different places about it, and I think we’re going to play that. In [Episode] 19, because it’s such a fun episode and there’s a conceit in the story, it’s sort of status quo between the four of them. But definitely, there are major, major repercussions for what Betty and Archie did that go down at prom, in true teen drama fashion. So no, we haven’t seen the end of that story by a long shot.

Alright, Riverdale fans, it’s your turn: Give tonight’s Season 4 finale a grade in our poll, and then grab a a booth in the comments below to share your thoughts.