This week on The Flash, Barry needed to repair a post-Crisis rift in order to fend off a returning foe, while Iris found at least one friendly face inside the Mirrorverse.

After speeding over to Joe in WITSEC and apprising him of the Iris situation, Barry looped in Team Flash — including Cisco, who had been spending much off-screen time with Mirror Kamilla. While Cisco worries that the real Kamilla, Iris and Singh are all d-e-a-d, Barry frets over the fact that Eva is in essence faster than him, able as she is to travel in the blink of an eye.  Barry decides to focus on building the artificial Speed Force, but his work is interrupted by the arrival of another Godspeed, who this time uses vibrational “thunder” to extract speed from Barry. When Barry debriefs the team afterward, they surmise that Hartley Rathaway’s specific area of expertise could come in handy. Thing is, Pied Piper and Flash are mortal enemies in this post-Crisis world because, as shown in flashback, Flash critically injured Hartley’s right-hand man, Roderick, during their last scuffle.

Barry goes to Hartley and suggests that his team can make Roderick better, but their first go at it is  a failure. When Hartley flips out, Barry realizes why Hartley feels like his “world is over” — because he and Roderick were in love. Hartley confirms as much when Barry reaches out to him, saying that Roderick is “the love of my life,” and he feels responsible for his condition. Barry tells Hartley — echoing what Nash told him, earlier —  “We’re no good to the people we love if we can’t move forward and forgive ourselves.”

When Barry later is baited into a chase through the city with Godspeed, Flash at one point runs out of speed midway up the side of a building, and begins plummeting to the ground — but Pied Piper shows up in time to vibe him down to a safe landing. The gents then team  up, “crossing streams” (of lightning and sound) to KO Godspeed. Afterward, Godspeed “bleeds” a substance they realize is charged sound, which is precisely the sort of adherent they need to fix Roderick for good, which they then do to Hartley’s great pleasure. Hartley then offers Barry a rejiggered version of his earlier counsel, saying, “You have to do more than forgive yourself — you have to believe your world can change.”

And on that note, Barry gives the team a pep talk, acknowledging all that they have lost but noting that Eva McCullouch has yet to face Team Flash head-on “and that’s about to change. We’re gonna find her, beat her, and get back everyone.” To that end, in the name of breaching the Mirrorverse, Cisco says that they need a perpetual motion machine and he is missing just one component, though he knows where to find it – Atlantis. (Scuba suit up!)

Also of note: this Godspeed was yet another minion/”broken modem” and not the real deal, and he oft spoke of “we” needing to accumulate infinite speed. To whom is he answering…? 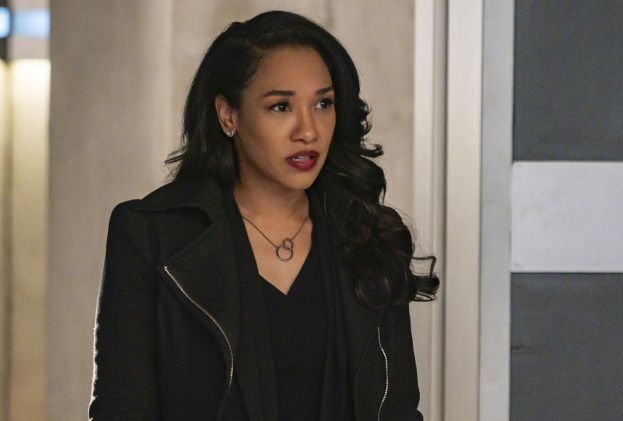 * Iris started recording a video diary for Barry, just in case, before beginning to roam the town and eventually bump into Kamilla, to whom she had to prove she was the real deal. But while Kamilla was rarin’ to analyze items beamed over into the Mirrorverse, the neuro dissonance caught up with and nearly incapacitated Iris, who had to run off.  Later, when Iris kicked herself for letting Eva and her world get to her like this, Kamilla suggested she just needed to learn to trust herself again. The two then set out to find Singh, so they can all — eventually — return together.

* Frost had cold feet about meeting Caitlin’s mother in the name of medical help, but Ralph suggested she was simply rejecting Caity’s mom before she could reject her. One awarded DIB-PLOMA (and a pep talk)later, Frost was ready to get the help she needs.

* In this week’s tag, we saw Eva emerge from a power-up chamber of some sort, located in an abandoned industrial garage somewhere, all supersuited up and declaring, “I’m coming for you, Joseph.”

What did you think of the last episode before the finale?