CBS’ SEAL Team has squarely in its sights the Season 3 finale, which airs this Wednesday in a later time slot, at 10/9c.

In the makeshift season ender (two episodes were left uncompleted), Jason is thinking about their new HVT being the son of a terrorist leader his team took out years ago as he accompanies Mandy on a trip into town, where she will at least try to compensate the widow of a murdered local asset. The rest of Bravo Team meanwhile gets pulled into a time-sensitive mission — without Jason — that just might give them a lead on their target, Azfaar Al-Hazred.

Though the season is ending early, will the finale still deliver a plot twisty punch? TVLine spoke with series lead David Boreanaz about what’s ahead as well as what’s even further ahead, in the event of a Season 4 renewal. 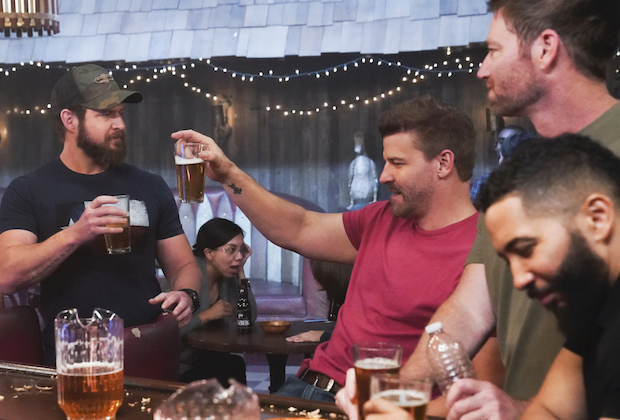 TVLINE | There has been a lot going on this season, with so many things up in the air for each of the guys. They all have decisions to make about their futures. Why do you think Season 3 was the right time to explore this?
Well, it takes a while to get into the development of each character. You have to earn that right to do so. As you start off, you’re blessed to get a pilot and get it picked up, you’re working characters as best as you can, and it takes time to earn that. It’s our jobs as the actors portraying those characters to give the right amount of ingredients along the way to make the audience want to be invested, and I think that’s what we’ve earned. Especially heading into Season 3. With Jason, there was a very deep analysis in Season 2 with him, and Season 3 was just an emotional rollercoaster ride, so I think we earned it.

TVLINE | It seems almost impossible — like, it would take a perfect storm — for Bravo Team to end up 100-percent intact by the end of this shortened season.
We were cut short finishing two episodes — everybody’s had that issue, on other shows — so our season finale was not the way it was supposed to be ended. But [this episode] definitely has an unexpected plot twist for a character, for Jason at least. I will say that. But we do come to some resolve with some characters, which also opens up more doors. When you resolve one specific thing that a character is going through, you open that door and you go through another door, and there are more doors to open. When you do resolve something, there’s always something on the other end saying, “Oh, well, what about this?”

TVLINE | But by the end of the planned finale, if you had gotten to finish Episode 22, would even more closure have been obtained?
[Coming out of] 22 there would have been some uncertainty. But [Episode] 21, there was a major cliffhanger out of 21 going into 22. It would have been a big… how should I say… moment that left you hanging on the edges. 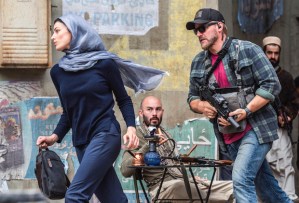 TVLINE | Lindell repeatedly makes a point about how Jason is getting to old for this ish. From what you know, what is the average age of a Tier One Operator? Like, is someone like Jason getting long in the tooth?
I know that there are a lot of operators out there [in that age range] that are still you crushing it, and rolling, so it’s not something that you don’t see. I know that the guy who was on the Bin Laden raid — I won’t say what he did — is still out there leading. So, yeah, I would say it’s a small percentage that get to that age, but they do exist.

TVLINE | What is Jason up to in this early season finale airing on Wednesday?
Well, he’s getting in touch with his past, as far as someone that he hunted down and took out [many years ago]. We saw that in this last episode. By opening that door again, he’s thinking about the person who came after [Asim Al-Hazred] —  the son of the person that Jason actually took out. 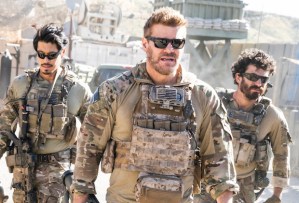 TVLINE | Jason seemed to shrug off that son-of-the-father connection when Thirty, who is such a dick—
[Laughs] He’s great.

TVLINE | Oh my God, he’s the worst. But Thirty was touting this next target as one for the ages, and Jason was like, “It’s just another name on a list.”
I think that’s just where Jason’s head is — he’s kind of like “ignore and override” this season, really to a point of pushing his team and then finding himself being affected by that. I would say that is just his mentality. He’s compartmentalized and forward-focused. It’s also a reference to where he is at the end of Season 3, and where he’s going right now into [Episodes] 21 and 22 — which aren’t done yet. It’s kind of weird to talk about, but he will have to come to grips with that, in 21 and in 22 especially.

TVLINE | I’m curious about the logistics involved with the unfinished episodes. You were in the middle of filming both 21, which you directed, and 22 when the shutdown happened. Like, you had a bit of each done?
Yeah. I was shooting up in Big Bear — and I will say, there’s a lot of snow involved in that episode — and Chris [Chulack] was shooting 22, so we were kind of shooting two days here, two days there…. I had two days left on my episode, and Chris had four days, when all this went down.

TVLINE | So is it as “simple” as eventually finishing up the parts you didn’t get to, if renewed? Or are there continuity concerns?
A lot of things that I’m shooting, the two days I had [left], are present-day Jason and then way-past Jason, back when he was, like, Bravo 3. It’s a very cool episode. It’s pretty awesome. So, there’s this continuity kind of thing happening in terms of how he looks. That’s the biggest thing. 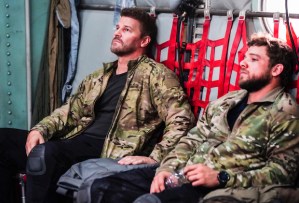 TVLINE | How would you describe the current dynamic between Jason and Clay, who’s still thinking about going STA-21?
I mean, look, they’re brothers. When Clay came on, he was Bravo 6, and you saw Jason teaching this young gun how to operate. He sees a lot of himself in Clay.

TVLINE | And Clay until recently always saw himself as being Bravo 1 some day.
Yeah. Of course. The beauty of our show is that there’s always a bullet, and there’s always someone behind you who’s going to take over. So, whether that’s 1, 2, 3, 4, 5 or 6, you climb the ladder or you don’t make it because what they do is very dangerous. There’s no retake. You’re either going to make it, or you’re going to get killed, or you’re going to have issues, and we’re going to really examine that heading into the end of this season. 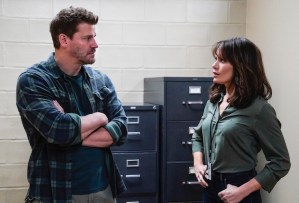 TVLINE | Jason hasn’t talked about Natalie during deployment, and we haven’t really seen him think about her. Do you think he’s failing himself again, as far as having balance in his life? Or is she maybe not the right person?
I think it’s going to take some time. I mean, it may have come on a little maybe too quick, but for Jason, he sees it as some resolve and some calmness in his crazy world. You have to realize, we’re dealing with people that are suffering mentally, they’re compartmentalized, they have PTSD, there’s TBI — especially with Jason’s head injuries — so a lot of that will be examined in a potential Season 4. But I will say that he’s really grappling with that. Again, he’s in a place where he’s very forward-focused. He wants to take care of business, so he’s running away. And we’ll find out what he’s really running away from.