Friday’s episode of The Blacklist threatened to unearth Agent Ressler’s deepest, darkest secret — but thanks to Liz, it will stay buried a while longer.

The nontraditional hour, titled “Brothers,” didn’t involve a usual Case of the Week; rather, it explored Ressler’s relationship with his estranged brother, Robby (played by Brat Pack member Anthony Michael Hall), as they were forced to confront a life-changing experience from their childhoods.

But according to Diego Klattenhoff, who plays the FBI agent, this Ressler-centric episode has been in the works for a long, long time.

“Years ago, [executive producers Jon Bokenkamp and John Eisendrath] had mentioned my backstory and what made Ressler Ressler. They teased me with this great, juicy tale,” Klattenhoff tells TVLine. “And then that got cannibalized along the way, in Season 2 or 3. I was a little disappointed that this really good backstory — this very complicated, big, dark secret — had disappeared… As an actor, it does still sit with you and resonate.”

It wasn’t until the current seventh season that a Ressler-heavy hour finally came to be — but even after the script was written, Klattenhoff wasn’t aware the episode was happening. In fact, “a few of the crew members and one of the producers were telling me, ‘Man, we got the best episode [for you],'” Klattenhoff recalls. “And I’m like, ‘What are you talking about?’ They said, ‘It’s all you and your brother, it’s crazy.'”

“I was shocked nobody had told me and given me a heads-up,” he continues with a laugh. “I was psyched.”

As we learned in Friday’s episode, Ressler’s father — who was also a cop — had been shot and killed in the line of duty, but his death was orchestrated by a corrupt colleague named Tommy Markin. Via flashbacks, we watched as a teenage Ressler realized that Tommy was responsible for his dad’s demise, prompting Ressler to break into Tommy’s house one night and shoot him in the side. In an effort to protect his younger brother from what he’d just done, Robby volunteered to dispose of the body… but just before Robby could dump Tommy in a ditch, Tommy regained consciousness, leaving Robby to kill him for good and bury the body. 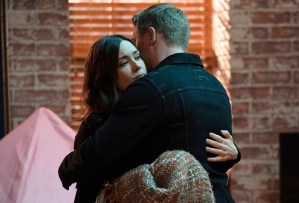 Meanwhile, in the present day, the brothers learned that the field where Tommy had been buried was about to be transformed into an outdoor mall; once the construction crew broke ground, they’d inevitably find Tommy’s corpse on their own. Thus, Ressler and Robby paid a visit to that field in the middle of the night and dug up Tommy’s body themselves — and, after getting sidetracked by some trouble with the Albanian mafia along the way, they agreed the best course of action was to turn themselves in for their adolescent actions.

In the end, though, the brothers did not get in trouble with the law, due to Liz’s interference in the situation. Just as two cops checked the trunk of Robby’s car, where Tommy’s body had been stashed, they found it empty and completely clean. Ressler quickly deduced that Liz was behind the body’s disappearance, and she confirmed his suspicions — but she also made it clear that she saved Ressler for her own benefit, not his. (Her exact words? She sees Ressler as a “tiny island of calm” in her “monsoon” of a life. “And if that weren’t there, I would be swept out to sea,” she said. Aw!)

Per Klattenhoff, this episode will impact Ressler “in many different ways” moving forward, particularly now that he knows Liz’s motivations to help him.

“To tell me how much she needed me — going forward, having that in my mind and knowing those words, we’ll see where that takes us, professionally and personally,” he teases, though he says he doesn’t know if there are plans to pair up Liz and Ressler romantically down the road.

“[Bokenkamp and Eisendrath] haven’t given me any indication one way or the other,” Klattenhoff shares. “I think, either way, it’s great.”

And though Ressler’s brother is not currently slated to appear again, Klattenhoff says this hour has helped Ressler “come to a place of knowing, ‘It wasn’t my fault,'” while also “getting insight into his brother and trying to find some kind of forgiveness for him.”

“You are who you are, and events shape you and your destiny,” he continues. “But I don’t think everything’s perfect [between them]. I really hope Robby Ressler pops up again.”

What did you think of Friday’s Ressler-centric hour? Tell us in the comments section below!