As I suspected: You don’t guest-cast Bonnie Somerville for just any ol’ role.

The NYPD Blue alum returned to familiar territory by appearing in the (early) Season 10 finale of CBS’ Blue Bloods as Paula Hill, a woman who had a special favor to ask of Commissioner Frank Reagan — to get her son, a cop, transferred to a less dangerous assignment. And why would Frank consider this request?

Because the FIU officer in question, Joe Hill (played by Will Hochman), is a grandson Frank never knew about. Because Joe Hill is the late Joe Reagan’s kid. 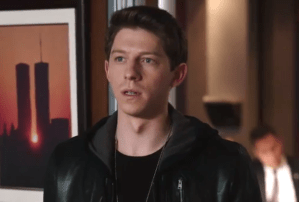 Mind you, the seed for this reveal was planted only a few scenes prior, when Sean shared with his grandpa that through some ancestry site/school assignment, he was matched with a male cousin that no one knows of. Frank, as you can imagine, was a bit bowled over by Paula’s reveal — he has another grandson, and one who’s a cop at that! Frank’s feelings became even more pronounced after he met with the officer, all the while (barely) keeping their relation under wraps.

Frank shared this bombshell with the rest of the family, each of whom was similarly wowed. They agreed that it’d be great to meet this new kin over one of the famous family dinners. That plan hit a snag when Frank told Paula that he would not be obliging her request because, among other reasons, there is never any guarantee that a quieter assignment will be a safer one. Rebuffed and irked, she declared that there would be no further bonding between Joe, whom she had just looped in, and his newfound family.

As it would turn out, though, the next family dinner did have a very special guest, when Sean arrived with his new cousin in tow. Joe made the rounds of introductions, was privy to some familiar teasing, and then sat down with everyone for what promises to be quite the get-to-know-you supper. Though as with last year’s season-ending wedding…. we can only imagine what it looked like. (Nicky and Jack, maybe you can Skype with him some day?)

Elsewhere in the ersatz season finale:

* Eddie got a bit (…or a lot) too attached to a newborn that she and Jamie found in front of the precinct, left inside a duffle bag. And while it was incredibly bittersweet when they eventually tracked down the conflicted birth mom (who had grown leery of the adoption service she had made a deal with), things did seem to leave off with Jamie and Eddie on the same page about making a baby they can call their own.

* Danny and Baez investigated the murder of a key witness in Eric’s prosecution of a neighborhood crime boss, eventually turning up evidence that said thug ordered the hit.

* Erin balked when Anthony aimed to use their resources for personal business, to run a background check on someone — though she wound up coming through, realizing that Anthony is pretty much “family” a la any other favor-asking Reagans.

What did you think of “Family Secrets”? Would you like to add a new Reagan to the mix? (Maybe two, if Jamie and his “hero” get… it… done?)