Our Pawnee pals are together again… although they’re all in different places right now.

Thursday’s Parks and Recreation special brought back Leslie Knope and the Parks Department gang for a one-off scripted reunion to see how they’re all handling the coronavirus pandemic — and to raise much-needed funds for Feeding America. Paul Rudd’s Bobby Newport pops up first from his “private fox-hunting estate” in Switzerland to announce the details of the fundraiser to battle “the cronus” — of which he’s blissfully unaware, somehow. Then Leslie checks in with her husband Ben via Gryzzl video chat and finds him deep in pandemic cabin fever mode, wearing his Letters to Cleo T-shirt and dreaming up a Claymation movie adaptation of his Cones of Dunshire board game. (Yeah, some of us are handling this crisis better than others.) 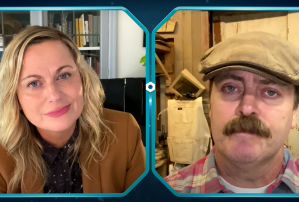 Ever the go-getter, Leslie is maintaining a “phone tree” via video chat to make sure all her old buddies are doing OK while sheltering in place. First, she chats with Ron, who was never a fan of chatting: He says Lagavulin whiskey is the only mental health he needs and offers Leslie some of the venison jerky he’s been making in his cabin. (As for social distancing, “I’ve been social distancing since I was four years old,” he assures her.) She tasks him with calling Garry next, but he winces at that and instead calls April and Andy, who are in separate places because Andy accidentally locked himself in the shed for the past two days. They touch base with Chris and Ann, who are in separate places, too, with Ann volunteering as a nurse and self-isolating just to be safe. Chris has been donating blood four times a week at the CDC’s request, since he’s so ridiculously healthy: “My blood type is just positive!”

Leslie can’t resist saying hi to her beloved Ann, of course, and they add Tom, who has a fake tropical background behind him. (His book tour stop in Bali got cancelled.) All this free time at home has given him lots of weird ideas for new products, including “lasagna that’s also toilet paper.” He doesn’t want to call Garry, either, so he reaches out to his “Treat Yo Self” partner Donna, whose husband Joe is home-schooling their kids: “Every teacher deserves a brand new Mercedes after this.” (Amen to that.) Donna finally bites the bullet and calls Garry, who accidentally puts a series of silly filters on his face, from panting dog to poo emoji. (Dammit, Garry!) We also get a glimpse of local TV personality Joan Callamezzo, who’s hosting At Home With Joan and interviews Leslie and Ben while surrounded by her “friends,” aka a bunch of creepy dolls. (She has an EGOT, she boasts: “I’ve been banned from all four ceremonies!”) Plus, fragrance magnate Dennis Feinstein appears in an ad for his latest cologne: “Miracle Cure,” which promises to wipe out any and all diseases… no matter what those egghead scientists say. 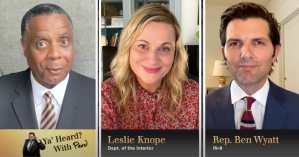 Leslie and Ben also appear on Ya’ Heard With Perd? and talk quarantine survival tips with host Perd Hapley, who’s careful to over-explain everything, as usual. They bring on Andy as Johnny Karate, who explains to kids the importance of washing their hands — which Andy, a 38-year-old man, recently did for the first time ever. Councilman Jamm drops in via an ad where he offers “home dentist delivery” (??) and shows off his “sweet quarantine haircut,” and Jean-Ralphio buys some airtime with the pile of cash he got after he “just got run over by a Porsche.” He’s lonely, so he offers up his phone number for anyone to call him, and adds that he got kicked off of Cameo “for doing my videos naaaaked!” (He sings that last part, naturally.)

Ron and Leslie connect again, and he reveals he has a tied-up Tammy 2 in custody, after she snuck into his cabin unannounced. (Thank goodness Nick Offerman and Megan Mullally are actually married and quarantined together, so we could get this sight gag.) Leslie is still craving more human contact, so Ron arranges a ten-way group chat with the whole Pawnee crew. Andy plays “Bye Bye, Li’l Sebastian” on his guitar while the rest all sing along — but Ben still doesn’t get what all the fuss is about. When Leslie thanks Ron for the gesture, he tells her “it was easy. I just called all of your friends and told them I thought you needed a little help. They cleared their schedules.” (Aw.) He says Tammy 2 escaped by chewing through her ropes (“I’m actually a little worried for the wolves”) before reminding Leslie: “Don’t spend all your time looking after other people. Look after yourself once in a while.” And let’s all hope it doesn’t take another global outbreak to check in with the Pawnee gang again, huh?

Give the Parks and Rec reunion special a grade in our poll, and then hit the comments below to share your thoughts.